THINGS TO DO IN GUCA SERBIA 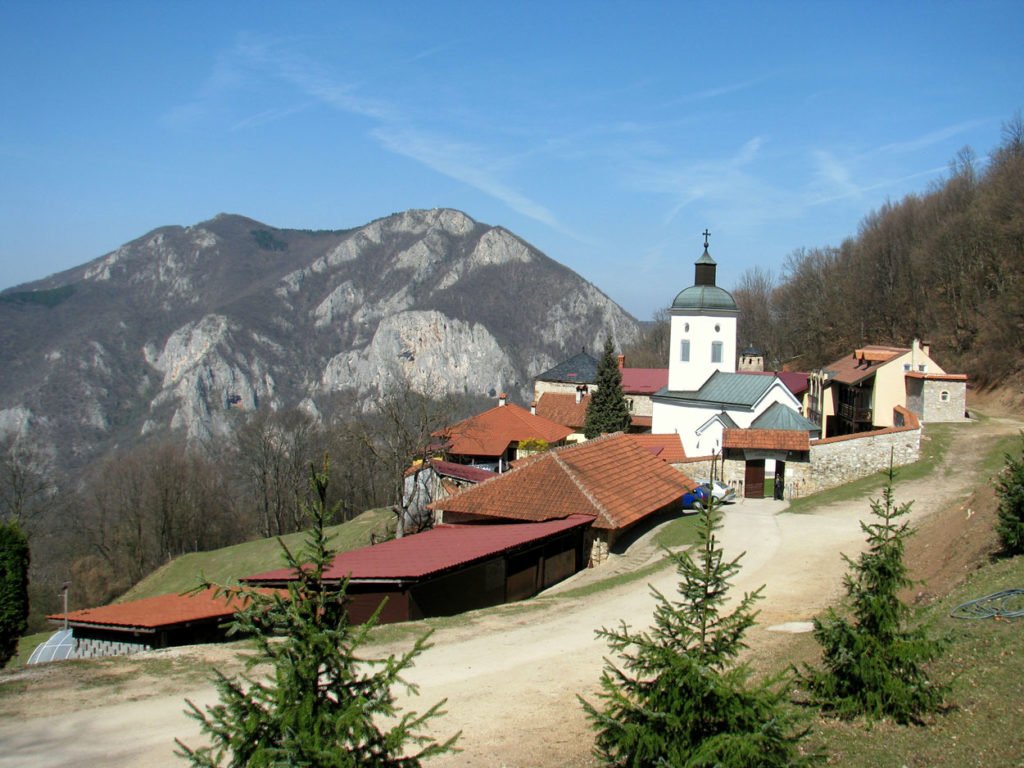 THINGS TO DO IN GUCA SERBIA

There is almost no person interested in Serbia who didn’t hear about Guca and its Trumpet Festival. The same place allured me to visit the area, even though not “at the right time”. This small town is crowded in August, but there are also things to do in Guca Serbia that you can check out all year round.

FROM BELGRADE: about 170 km

If you are coming from Cacak, you will be driving 20 km to Guca, from Ivanjica – 30, from Kraljevo less than 50. And don’t get confused by the directions, as I was. (I was told to contact the Tourism Organization of Dragacevo of the Lucani municipality, but I was actually going to Guca?!) 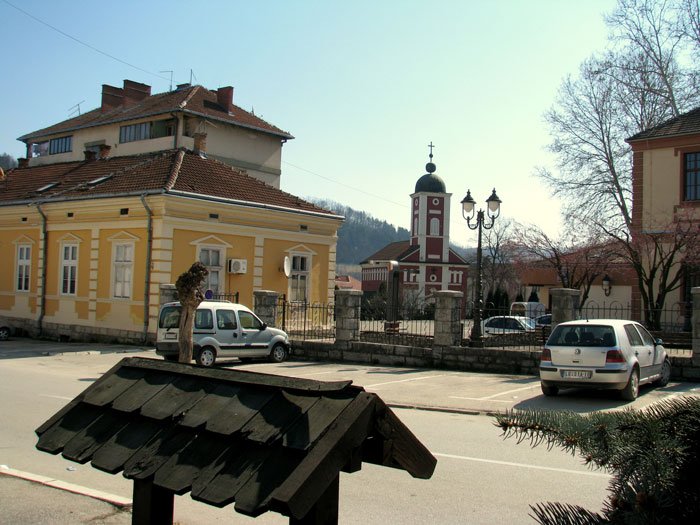 The famous festival gathers around half a million tourists every year. The long brass bands tradition made Guca a capital of trumpet. Next to the local St Archangel Gabriel Church the first Trumpet Festival was held in 1961 with more than 10,000 visitors. Desimir Perisic won the first prize back then.

The highlight of the festival is the brass bands competition which starts with playing the same melody for almost six decades. The main attractions are the trumpet parade, the improvised traditional wedding and various concerts that are held during the festival. 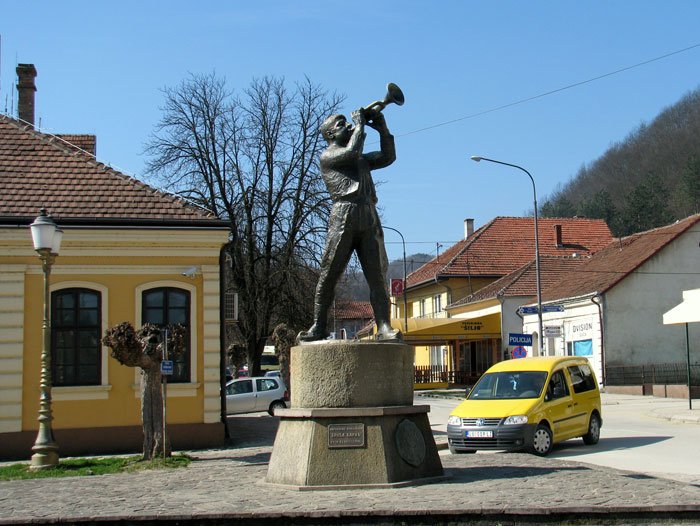 Statue to a trumpet player

And so, when you come to Guca as I did, “at the wrong time” when the spring starts and the summer is still just a notion (the Trumpet Festival takes place in August), you might think that you will miss trumpets all together. Never the less, when getting close to the town you will see the monument to Desimir Perisic, the first winner, with a trumpet in his hands. Driving few more minutes will get you to the very center and – the trumpet player statue on the main square. When turning left, there is a museum to be seen – the Trumpet Museum.

No confusion there, it’s clear where you are! 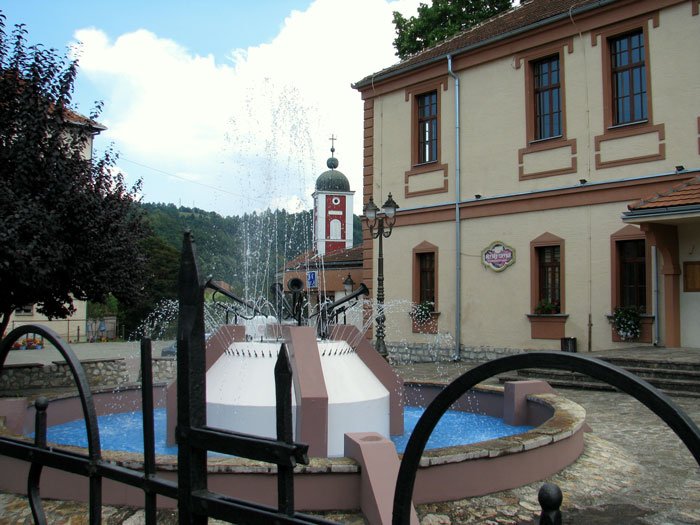 In front of the museum, there is a sculpture-fountain decorated with – well, trumpets, of course. The nice beige building is home to the main exhibition dedicated to the Trumpet Festival. This is the place to learn about the customs of the area, to read more about the manifestation itself and its origins, but also to see a few famous trumpets that were used throughout decades. Rade from the Tourism Organization took me around, giving me the opportunity to make a few video clips with authentic music in the background that became more than a trademark here. 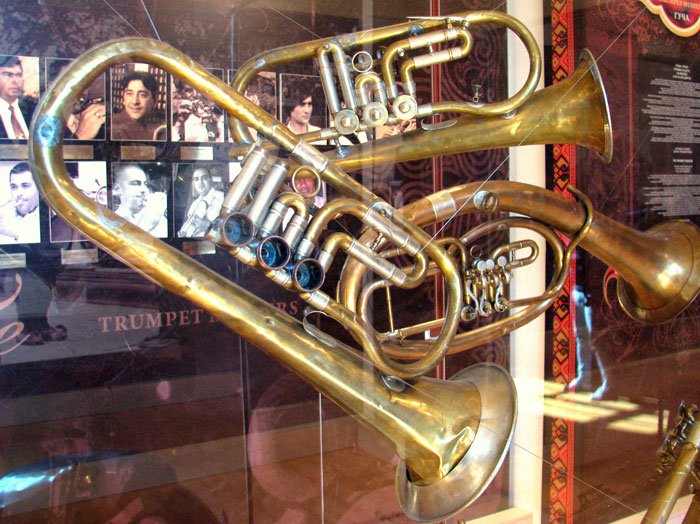 The Cultural and Sports Center which is the main organizer of the festival is across the street. Next to the cinema, library, etc., it also houses the Dragacevo Tourism Organization office. 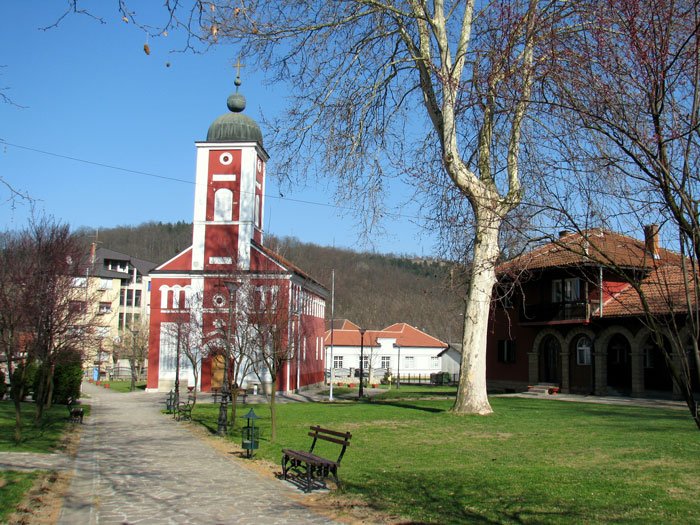 Speaking of things to do in Guca Serbia, one should also visit the St Archangel Gabriel Church that dates back to the 18th century and was supported by the former Serbian ruler Milos Obrenovic “with 1,000 groats”. Its red façade dominates the landscape. (I went by Guca again later in the summer, had a drink with Rade and saw what the town looks like when everything flourishes and turns green.) 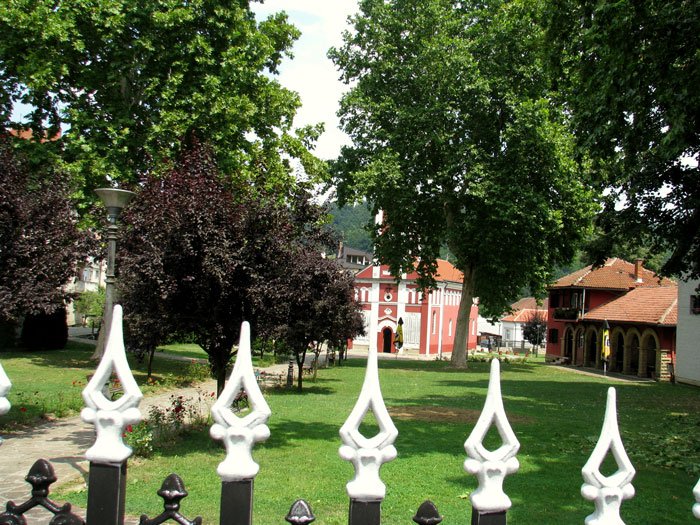 There are a few tombstones and roadside monuments painted blue to be seen in the church courtyard, even though there is a separate Lapidarium to be seen in Guca. In this pleasant courtyard, one can take a break in the shade and then step out to the trumpet player statue through the heavy iron gate. If you need refreshments (or as in my case a place with wi-fi to do some work), there are cafés on both sides of the street. 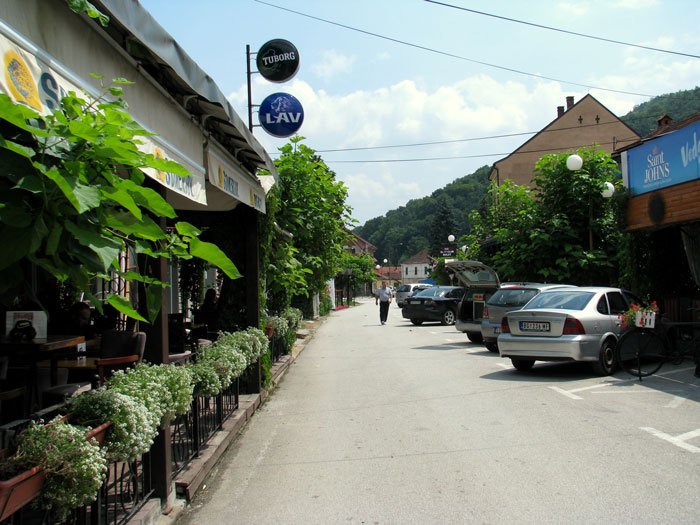 Lapidarium is a couple of minutes away. It displays 33 tombstones and roadside monuments with some dating back to the 19th century.

I was visiting Guca during weekend when the whole town was quiet. Even the nearby school was empty. Monuments came to look even more mysterious under the shade of surrounding trees. One can recognize inscriptions and faces carved into them. Some were adorned by leaves and flowers, and others by – trumpets, of course. 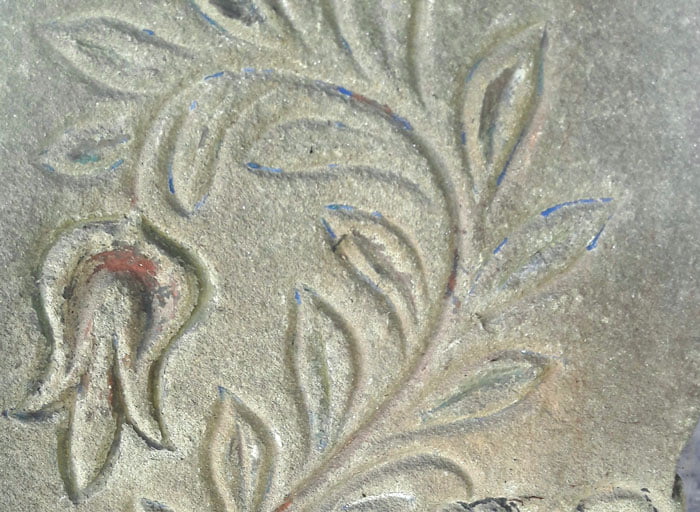 Dragacevo is the valley in western Serbia tucked between the three mountains – Ovcar, Jelica, and Cemerno. It covers the area of 661 square kilometers where two-thirds of it is under the authority of Lucani municipality. The main tourist attraction is first and foremost Guca.

The small town of Lucani is located on the bank of Bjelica river. According to the last poll, the population was 3,888. The town was mentioned in Turkish files in 1476 for the first time. Its name is most likely related to street torches that were once used to illuminate the settlement. 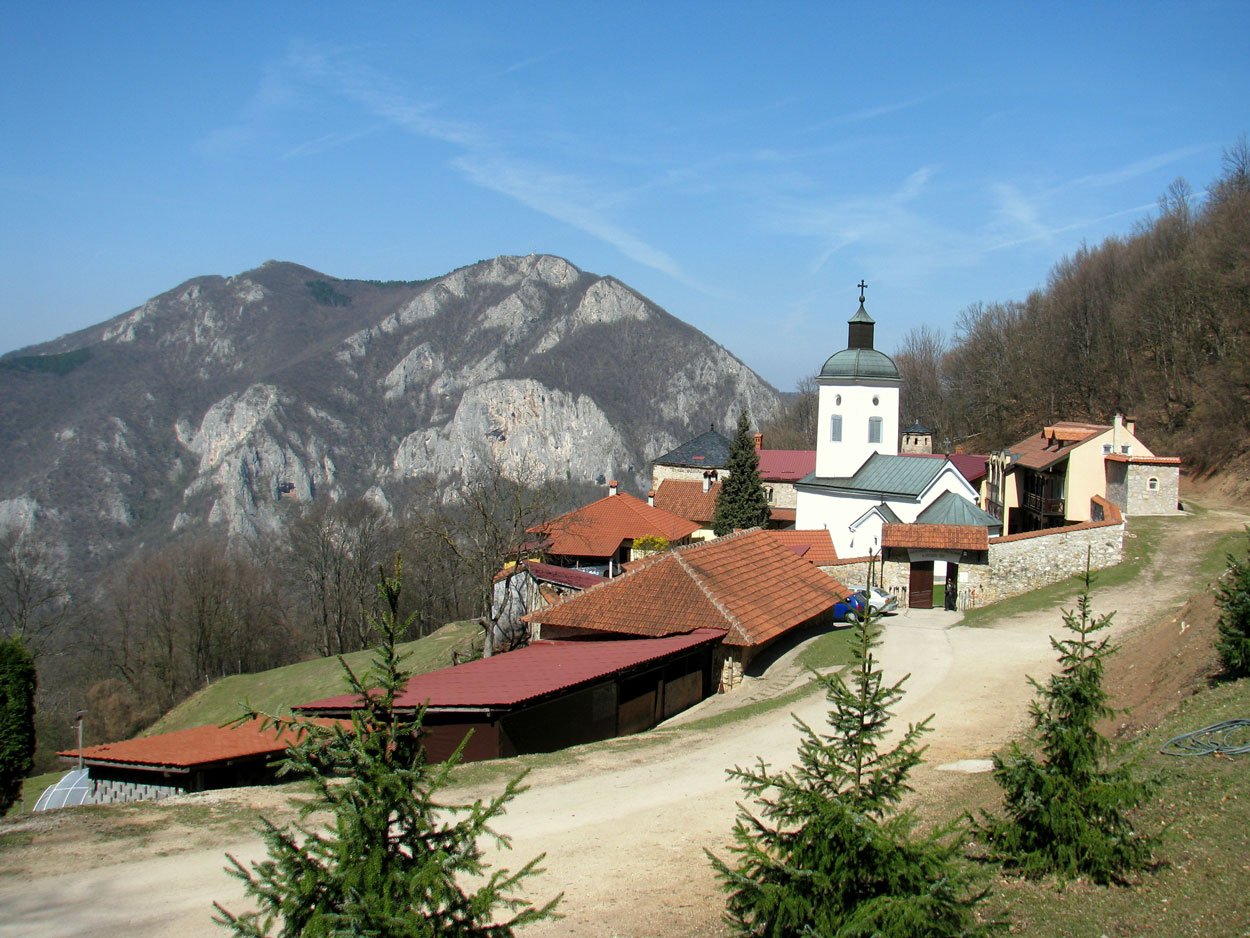 Rivers Bjelica and Zapadna Morava flow through Dragacevo valley. Since I previously visited Cacak and Kablar, and the other bank of Zapadna Morava, now was the time to climb the Ovcar mountain on this side of the river.

While driving through the valley with some breathtaking views all around, Rade is telling me that we have 20 more km to cover in order to visit the two medieval monasteries – St Trojice and Sretenje. The Ovcar-Kablar Gorge is often referred to as the “Serbian Mt Athos” after all, and Ovcar should definitely be on the list of things to do in Guca Serbia. 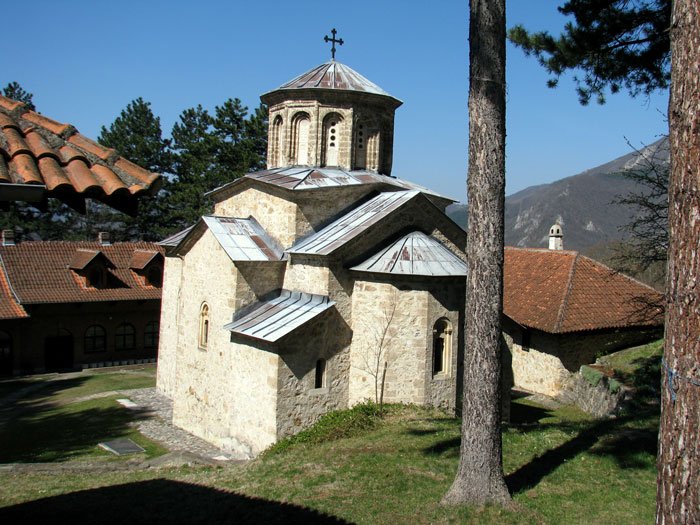 They say that the St Trojice monastery is one of the most beautiful in the gorge. The road turns to one of the hills, but up until the 1980s, there was no road here. (It makes you wonder how extremely inaccessible this must have been when monks came in the gorge centuries ago to establish all those medieval monasteries – all 10 of them!) 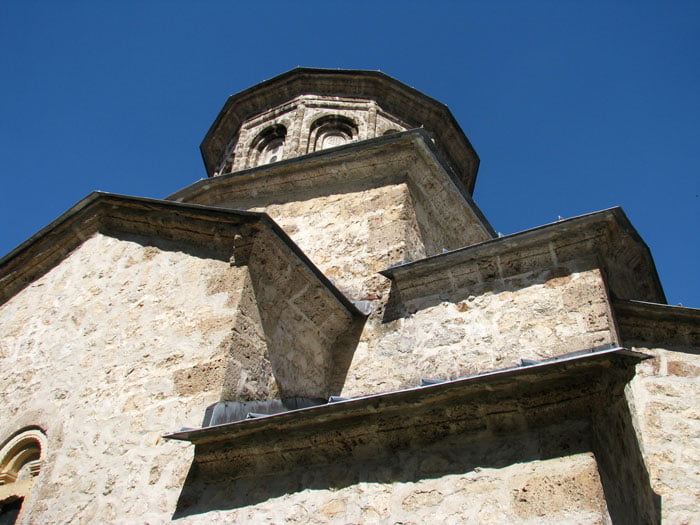 One of the monks welcomes us at the gate, along with a group of tourists from Bosnia and Herzegovina. Three monks and two old nuns live here today. St Trojice was built in the 16th century and restored a few times afterward. The monk says that it has never been frescoed in answering my question about the interior. 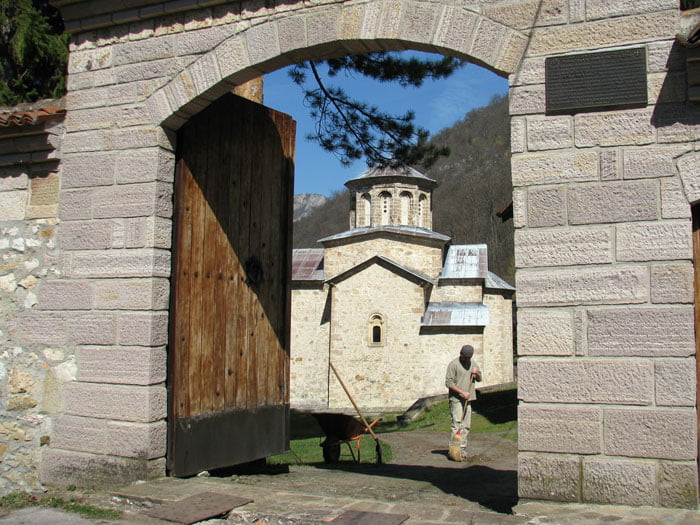 Gate at the entrance

Rade was patient enough to wait while I strolled the courtyard in order to make more photos, taking me to Sretenje monastery next. This is the female monastery with about 20 nuns living here nowadays. It settled on the mountain cliff, surrounded by forest, with beautiful views of the opposite Kablar mountain. 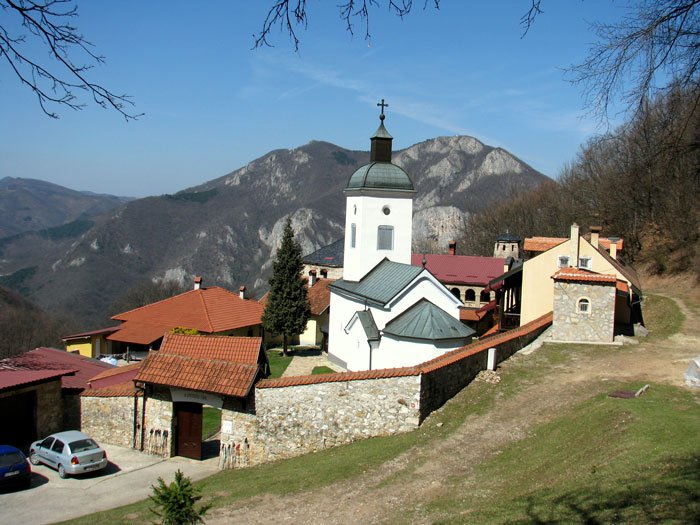 I was trying to take as many pictures as I could, going up the hill and then down to the gate, squatting numerous times and bending in accordance with the camera – while Rade was silently taking shots of my ridiculous positions. A lovely white church adorns the courtyard with wooden terrace all around the complex. One of the nuns welcomes us to sit down and rest bringing us coffee and some cherry cake. 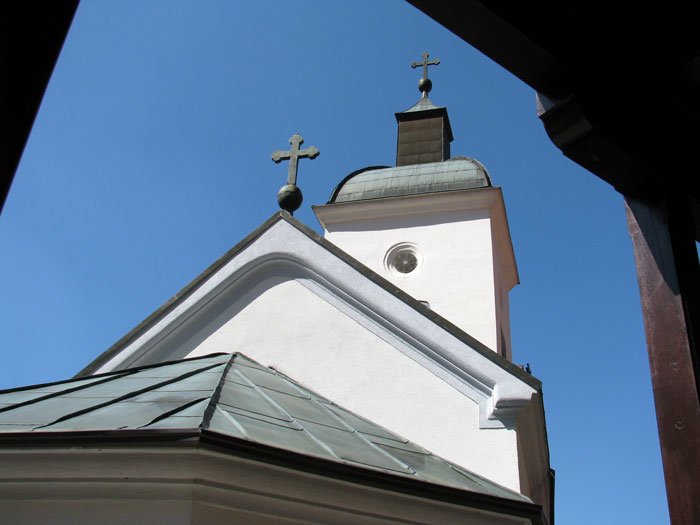 White church at the complex

A young couple sits at the same table with a baby, all with rosy cheeks. They say that they drove to the Ovcar foothill, left their car there, thinking that the monastery “couldn’t be that far up”.

“I was telling myself ‘It has to be after this turn!’ – over and over again”, says the young mother, admitting that the climb was harder than she expected. It took them a few hours to get here. 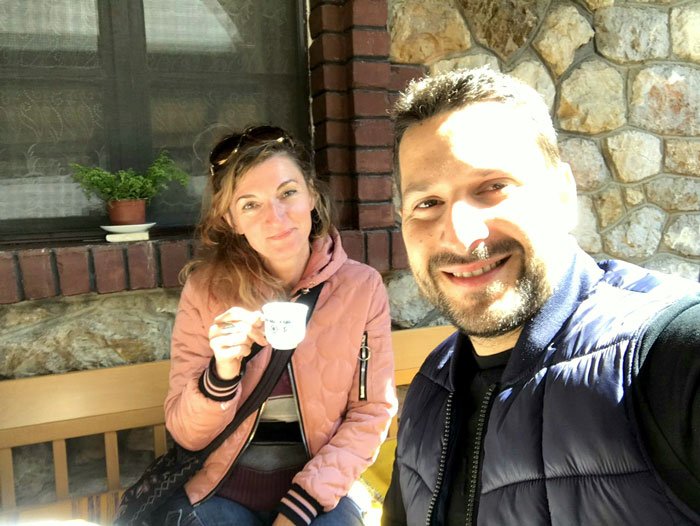 Having coffee with Rade

Rade was showing me the photos – there I was, Danijela with her hair all messed up trying to get another good shot from the impossible angle. While we laugh, having some more of that delicious cake, a group of mountaineers stands up slowly on our left. They climbed up here, rested a bit at the monastery, and now they were off to the highest peak of Ovcar. That young couple was still on the opposite side of our table… One can’t help but blush while driving from the parking lot. But that wasn’t the same blush due to a climb that was written all over those rosy cheeks of other monastery visitors that day. 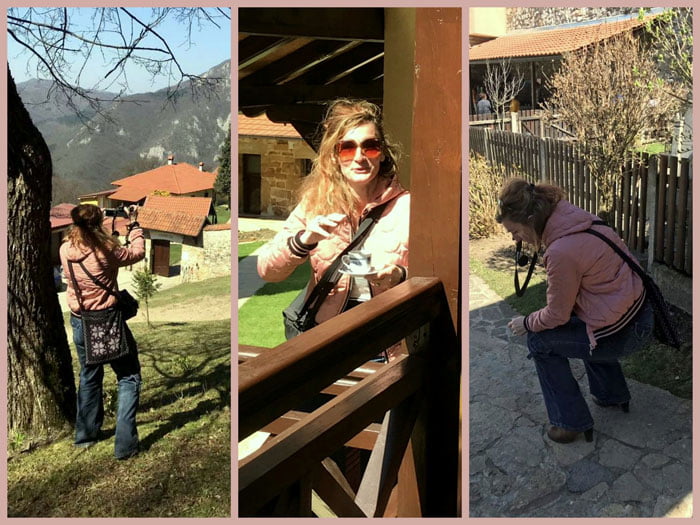 On our way back we were suggested to stop by Milatovici village where our host Vladimir makes rakija, Serbian national drink, called “Dragacevka zlatna” with 30 percent of old types of plums. Given that his family grows plums for over 150 years and makes rakija for domestic purposes, Vladimir also started to produce his “Dragacevka” seven years ago. While he is showing us around, saying that his rakija is mostly bought online, his wife brings out various traditional dishes. 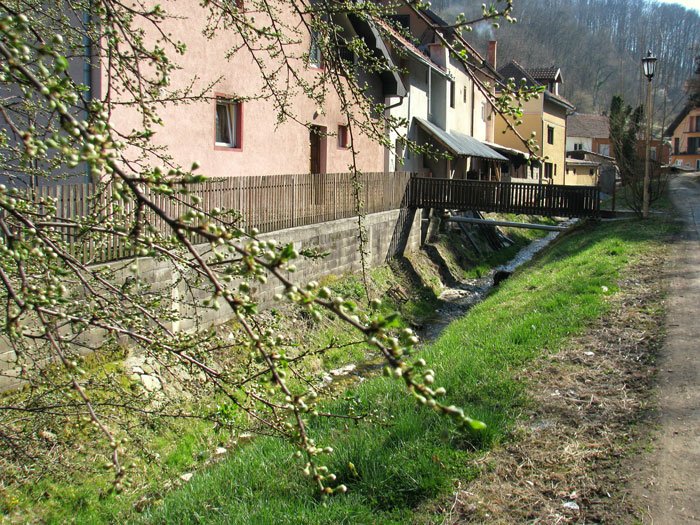 At the same table – the owner of the “Brocica avlija” restaurant, the establishment that offers traditional food and accommodation in Guca. As it says on the website I was referred to, the family bought old cottages from surrounding villages, moved them to Guca and opened the settlement. 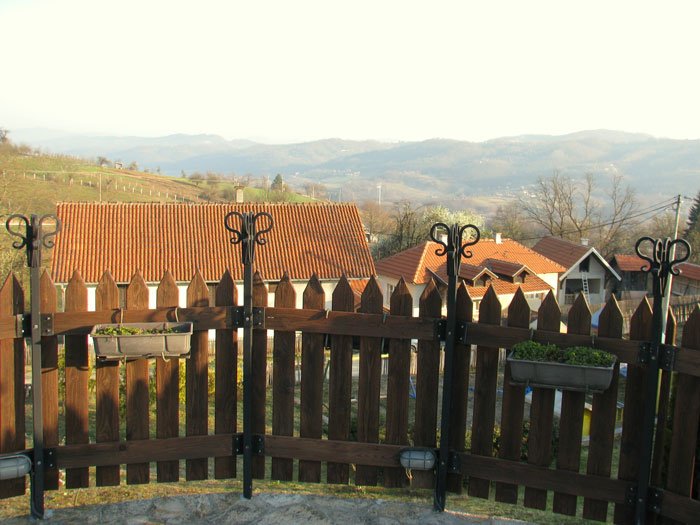 Speaking of traditional accommodation, I was a bit surprised to be recommended to sleep 8 km away from Guca in Gornja Kravarica village which seemed a bit hard to find in the dark, driving up the hill and along sharp curves. Still, when I woke up and found a warm, crusty bun with ‘prsuta’ in the kitchen, while the traditional ‘kacamak’ with ‘kaymak’ was steaming from the table – it was all clear! The complex is owned by Radicevici who built numerous accommodation houses accompanied by a restaurant, a swimming pool, and other facilities, and named it “Vajati”. They make their own ‘kaymak’ and white cheese, but also raspberry, currants, blueberry, strawberry juice. My host Vladan says over breakfast that they opened in 2006, even though there was no proper road to the village until 2017. The capacity is 30 beds and the season takes off in May. 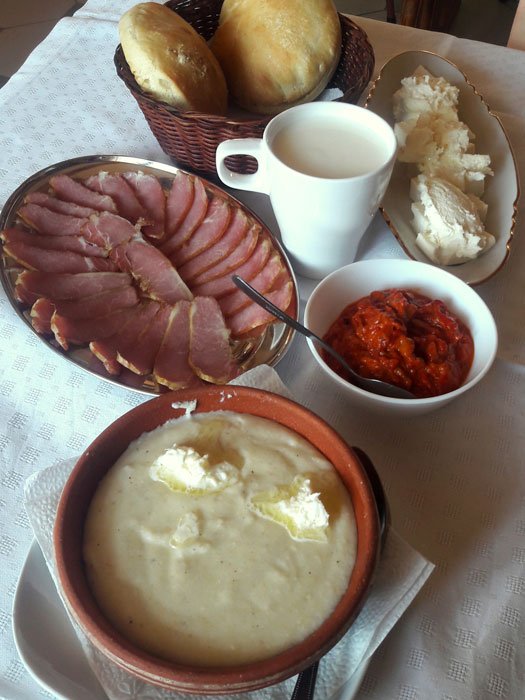 And so, I drove down to Guca the next morning, trying to do some work in one of the cafés. Rade brought me a T-shirt with the inscription “Guca rules” and made me wear it while we were sitting at the “5+” bar. Across the street another café – “Hemingway”…

…That reminded me of my trip to Havana Cuba years ago, when I was rushing around trying to find the villa that belonged to Ernest Hemingway, but also of Ronda in Spain that I loved, where Hemingway was a regular guest. And look, I stumbled upon his name again. In Serbia. In the middle of Guca!

Next from Serbia: MAGICAL PESTER VALLEY

The full Weekend In Serbia section 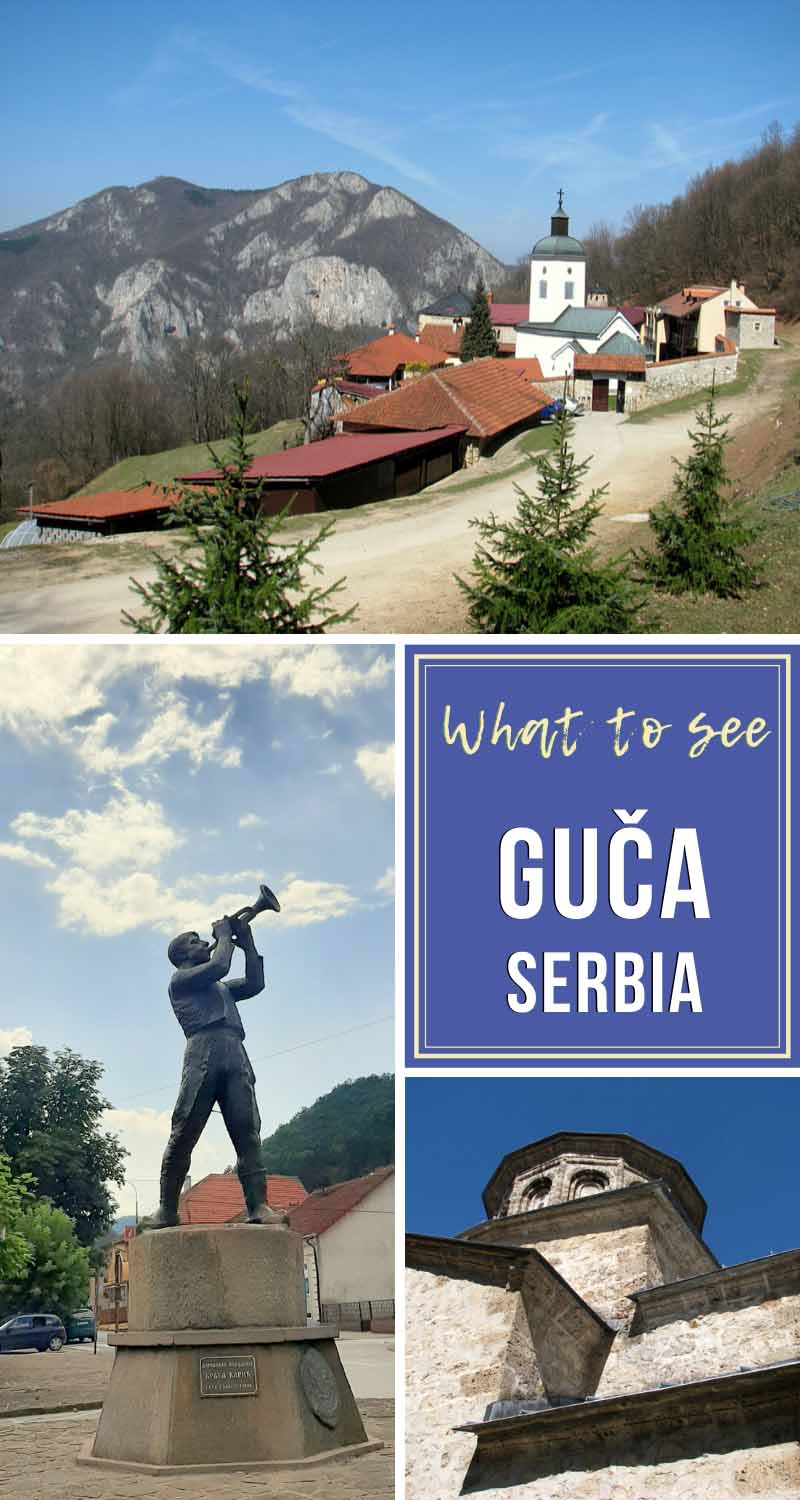 THINGS TO DO IN ZLATIBOR SERBIA

THINGS TO DO IN PRIJEPOLJE SERBIA

14 comments on “THINGS TO DO IN GUCA SERBIA”

They say that you will come back to Sremski Karlov