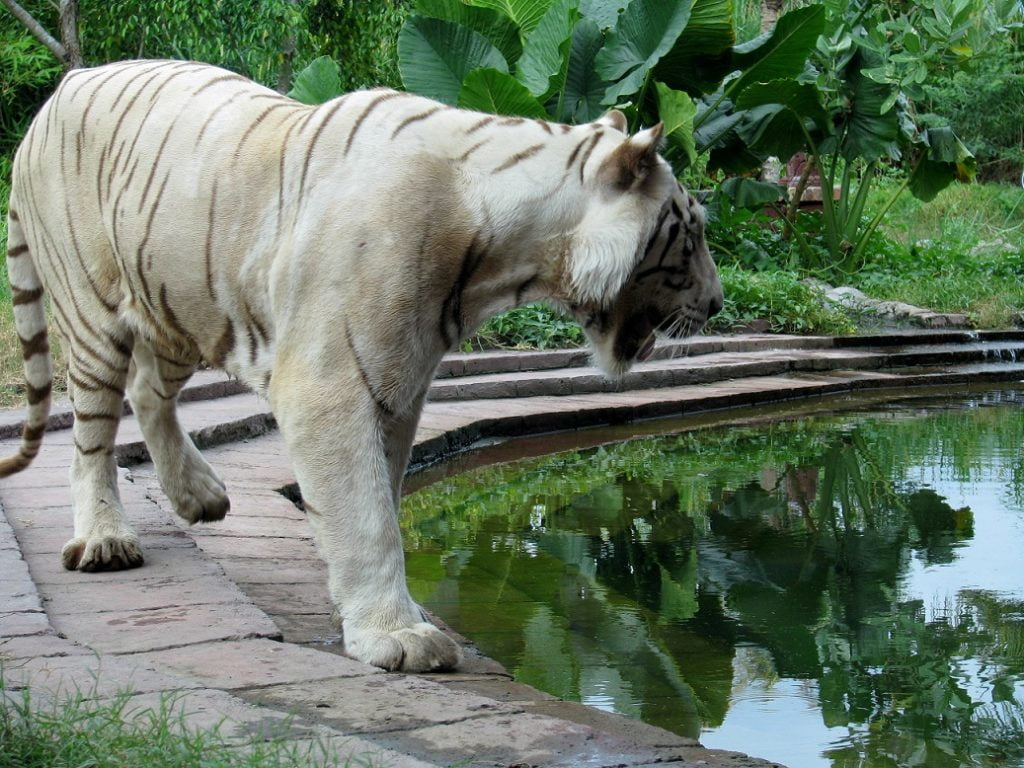 I can’t finish this series without dedicating one post to animals. All of you probably know stories about monkeys at the Monkey Forest or the Uluwatu Temple complex where they often take sunglasses or cameras from visitors. I have told you already that you should buy fruit before taking a walk towards the actual temple. Monkeys are believed to be guarding this holy complex, so they are not to be disturbed. You will come across them sitting on the fortified walls, peacefully, like waiting to be given some treat. 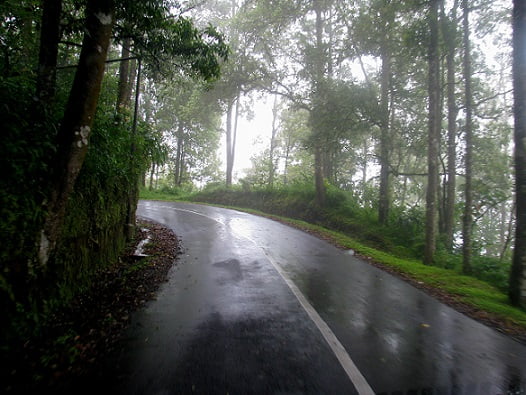 Driving inland on a foggy day

Monkeys on the road

One would have the similar experience if going to the Monkey Forest. But have in mind that monkeys actually live among the lush rain-forest trees that Bali has in abundance. While going around the island, we were driving inland, climbing the roads up the misty hills. The road was curving up with a dense forest on both sides. At times it almost seemed like plunging into one of those white thick clouds. We drove in and by the time it got us worried, the cloud was clearing before us. 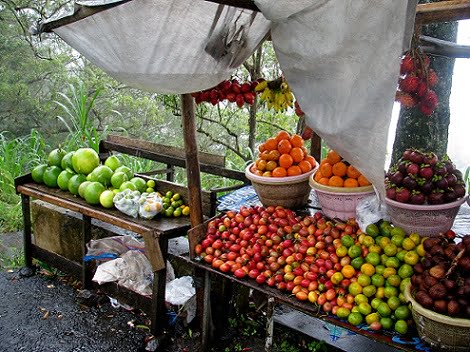 Fruit stall next to the rain-forest

As we approached another curve, there was a small stall. In the middle of nowhere, it seemed! There was nothing around, at least nothing was to be discerned because of the forest and the fog. Still, the stall was full of small fruit. The guide asked if I would like to feed small monkeys. Those were not the ones circling the famous landmarks, but the ones who came out of the forest knowing that there would be a stall with food someone just might hand out to them. 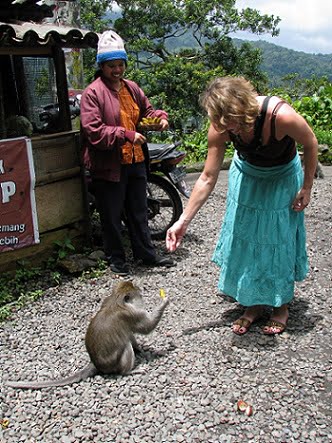 We stopped, I bought some fruit and there were small monkeys all around me immediately, being cautious and scared at first. But it didn’t take long before they came out more freely, ready to grab anything remotely eatable. They snatched the fruit with such speed that we were hardly able to take any decent photos. But this was one great experience and so much fun, especially for someone coming from Central Europe where the only animals one might encounter on the road are merely dogs or squirrels. And they don’t live in the – rain-forest! 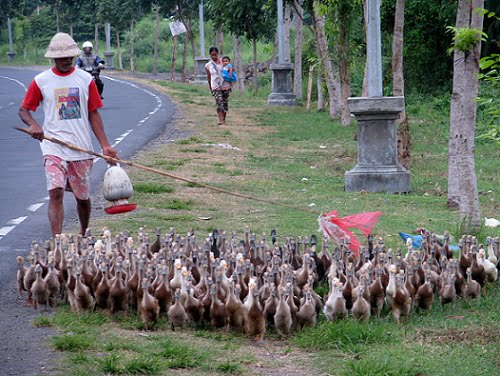 Small ducks by the road…

Even though I have visited the Singapore zoo before arriving to Bali, I was too curious to skip the local one. I just had to see what’s there. Even more so when the guide told me that we can take the ride through the zoo in a small glassed bus, driving through the terrains occupied by various animals. So, there were no cages? I just had to see that. And now when I think of the Balinese zoo, the first thing that comes to my mind is one huge ostrich running like crazy – chasing our cart! What a site to see and a story to tell, right! 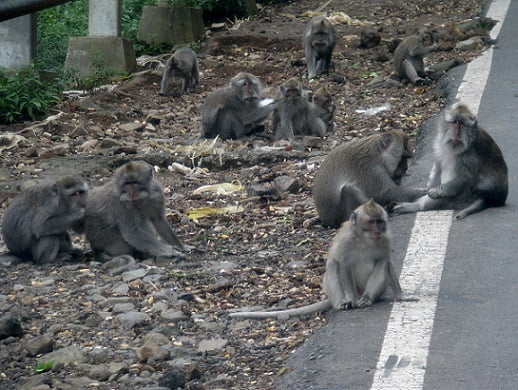 …But small monkeys as well

Anyway, this really was a good idea. If you are traveling with children, this would be the right choice for you. It takes less than an hour for the small glassy bus to finish its route, but you will also be able to visit the white tigers section and even to cuddle one. Such a huge animal with such a soft fur! The one I approached was sleepy, resting, and I tried to be as quite as possible. Who could even imagine that this animal can be dangerous and even deadly when it was so cuddly, purring like a kitten. 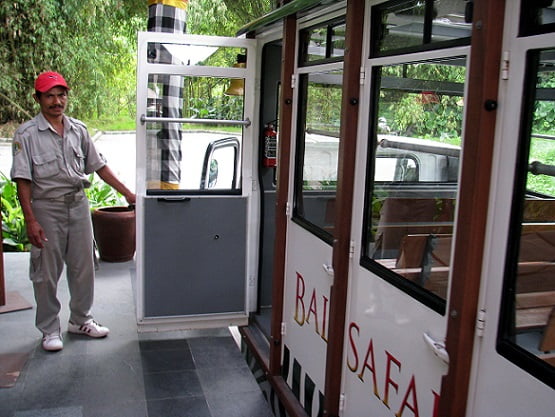 And so, our small bus took off, up the hills and down through ponds where hippos were resting. The lovely part was that you could actually take a glance at them through the window, even though they were inside the pond. The vehicle slowed down when we passed the herd of buffaloes or wild goats. And then, there it was! The ostrich was running behind our small bus. It went faster and faster. By the time our driver speeded up the bus, it was seriously chasing us. 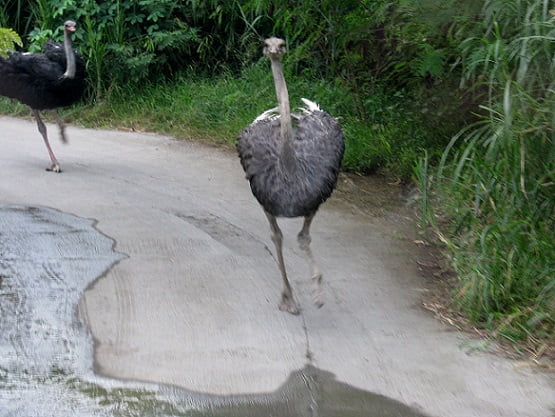 A protective parent – an ostrich at the zoo

“Don’t worry, its eggs just hatched and, like any other good parent, it has to protect its offspring, right!”, our driver said.

Oh my, I was chased by an ostrich, wait till I get home and tell the story! 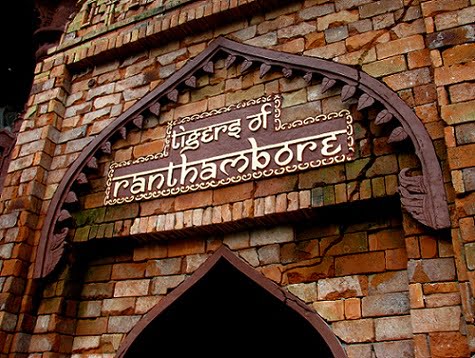 Special building for the tigers

This was also the place where I took the elephant ride for the first time. It was funny, because it was turning away from the path all the time, trying to eat the greenery by the pathway. 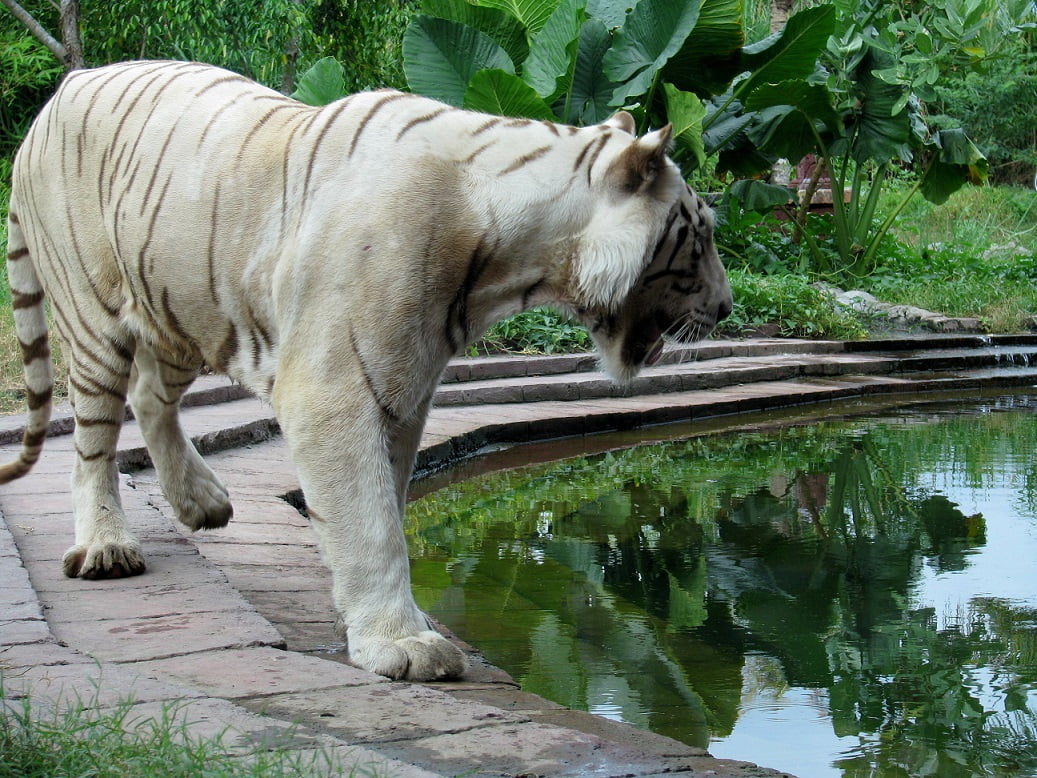 “Oh, she’s just a teenager, a spirited girl, hope you don’t mind. She takes some grass to eat and comes back, sometimes I think that she does that just to defy me”, the guy who took care of the elephant said. I found it so cute, since he wasn’t trying to force her but rather, it was like they had an everyday “family fight”. 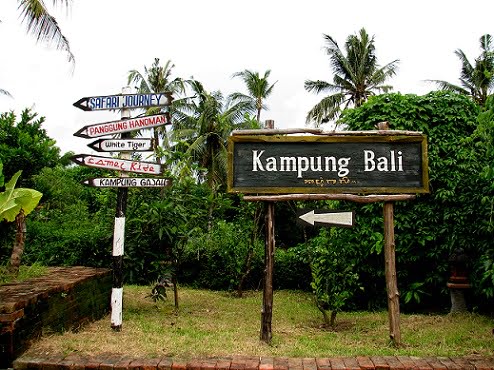 Directions at the Bali zoo

And one more thing I did here for the first time when it comes to fauna! It was during our visit to the Tanah Lot Temple. While strolling around after I took the blessing from the priest at the shrine, and while admiring the lavish vegetation all around, I saw – a python?! A real, big, scary python! There was a guy next to it offering tourists to hold the python for a while and take pictures. 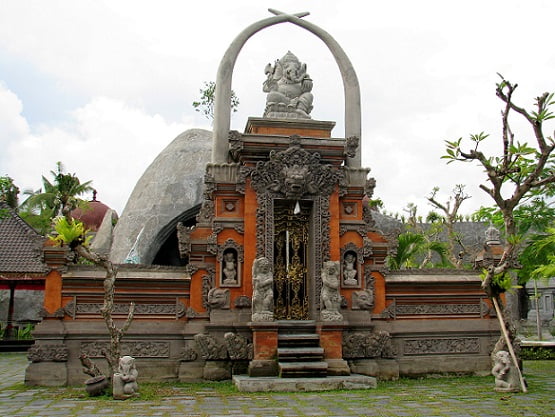 I have actually never thought of pythons or snakes of any kind, neither was I thinking about holding one, ever! But when I saw this, it made me wonder. I know, I know, so touristy of me! But hey, the only time I saw the actual python is at the zoo, through the glass window. And people were taking this snake into their own hands here! 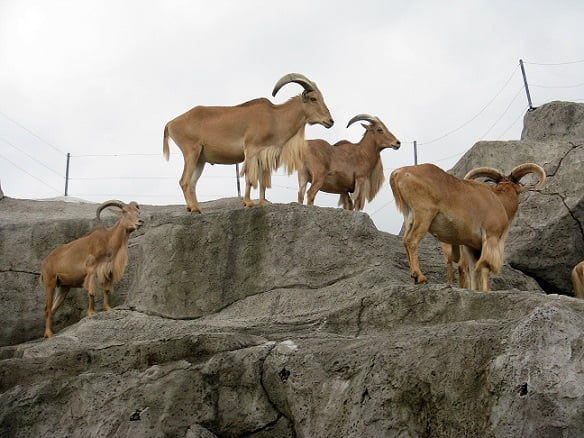 Goats on the cliff

My guide was speaking to the guy and tried to reassure me, “not to worry”, “it won’t take more than five minutes”, “he’s going to take the quick photo” and that would be it. Well, why not, this was the perfect opportunity to do something like this. It’s not like pythons are crawling in the streets of Belgrade, right! 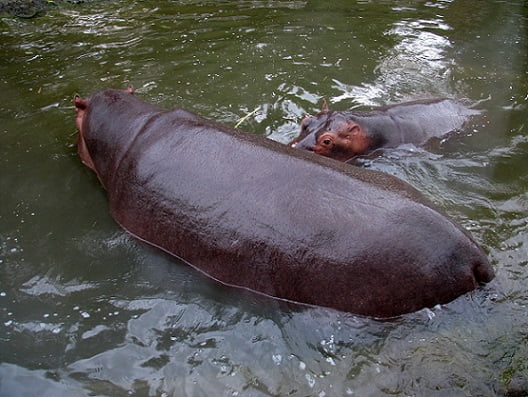 Hippos in the zoo pond

So, the guy helped me with putting the snake around my neck. It was heavy! They said about 50 kilos. I took its neck in one hand and the tail in the other. The guide took my camera, I tried to smile for the photo, but it seemed like it was taking a while.

“Hey, would you please hurry”, I said. 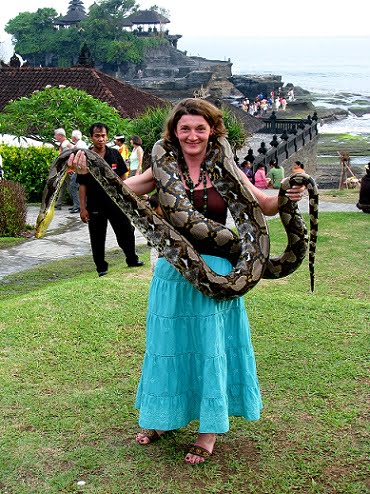 The 50-kilos python next to the Tanah Lot

He was smiling, saying that “the lighting was not perfect for the picture”. He took one, but then he said he would have to do it again because I didn’t smile… It went on and on for couple of minutes that seemed like 15 to me. And then the snake moved! Its body curled, all cold and heavy, it gave me the chills! My guide noticed how serious I got and started to laugh:

“Don’t worry, Danijela, it got its meal earlier, it’s not hungry!” 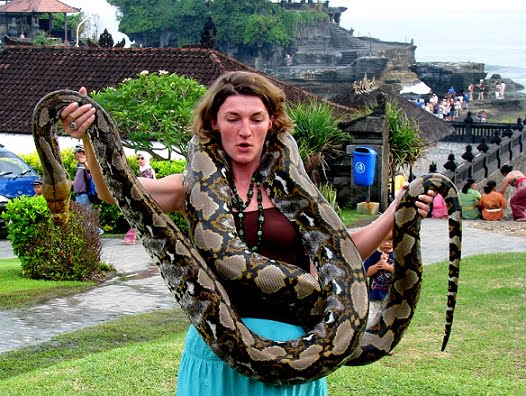 The snake was moving!

Oh, I started laughing myself! What a crazy experience! I was holding the huge snake around my neck, but luckily it wasn’t hungry. How surreal that sounds, right!

Just like my whole Balinese journey! Surreal and so memorable! 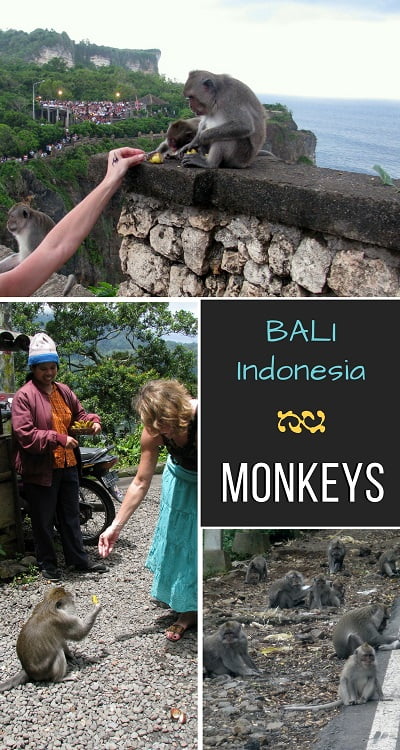