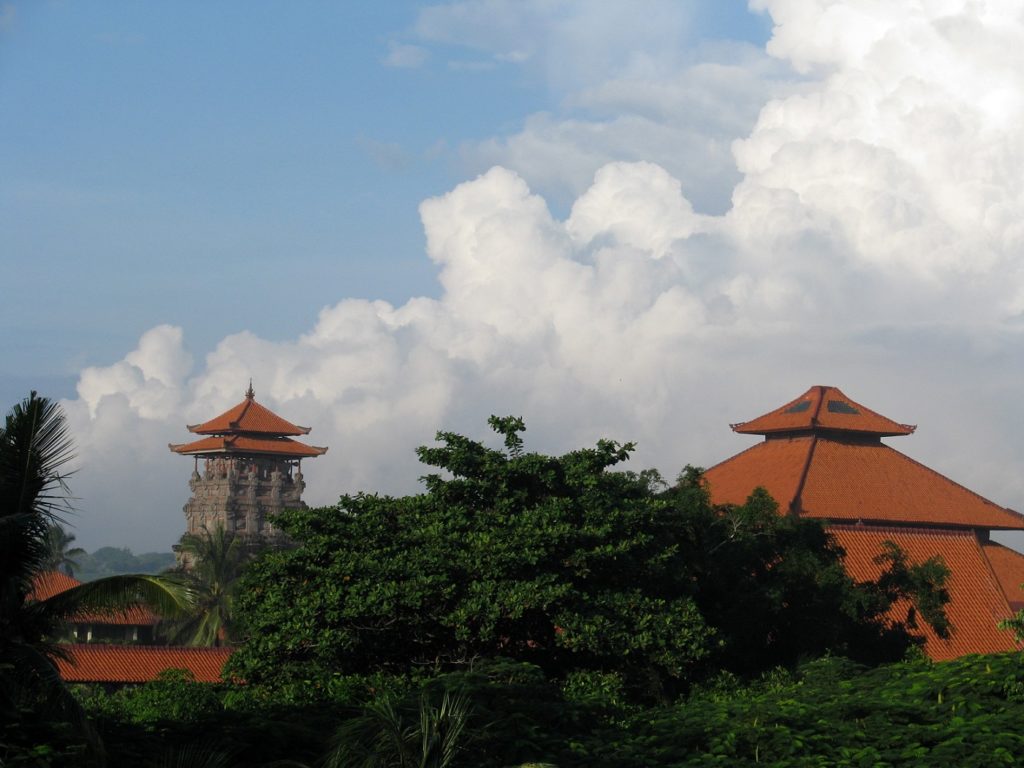 When I woke up that first morning in Bali, I didn’t know where I was exactly. The room was huge, there were birds singing outside in a manner that I have never heard before. I even looked up to see if maybe I have left the TV on the night before. Bright light was coming through the terrace door. Got up and opened it… Oh my! Where was all this last night! 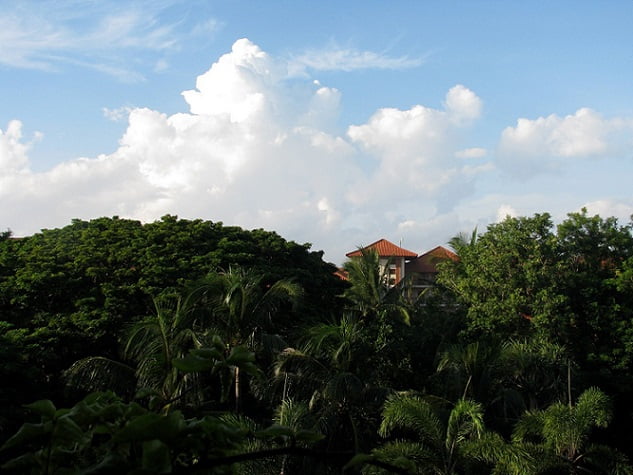 View to wake up to

There was such a wonderful view from the terrace onto the hotel courtyard that I just stood there, stunned by the scenery. It took me a while to breath in and out, to hear myself saying anything other than “oh my!”. There were paths through the lavish greenery curving in all directions and coming together a bit further away to go straight to the beach. I could even see the sea. And up there in the sky, huge, white, fluffy clouds were lingering. I didn’t know then that I would be fascinated by the clouds in Bali throughout my journey. Is it just me or the sky really looks so beautifully different when you go halfway around the world! Such lovely, sigh-worthy views! 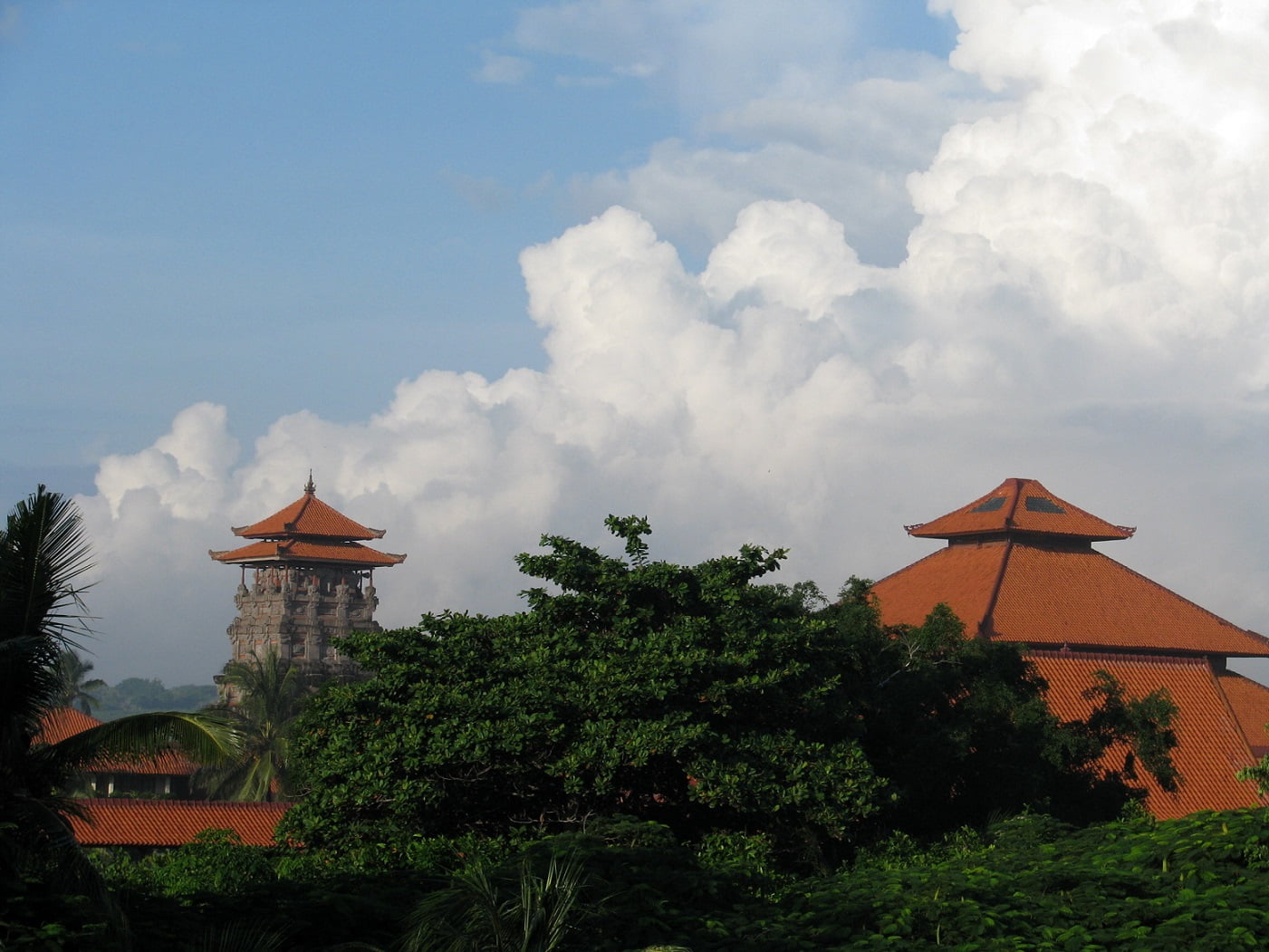 After coming to my senses, having breakfast and taking long strolls around the hotel complex and its various facilities, I had tea with the local guide who picked me up at the airport the previous night. I wasn’t really interested in all those touristy tours the local travel agency was offering, but it turned out that I could make arrangements with the guy to be my private guide. It meant that I can choose what I want to visit and when. 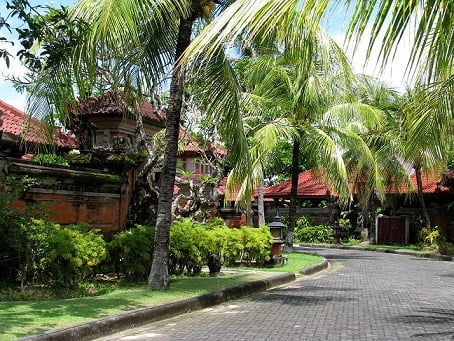 Lush greenery along the pathways

Given that I always come slightly prepared in a sense that I try to gather as much info about the place I am going to travel to (even books I bring to read are always in accordance to the destination), it took us maybe half an hour to agree upon our route for the upcoming 10 days. The guy is going to come and pick me up at the hotel almost every other morning and we will go around the island together. I would pay for the “tours” and would have to cover all the entry fees, lunch and coffee breaks, and wouldn’t have to worry about the car or the gas. This was going to be such a good idea! 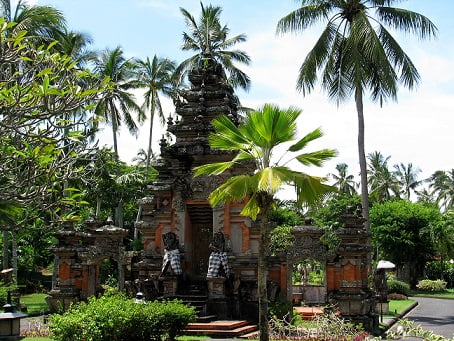 Traditional temples in the complex

It all just fell into place – I could visit everything I wanted, under my own terms, had enough time to do the tour around the whole island and the guy was great. Like almost all the people from Bali, he was smiling all the time, being kind and polite, he often spoke about his daughters and his young wife, their life there. It was fun to compare different circumstances we live in, totally different cultures, traditions and well – the weather. 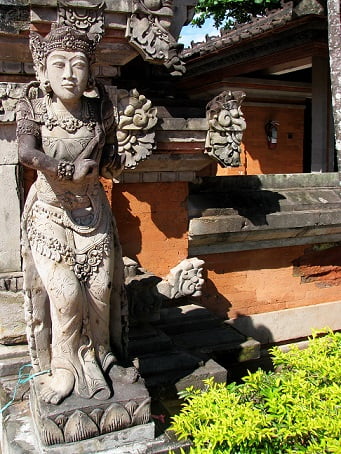 My trip to Bali was at the beginning of March. It was still hot and humid, at least according to the Balinese weather. I was amazed to learn that the temperatures here range from 22 to 32 degrees Celsius, all year round. The guide told me that people living on the island don’t have any heaters, they don’t need them since it doesn’t actually get cold, ever! 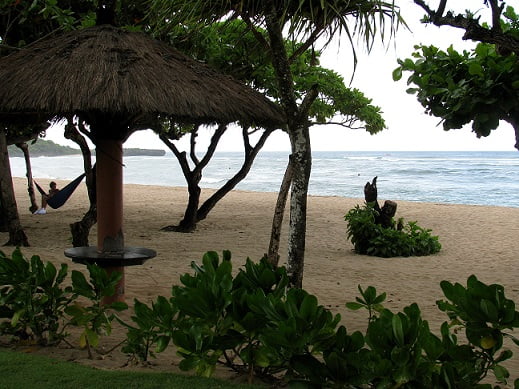 Walking out to the beach

While talking about the weather, he said that he has seen the snow only once – and it was in the ice chamber in Ubud mall years ago.

“It was possible to go inside, to step onto the snow, touch it. But, hum, I wasn’t that curious!” 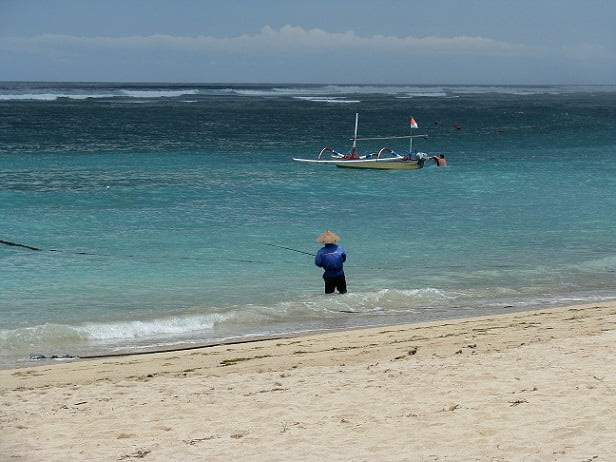 This was so amusing. He was laughing when seeing my reaction to “didn’t hold the snowball in my hands, ever” and then I laughed when his eyes opened widely when I said that in Central Europe we have all the four seasons.

“The temperature can reach 40 in the summer, but also 10 below zero in winter. I don’t think that we have ever had a winter without the snow!”

He just blinked again and said:

“Really? Oh my! You must have a lot of clothes then!” 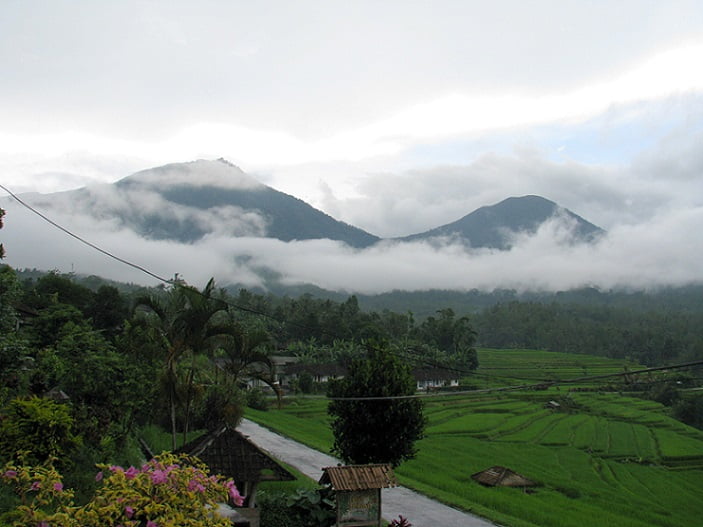 White clouds over the rice paddies

How interesting is that, right! Such glimpses of the world’s cultures are only possible when traveling and getting to know previously unfamiliar lands and people. These are the glimpses I have actually had in mind when thinking about the name for my blog. Such an emanation of diversity! 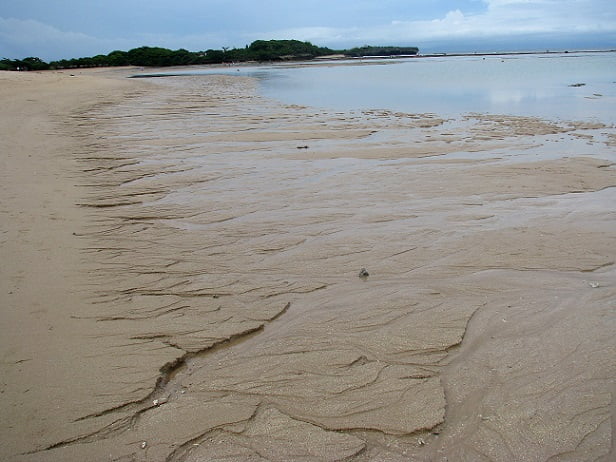 Still, however different the weather was in Bali, I actually found it perfect. It was usually around 28 degrees, sunny with occasional rains and beautiful large, white clouds. It could rain heavily, but it wouldn’t last for more than half an hour. The rain was warm and it was even pleasant to swim during such “a nasty weather”. The sea is warm all year round! 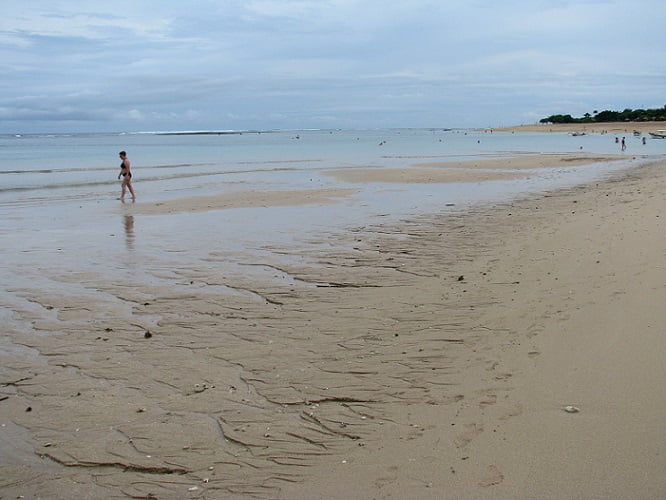 The wet season goes from November to March, it’s hot, humid, and it can change quickly from sunny to, well, stormy. January is the month with the heaviest rains. The dry season starts from April, while the driest months with pleasant temperatures are July and August. That is when most of the tourists come, it’s the peak of the season. Hence the reason for slightly higher prices in the summer. 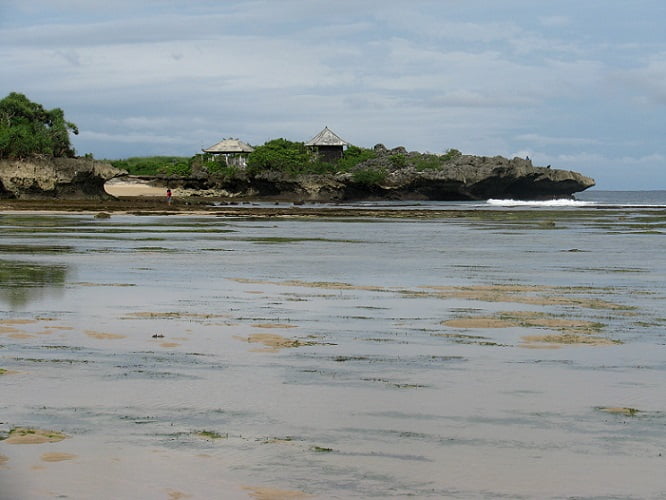 Interesting rocks emerging from the sea

Another thing I was taken by surprise was the tide. I didn’t expect the low tide to be so – low! I mean, the sea pulled back for about 100 meters from its original beach level every day. It was like you have to chase the sea in order to swim properly. 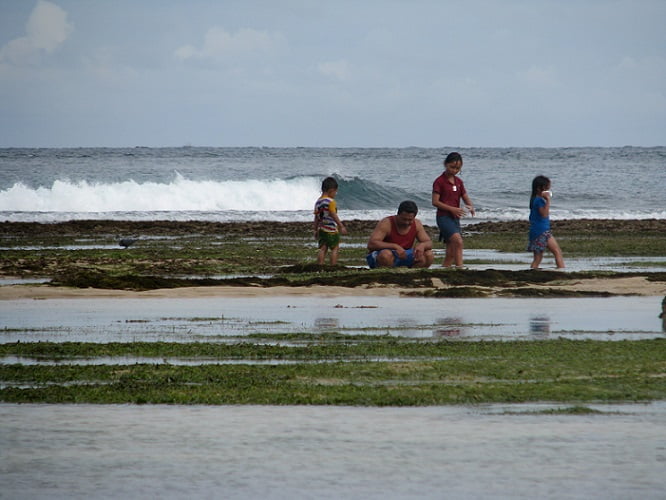 Playing in the shallow waters

One day, the sea took off away from the shore and I took my camera walking along this suddenly elongated beach. I went further away, found some beautiful shells and knelt down into the shallow waters so that I can take another photo up close. While I was trying to take that shot, something was pulling through underneath my knees, digging its way out of the sand. I felt it move and instinctively pulled back. I could even hear it scratching through the sand grains. And there it was – palm-sized crab that I have accidentally set on, with its beautiful green shell. While I smiled in awe saying “Oh, excuse me, my dear!” out loud, it dug itself back into the sand. 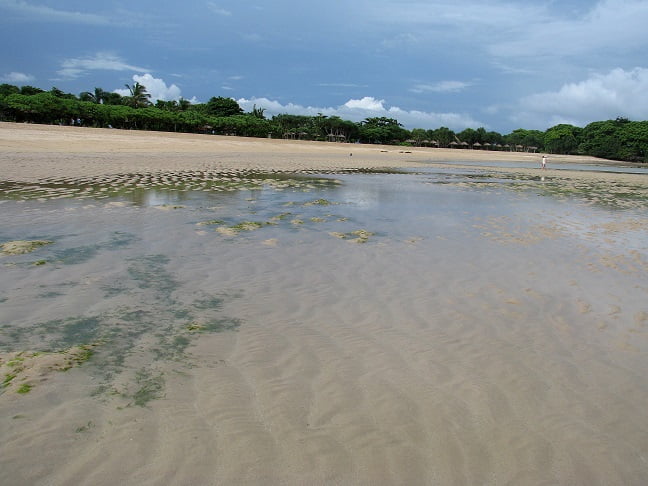 Few days later I was taken to the famous sea food restaurant which was touristy, but still a pity to skip. It was when I have decided to try the crab dish for the first time. It wasn’t that amusing to pick one out of the water tank they were held in, in order to cook and serve it for me, but I tried not to think about it. My guide was laughing seeing me with my eyes shut, pointing my finger to the tank randomly while saying “that one”.

“That’s not the same crab from the beach, you know!”, he said teasing me still. 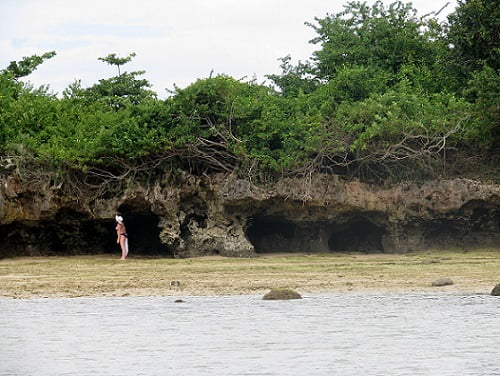 Anyway, we sat at one of the tables on the restaurant’s beach. There was a band playing all the popular old songs from the West, the restaurant was full, tourists all around. Arak cocktail was nice, never had one before. My crab was eventually served, it seemed it wasn’t that big, but I was satisfied. Tried to handle my meal while the guide was laughing occasionally, seeing me struggling with crab’s legs while actually admiring its colors and patterns on its shell. It took me a while to eat it, true. Halfway through, the guy has already eaten his fish and he was waiting for me to, well, eventually finish my dinner. After a while, he asked what the time was:

“Just asking. Hope you’ll finish before the high tide washes us all off!” 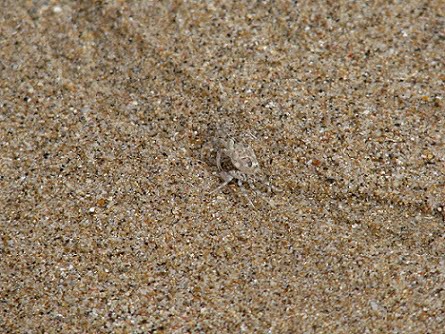 Can you see the crab in the middle?

How can one forget such funny situations! Whenever someone mentions a crab dish nowadays, I instantly remember how I ate my first one almost until the Balinese tide washed me away, along with the plate! And the guide. And the band. And the whole tank of all those other crabs with their pretty shells!

Next: THE MOTHER TEMPLE (3) 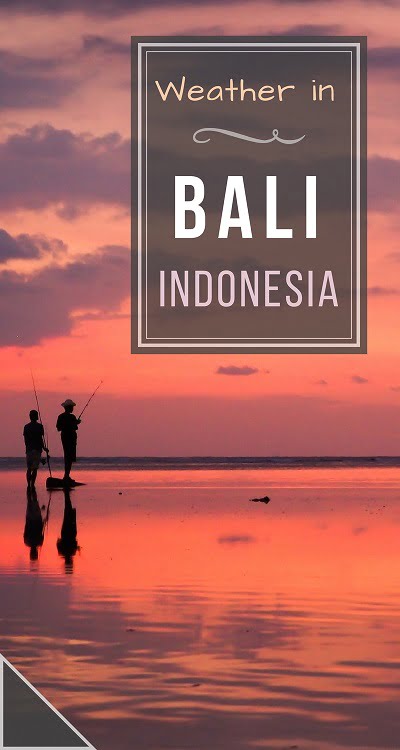