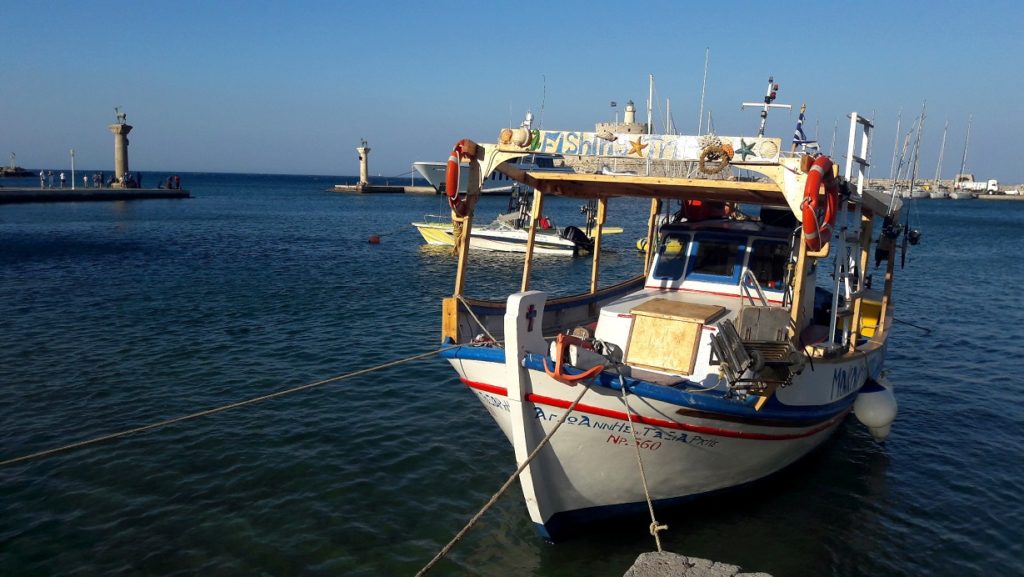 “Look, there, you see those two pillars with a deer and a roe deer on the top, on opposite sides of the harbor entrance? There, that is the spot where the famous Colossus of Rhodes stood, with his feet on opposite sides and boats sailing in through his legs”, our Odeon World Travel tour guide said. 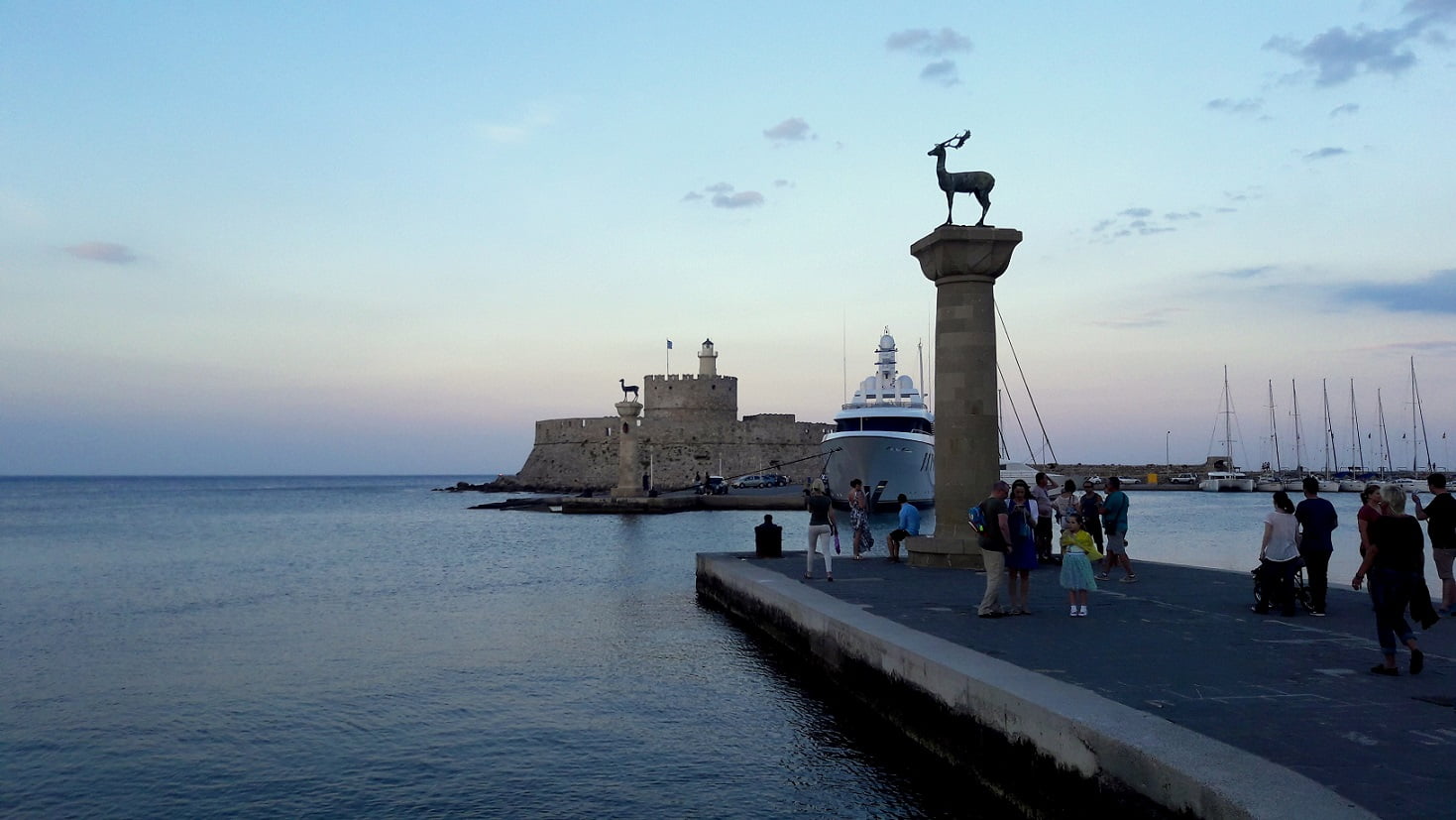 Deer and roe deer where Colossus once stood

Have looked up again. Just imagine, a colossal bronze statue 31 meters high! Dedicated to the Sun god, Helios. (He seems to be going after me everywhere I go here on the island! Just check out previous Glimpses of Rhodes and you’ll get the picture.) This was considered to be both technical and artistic masterpiece of the time. It’s been designed by Chares of Lindos, the Rhodes’ town where the famous art and sculpture workshop was.

There is a dispute today whether the Colossus stood here exactly or a bit up the shore, among the latter walls of the Old Town where the temple of Helios was once built. 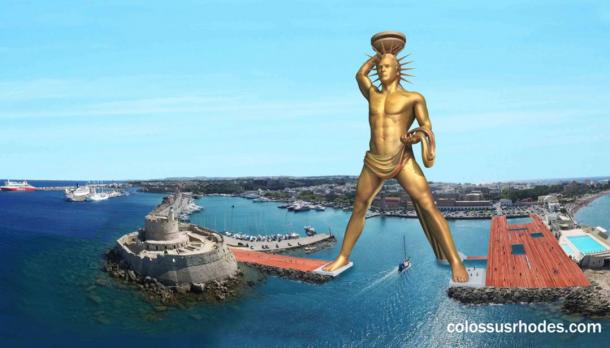 Ideas for Colossus’ reconstruction (illustration by Colossus of Rhodes Project)

Anyway, the bronze huge statue of the Sun god that was probably mesmerizing to see reflecting the sun light during daytime and that was easy to spot from the distance at night since it was holding a torch above its head, was erected to celebrate the victory against the king of Syria Antigonos and his son Dimitrios the Besieger in 305 BC. Antigonos was not pleased with Rhodes’ relations with Egypt’s Ptolemies he was planning to declare a war against and so, he has sent his son, famous for conquering all the cities he has put his eye on.

Still, after the year of trying and being ever so superior in numbers over Rhodes’ army, the famous Besieger has just given up taking off in shame and leaving all his weapons behind. 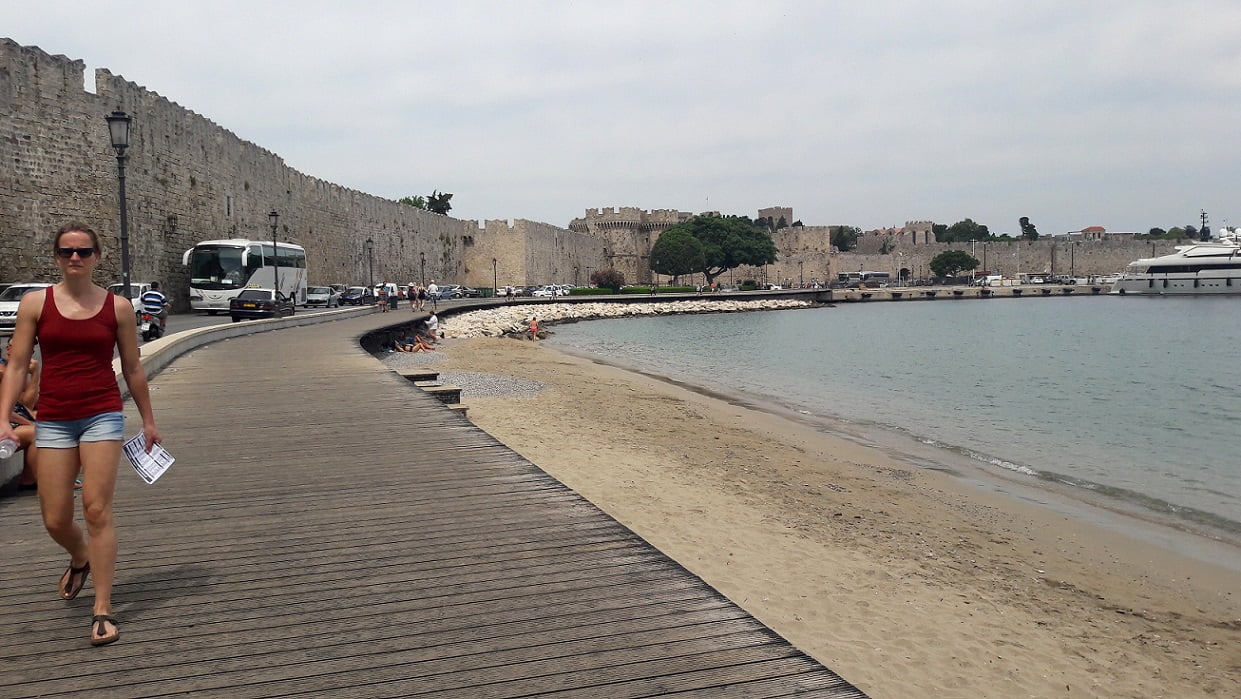 And what did Rhodians do? They have sold it all investing those funds in building one memorable statue of Helios as a symbol of their gratitude to the gods, being in favor of their victory. This was also the turning point for the island, since the new era had thus begun for Rhodes until its trade and maritime activities reached peaks that practically no island had ever achieved before.

How Colossus cracked at his knees

Unfortunately, the colossal statue stood only for 66 years. During a severe earthquake in 266 BC, the Colossus cracked at the knees and fell. 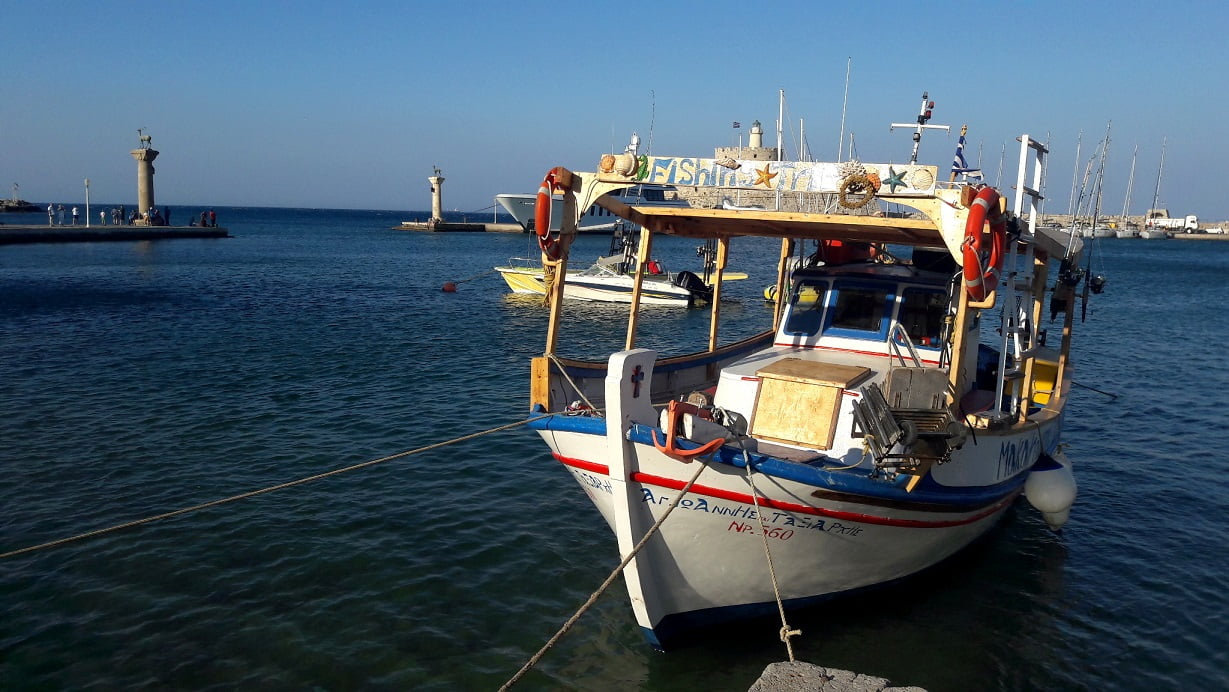 Deers’ pillars in the background of the boat

Fearing of gods’ curse, Rhodians did not re-erect it and it laid there in pieces for many centuries.

It wasn’t until 653 AD when Arabs came, that the Colossus of Rhodes ruins were sold to Jewish merchant. The story says that it took him 900 camels to transport the whole statue!

Rhodians were known as the Colossians among both Greek and Westerners for many centuries. That is how strong their link to this ancient wonder was. Today, pillars with deer and roe deer are put there to celebrate the deer species that can only be found here on the island. No one knows how they got here in the first place. 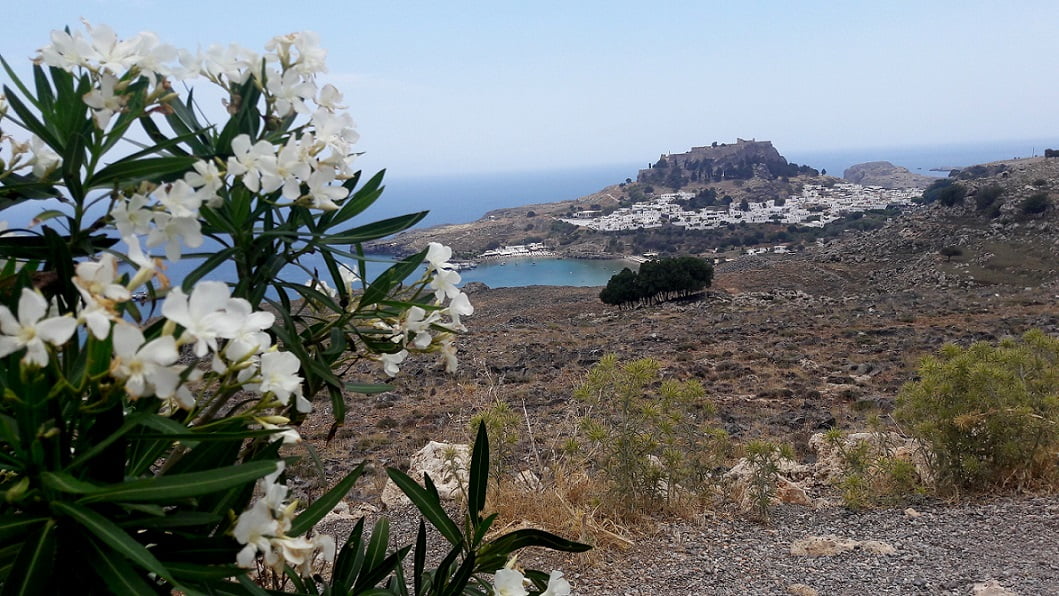 They say that another artist who learned the craft in Lindos, the same town Chares came from, is believed to be the author of yet another wonder of the ancient world – the Mausoelum in Halicarnassus (today’s Bodrum in Turkey). I was stunned! Imagine how important the island and its people were back then!

The very origins of the island, according to mythology, are so intriguing. Not only that the island was emerged by Zeus himself from the sea and given to Helios, the Sun god (see the first Glimpse for more!), but the first inhabitants here had magical powers. 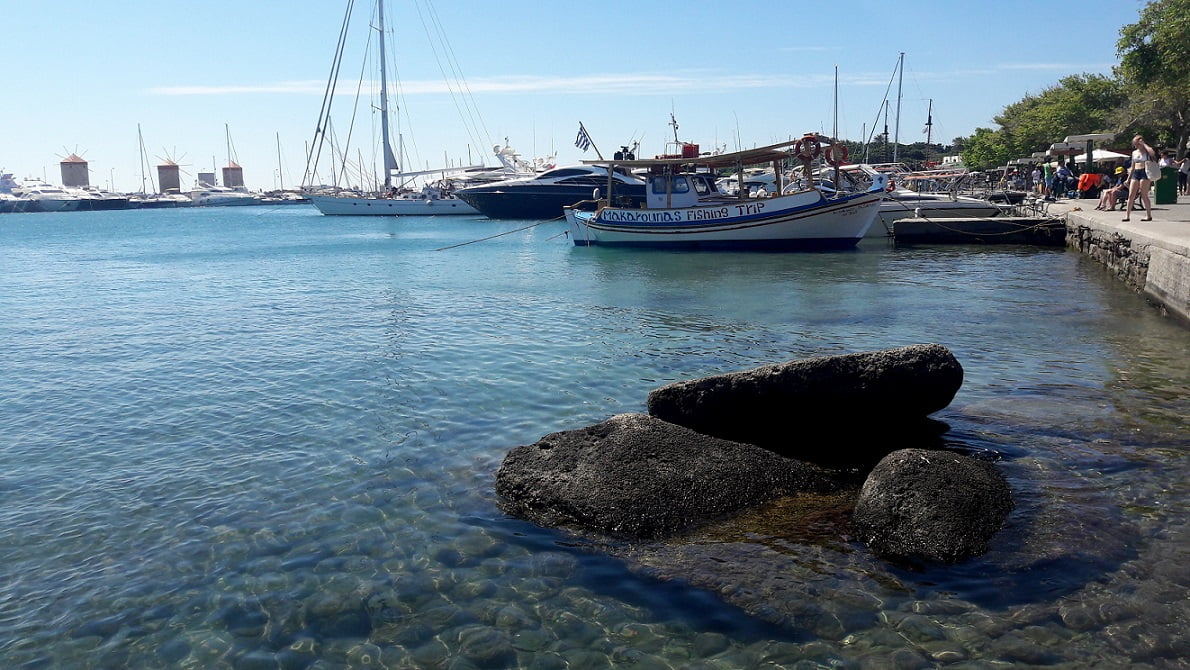 The myth says that they were gifted metal-workers and so, they have made the sickle-shaped sword for Chronos and the trident for Poseidon. Helios’ and nymph Rhodos’ children, the Heliads, drove them away from the island.

According to history, the first inhabitants came from Asia Minor, followed by the Phoenicians, then the Minoans from Crete and Achaeans. It was when Dorians came and overran the island, developed the town of Lindos, Ialyssos and Kameiros, that the island acquired great power and wealth. 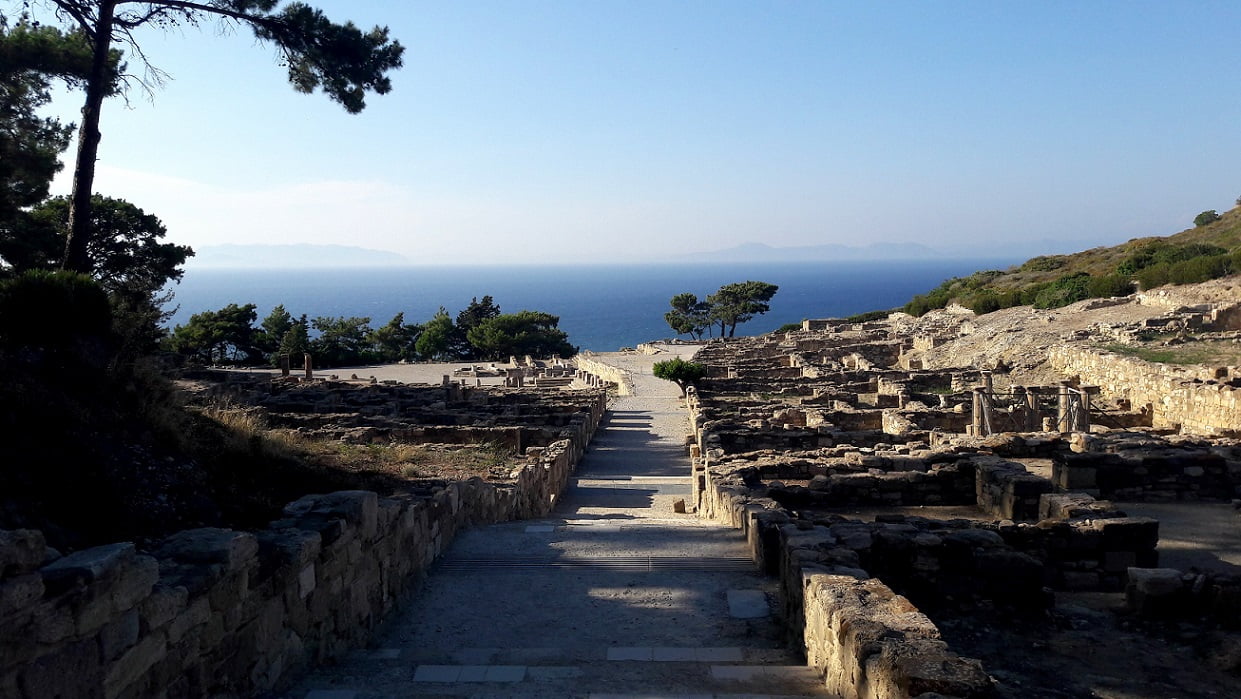 Beautiful scenery by the Kameiros ruins

Led by Tlepolemos, the son of Hercules, Rhodians took part in the Trojan War with nine ships. Also, from 1,000 to 600 BC the three towns, above all Lindos, founded many colonies on the shores of Asia Minor, Sicily, France and Spain. They were later joined with other Doric towns of Kos, Knidos and Helicarnassus to form the so called Doric Hexapolis. But, during the Peloponnesian War Dorians decided to join three towns and form another, on the northeastern tip of the island in 408 BC.

The town was given the name of Rhodes. 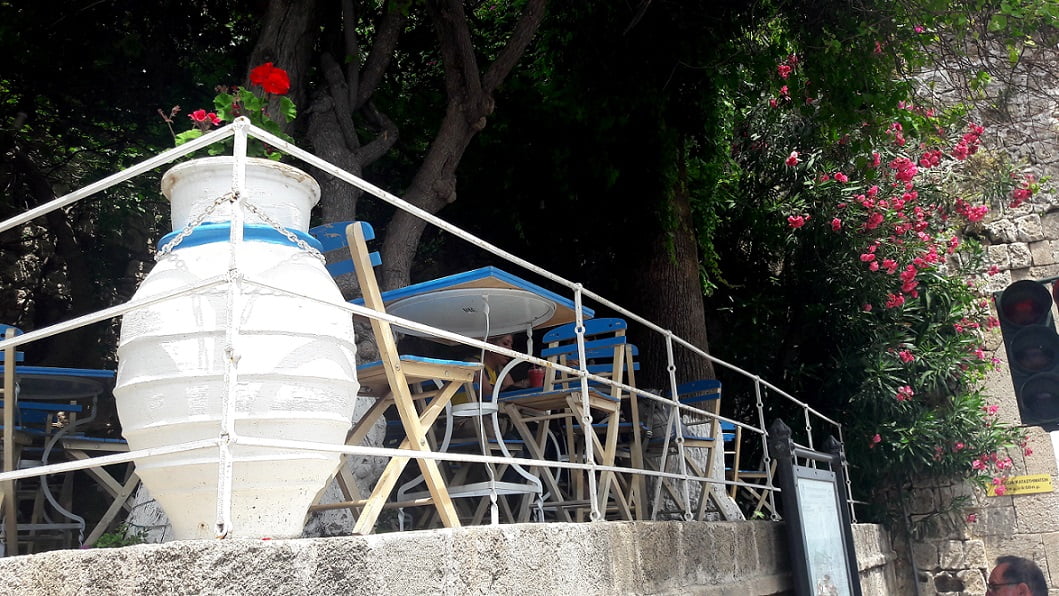 Typical Greek detail in the city

And there I was, traveling in the 21st century AD, trying to calculate how many centuries and years have passed since this town was established. I mean – people with magical powers that did the trident for Poseidon, the Sea god! Or nine ships lined up going towards Troy! Just imagine!

My mobile phone rang… The sound so out of this world. The world I was in at the moment. I have turned it off, didn’t want to disturb the energy of the place, with Colossus looking from above, Phoenicians who introduced the first alphabet here, ships going off to Troy, Dorians setting off their plan for the new city… 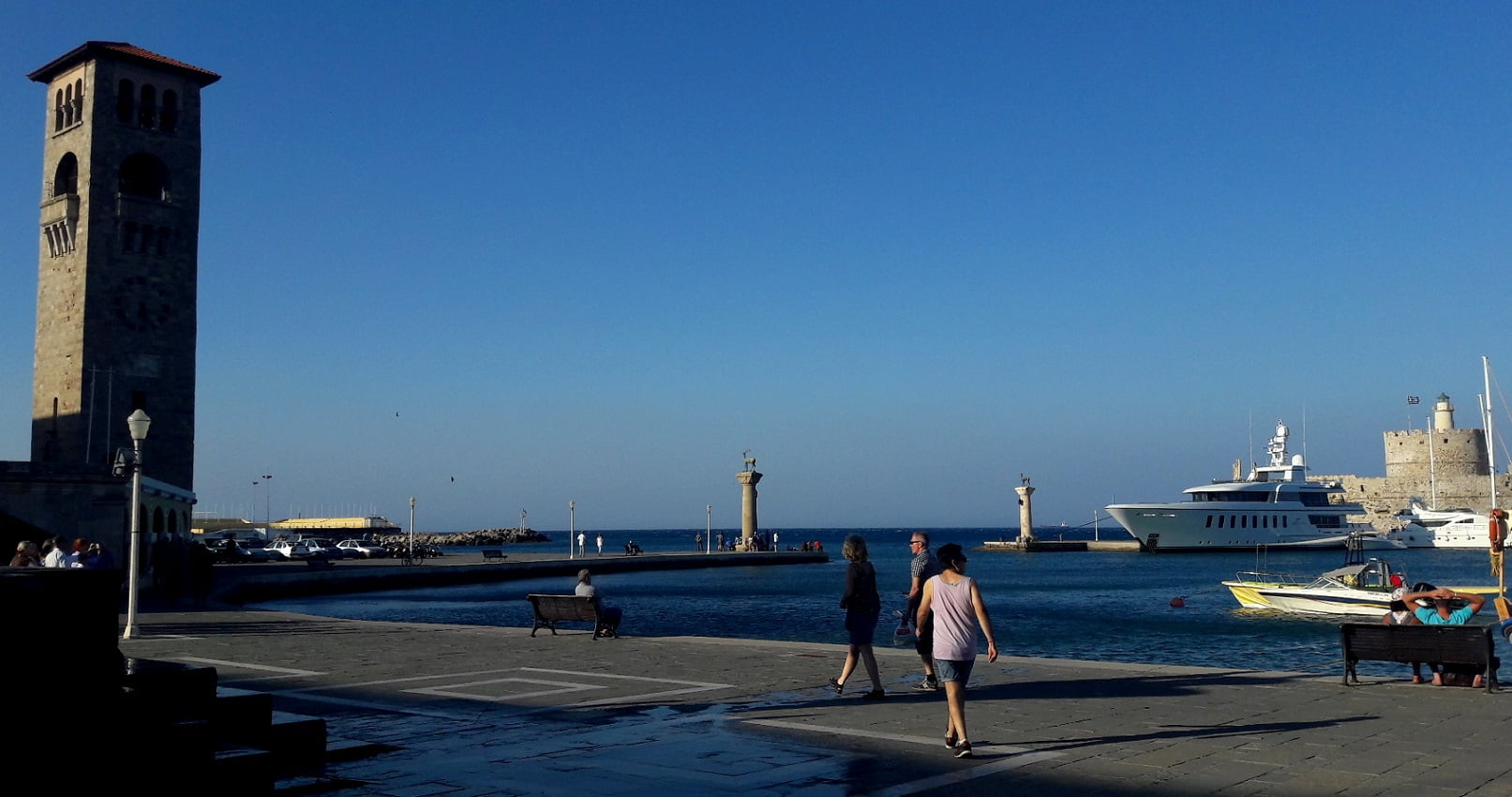 Strolling along the harbor

How can one react to such a history, and it all happened more then 2,000 years ago. I didn’t even get to begin reading about the “more recent” events during the Christian era. Just stood there in awe, my jaw was dropping!

“If you look towards the line where the sun sets, right from this place at the Rhodes’ harbor, be aware that that is where the 4th-century Christian saint and Greek Bishop of Myra, in Asia Minor, was born. You all know him by the name of Saint Nicholas”, our guide said.

Oh! Turned my head in awe one more time!

21 comments on “Rhodes Greece: THERE STOOD THE COLOSSUS! (3)”