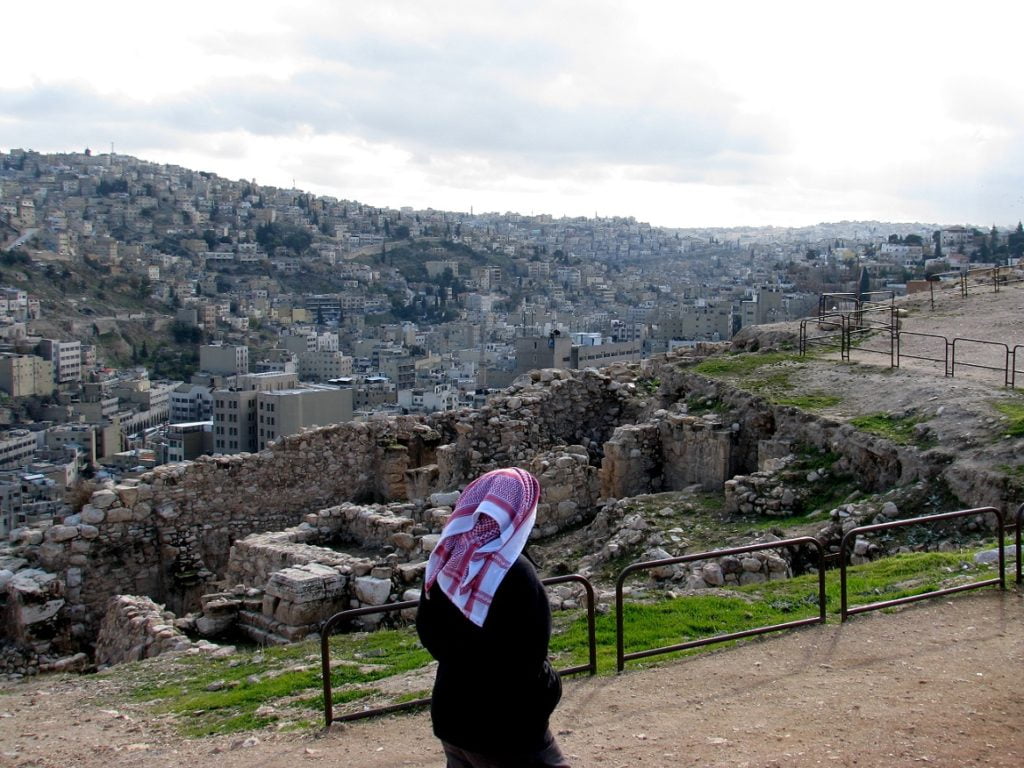 When traveling to Jordan, one of the stops to do is certainly the capital Amman, probably different from what you might expect. This is one modern city with the usual traffic jams (Arabic style!), cozy hotels, nice walkways, shopping malls with everything from Starbucks to Prada. The country is populated by Arab Muslims and it is considered to be a bit wealthier than most in the region, but still not nearly as rich as the Gulf monarchies. Never the less, the situation changes as soon as you move away from Amman when the country gets to look dry and empty, and its population pretty poor. 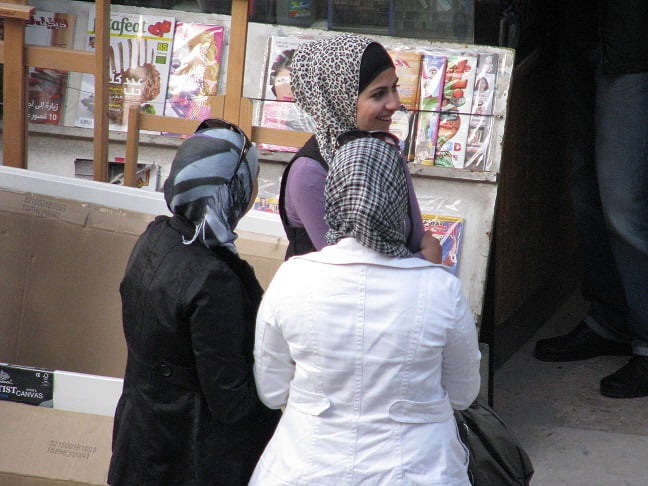 On the site of the Biblical Rabbath Ammon, mentioned in Genesis, there was a town that king David conquered in the 11th century while it got its independence back under the rule of Solomon. The city flourished under the Romans. 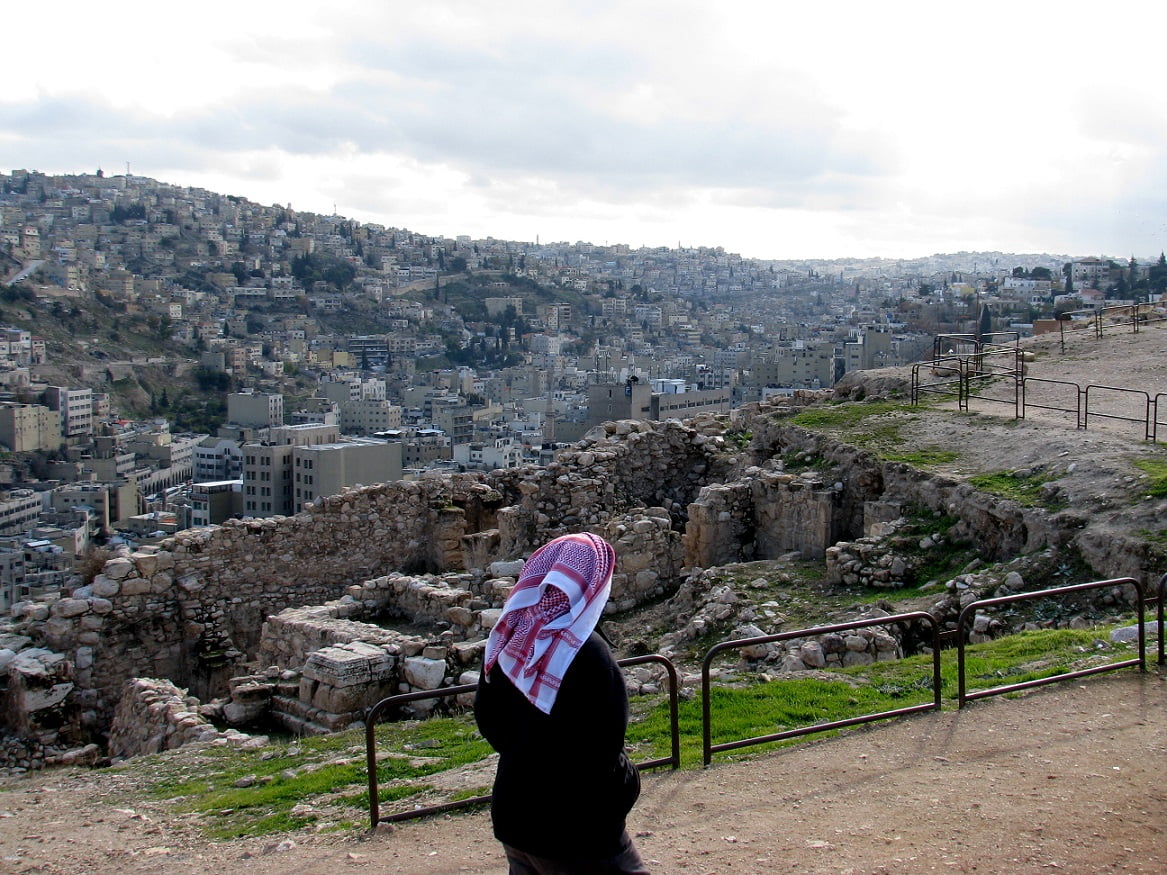 View from the Citadel

During the Roman times, Amman was the regional center of the Roman Philadelphia area. It was especially interesting then because it stretched on the 7 hills, just like the city of Rome did! 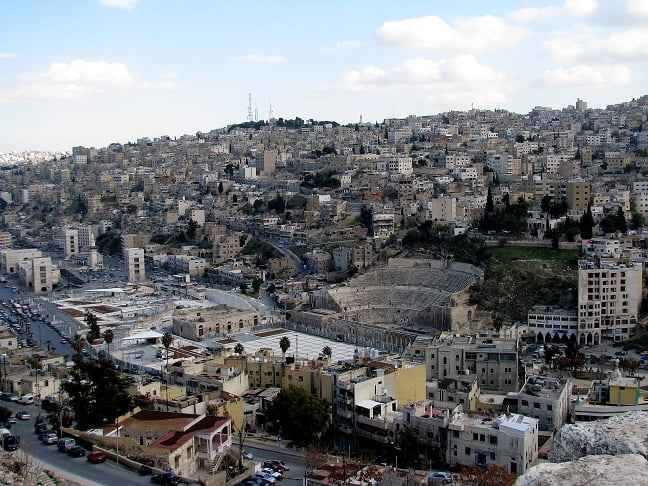 Remains of the Roman theater

Thus, a must-see is certainly the Roman Forum and the Theater that date back to the 2nd century AD and was able to host more than 6,000 spectators. This area is still the heart of the capital. Parts of the ruins have been rebuilt and they are now often used for various cultural events. If you are into views, you will find one great view of the Theater from the hill above where the famous Citadel is. 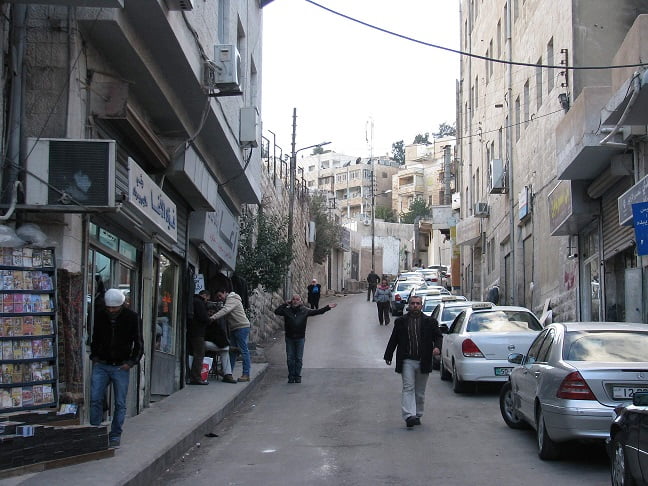 Up the steep street towards the hill

So, take a taxi – the route is a bit long and very steep – and climb up the road to the top of the hill. The best panoramic views of Amman are to photographed from here, and from the hill of the Abu Darwish Mosque. 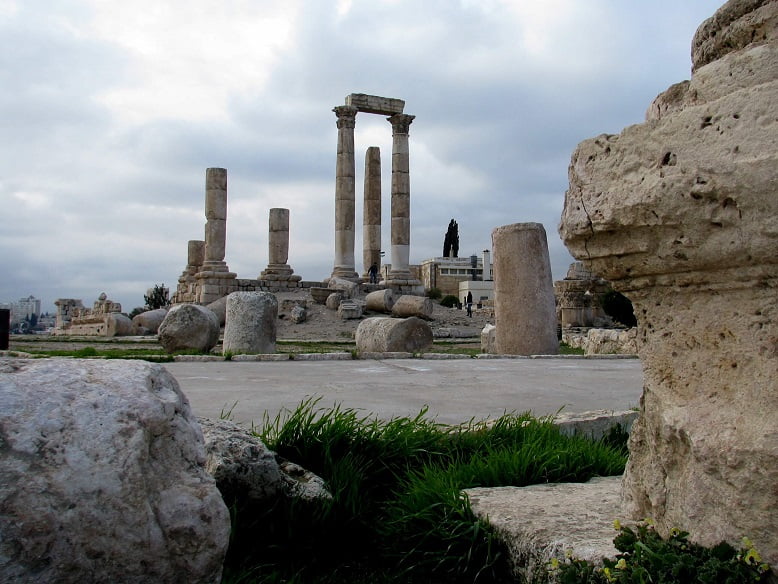 Columns of the Hercules Temple

This is where the acropolis of the ancient city stood. Today, you can stroll among the various Roman ruins. One of them represents the remains of the 2nd century Temple of Hercules. It was erected in honor of the Emperor Marcus Aurelius on a high terrace, once connected to the city below via – a monumental flight of stairs of which no trace remains. The sacred building had four Corinthian columns on the facade, two of which are still standing. 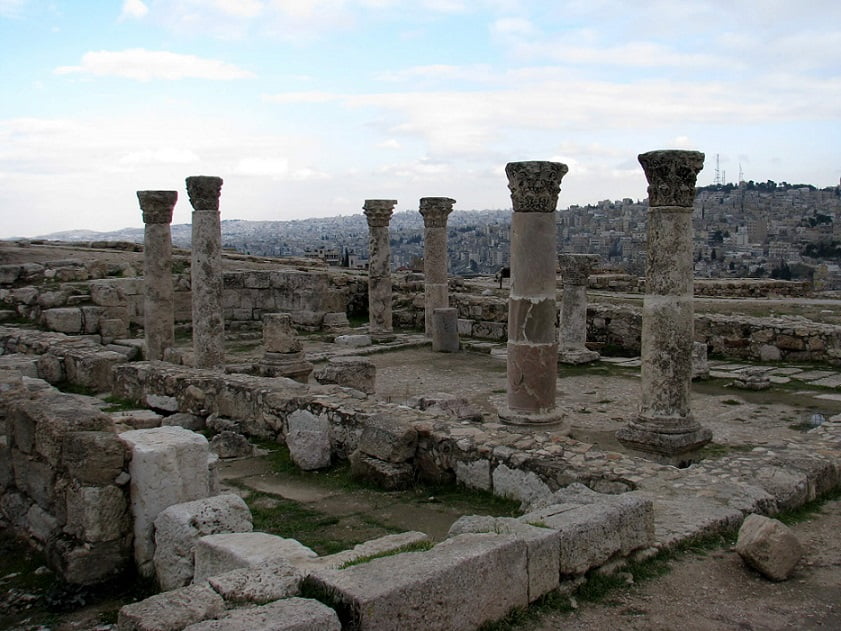 Next to the Temple ruins, you will see the remains of the 6th century Byzantine church, but also the early medieval complex from the beginning of the Arab rule such as the Al Qasr. Erected probably in the mid 8th century, in the final decades of Umayyad dynasty rule, the complex served as the urban residence of the governor and as the administrative center. Particularly interesting is the so-called Audience Hall with spacious rooms and rich in reliefs. 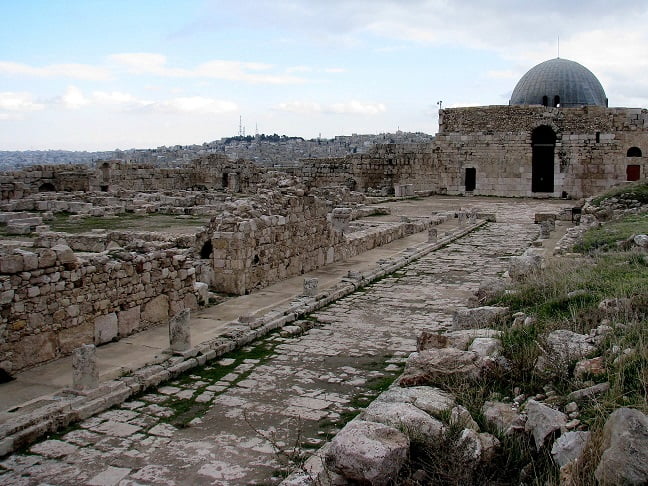 In front of the Archaeological Museum of Jordan which is also located on the hill, you will see the remains of the colossal statue, a hand like coming out of the earth. The museum houses finds ranging in date from the earliest Neolithic period to the Ottoman empire. 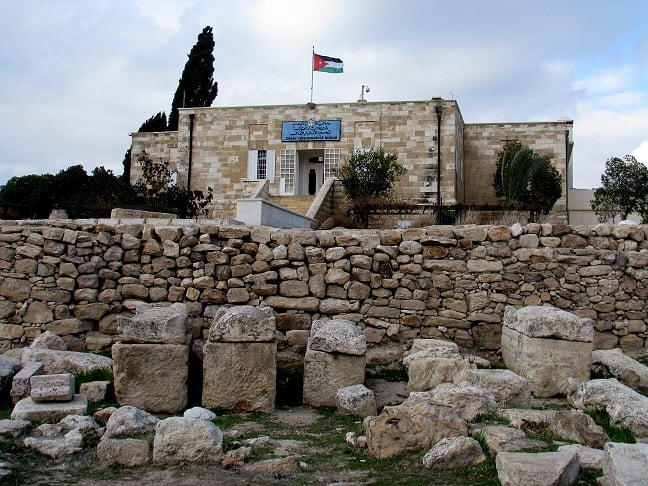 This would be a nice spot to mention few interesting details. The day I went to see the Citadel and the Abu Darwish Mosque, I ended up with my own personal taxi driver. It so happened that even though I wanted to go by myself (the way I have visited so many countries in the world thus far), to take few photos, visit the Museum, take a walk and have a lunch in Downtown Amman – my Jordan friends had a different idea! Not that they didn’t advise me to go solo, but they didn’t actually want to hear anything about it. So, I ended up with a taxi driver who was given instructions to take me where ever I want, „not to leave me out of his sight“ the whole day and to take me back to the apartment safely. 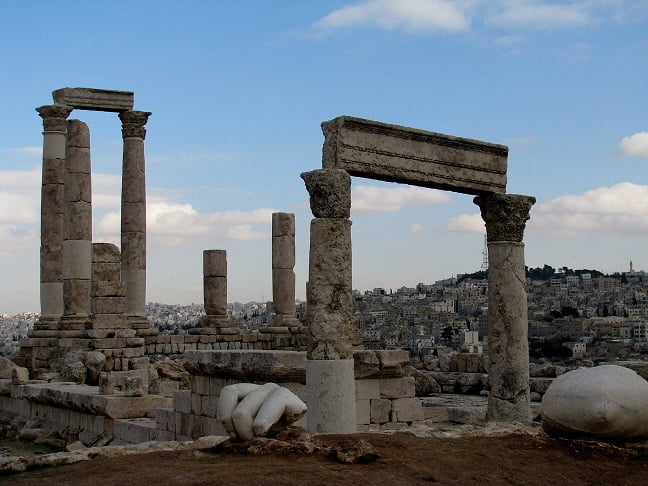 Before I even took them seriously, everything was already arranged! I was only supposed to text the guy the next morning to confirm that „I will be down at 9am“. 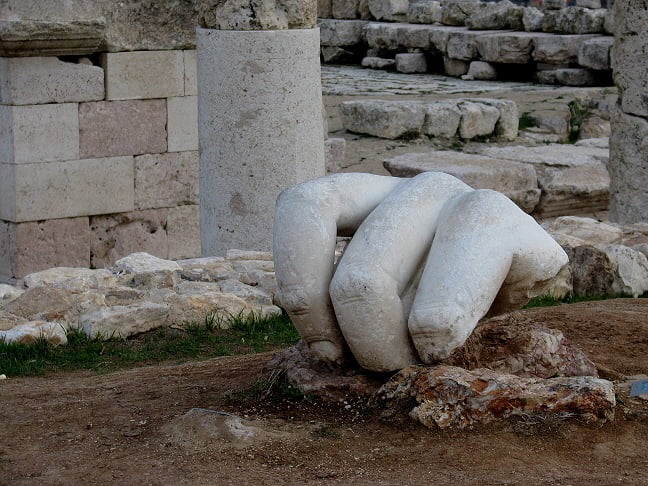 The man was nice, having fun with my clumsy Arabic sentences (I was just beginning to learn the language), and he was pretty serious regarding his „assignment“. When ever I would say that „there’s really no need to wait“, that „I can walk for the rest of these 100 meters“, he just shook his head repeating: „No, no, no, Miss, please be so kind and step into the vehicle, what am I to say if something happens… No, no, Miss, please.“ 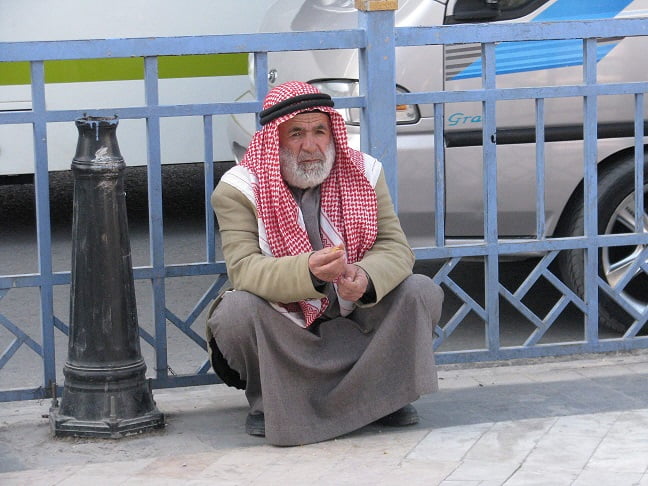 People in the Old Town

The whole day was fun! We drove to the Citadel and then back to the Downtown Amman. I should probably mention regarding the driver’s precaution that Amman is actually quite safe. If you respect the country you have come to and the rules that occur there (as you should regardless to the place), there won’t be any unpleasant situations, of course. 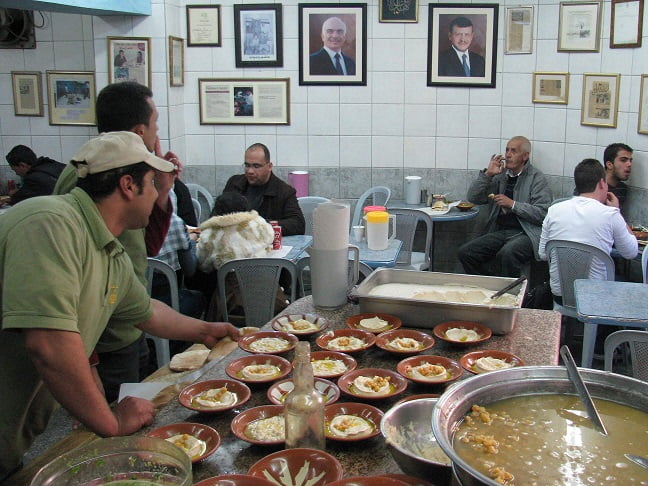 ‘Hummus’ bowls on the counter

Take a walk through the Downtown area, peak into the colorful stands, choose where you would like to sit for a coffee (alcohol is only served in a few special places and it is sold in a particular liquor stores), there are restaurants at every corner. If you like Greek, Turkish or Serbian coffee, you will also like the Arabic version, even though they add cardamon to it (a detail easy to get used to). Everybody drinks Coke and smokes sheesha pipes. 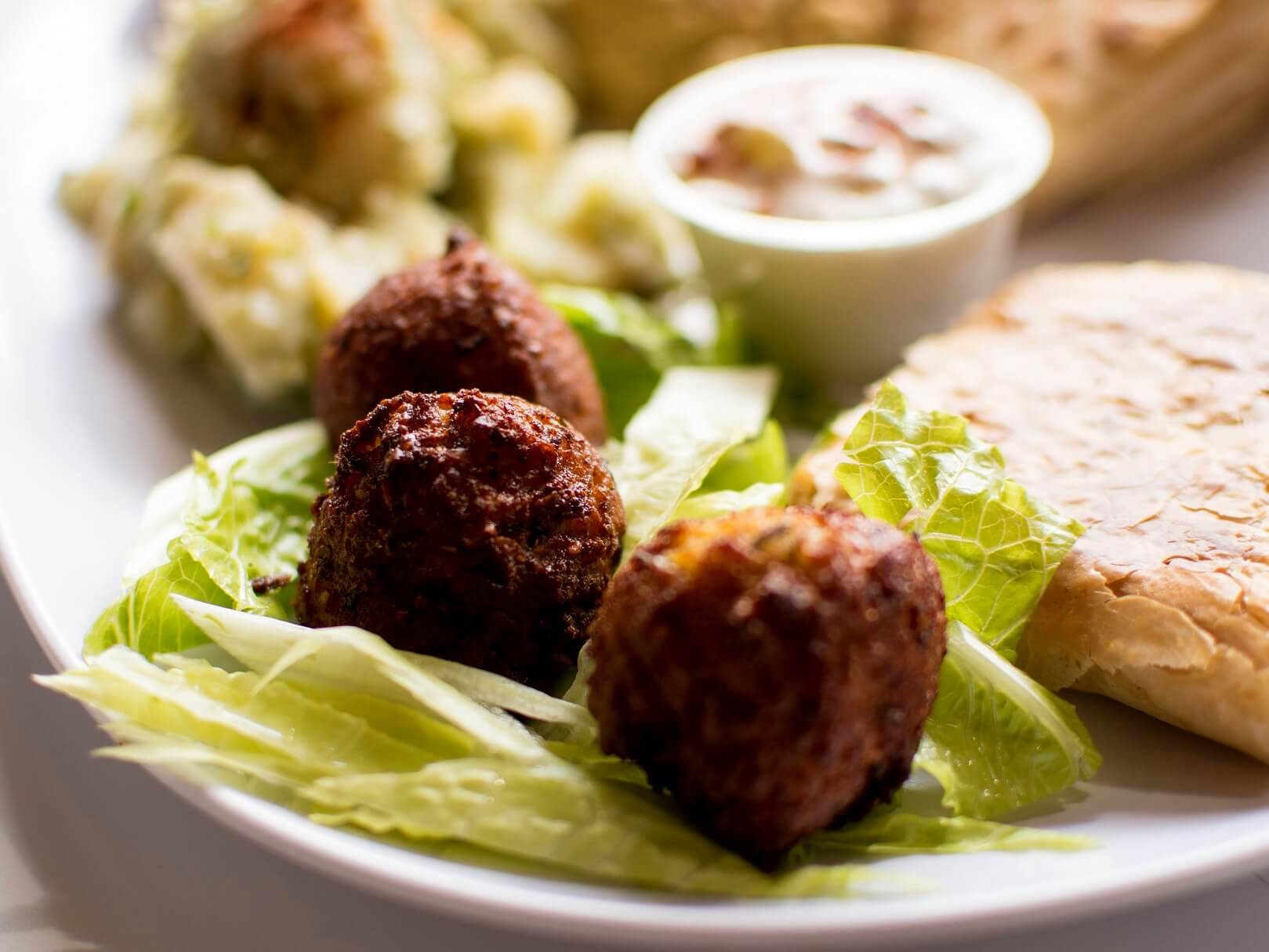 Once here, make sure to try the famous falafel and hummus! There is a small restaurant in the Old Amman, seemingly not that alluring, but with one of the greatest falafels you will taste in Jordan. They say that „even the king drops by sometimes with his family for a breakfast“. 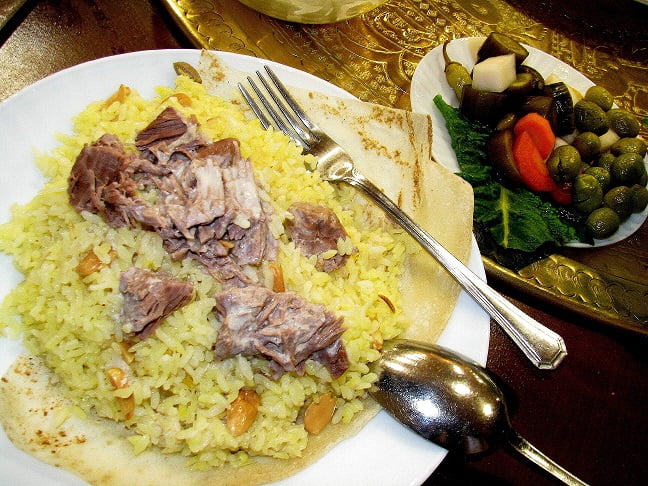 One more yummy dish I just have to mention! It’s the main course, the traditional Arabic and Bedouin dish called the mansaf. You will be served a thin slice of pastry covered with rice cooked with nuts and tender lamb meat boiled in yogurt. I liked it so much that I have actually cooked it few times myself back in Belgrade! 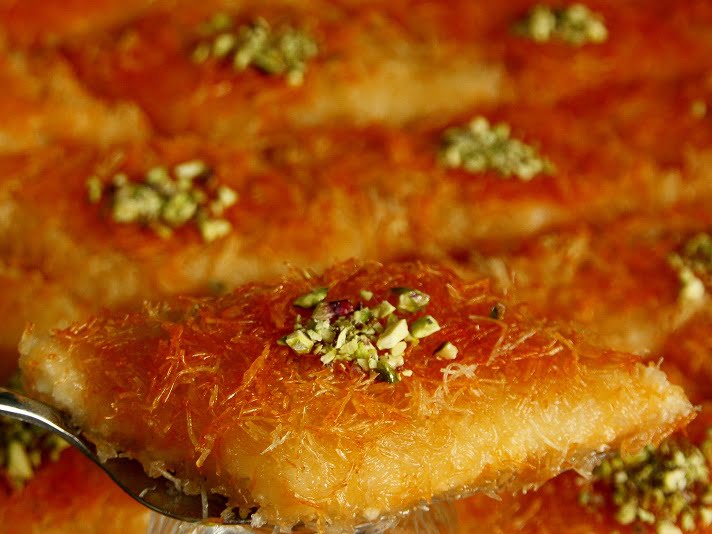 There is also one adorable cake, typical Arabic sweets soaked in sugar sauce. You will get the kadaif pastry with soft cheese in the middle. It gets heated up and the sauce is poured down, so that the pastry gets crunchy and the cheese melts… These are the famous Arabic knafeh (or kunafa)! Ever since I have tried it for the first time, I tend to bring another kilo with me to Serbia every time I visit! And what ever Arabic country I went to afterwards, I have always tried to find knafeh to buy. 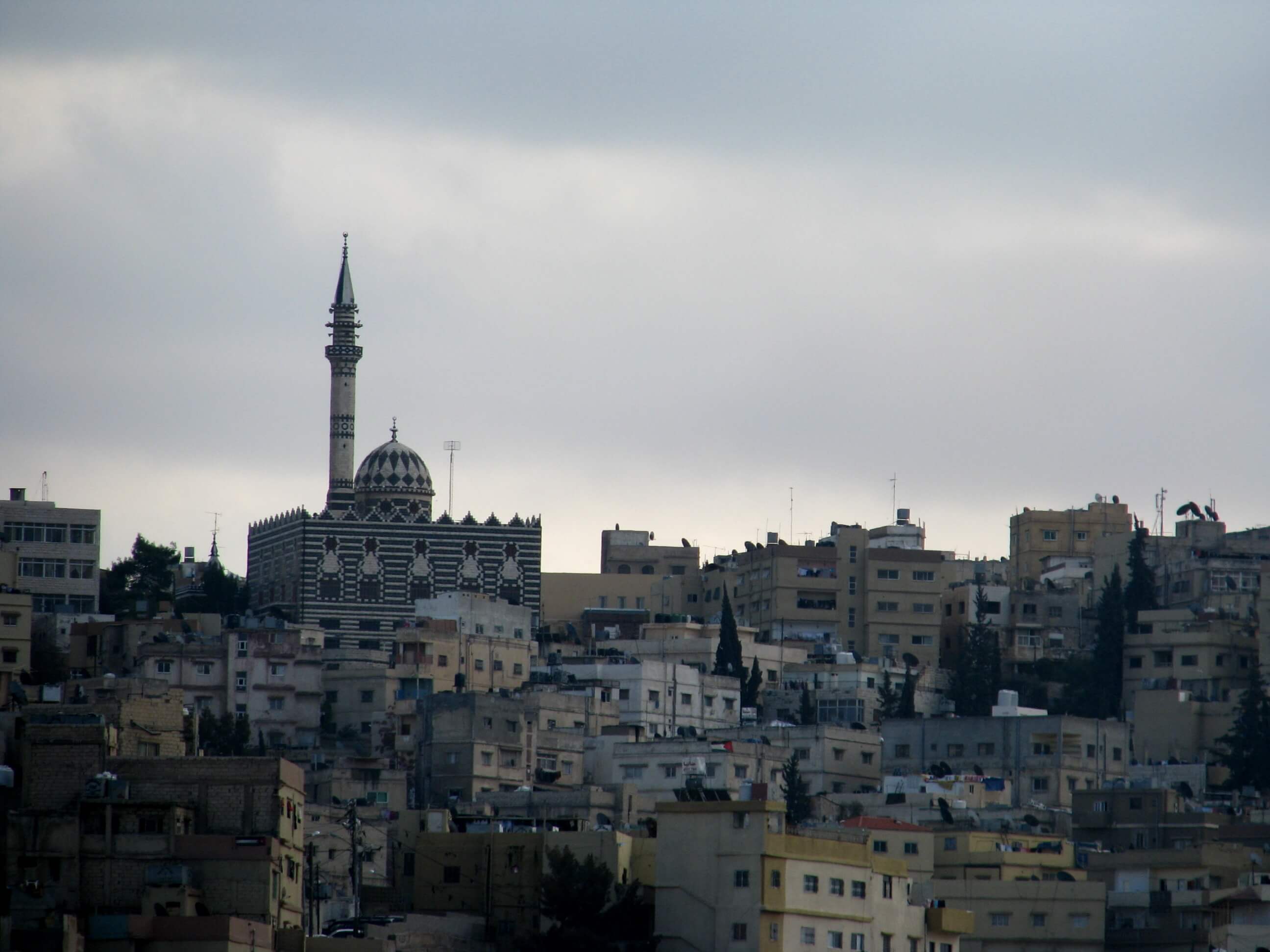 I should probably go back to my things to do in Amman before my mouth start to water.

So, there are two popular mosques, besides the one in the Old Amman, that can be seen from many parts of the capital. They are situated on two hills and the modern city of Amman now stretches up the 19 hills in the town area. Those are the blue-domed Mosque of Malik Abdallah – the one Jordanians take great pride in because it was designed by one of the best contemporary architects, and the Abu Darwish Mosque – unique in its decoration in two-colored stone. This was the one I often took a glimpse of when going around the city and was impatient to visit. 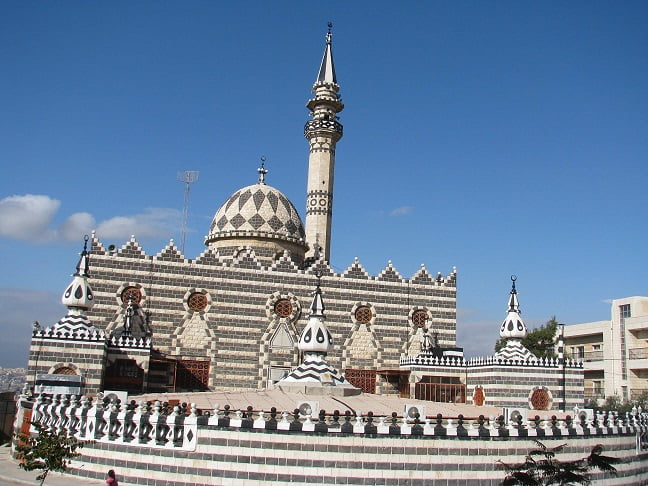 The Mosque up front

And finally there it was! It’s located in the neighborhood mostly populated by Armenians. As soon as I have approached the mosque, children gathered around me, amused by the camera and the screen where they could see their own faces. The whole commotion would probably last longer if only my responsible taxi driver didn’t come to see „what took me so long“. 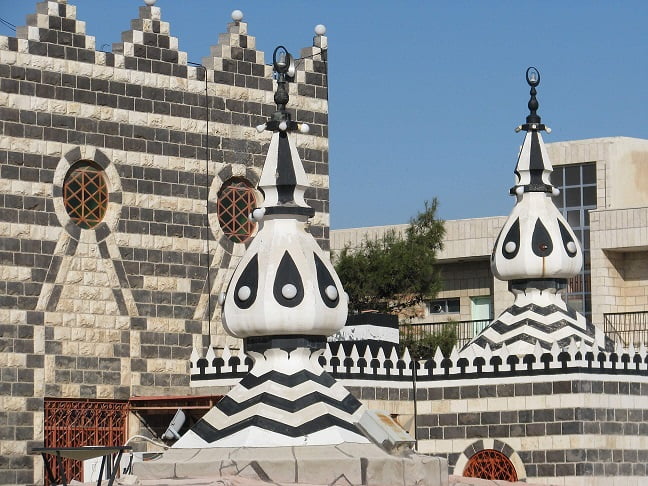 The view from up here is priceless. And the Abu Darwish mosque is even more charming in person, just look at these photos!

If you ask locals about things to do or what to see in Amman, they will probably refer you to shopping malls. They are always crowded and you will find shops, movies, restaurants in there. You can stop by one of them, why not, but believe me – they are like any other shopping mall in the world, except for more people here in traditional abaya dresses and white dishdashas. 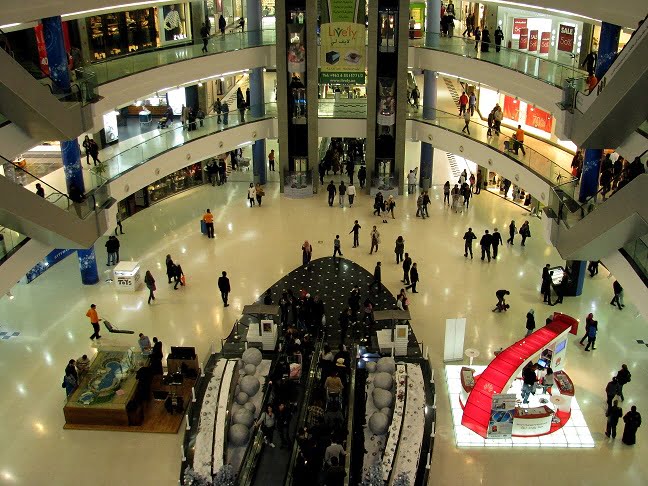 One of the shopping malls in Amman

One more detail you might find interesting. The capital of Jordan is also known as the „white town“ due to the local law, as I have read somewhere, that every building or a house has to be constructed out of the local white stone. So, go to any observation point in the city and there will be a view of one whitish and hilly city! 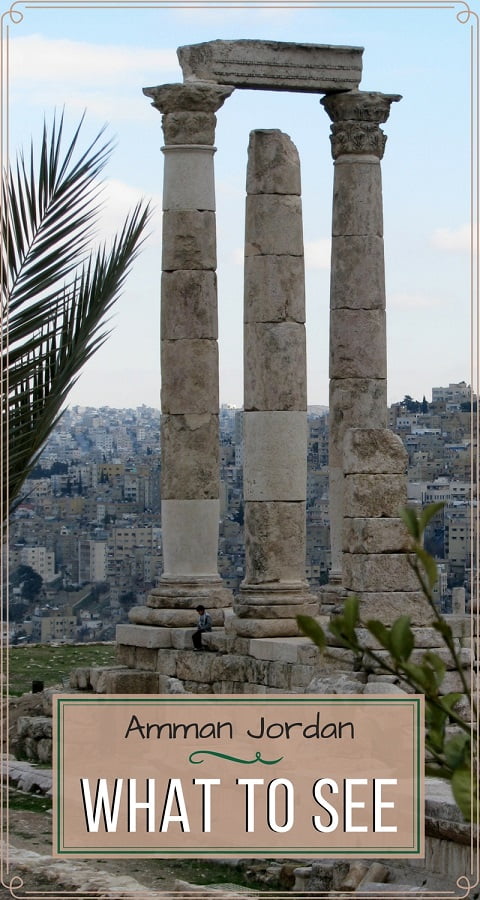