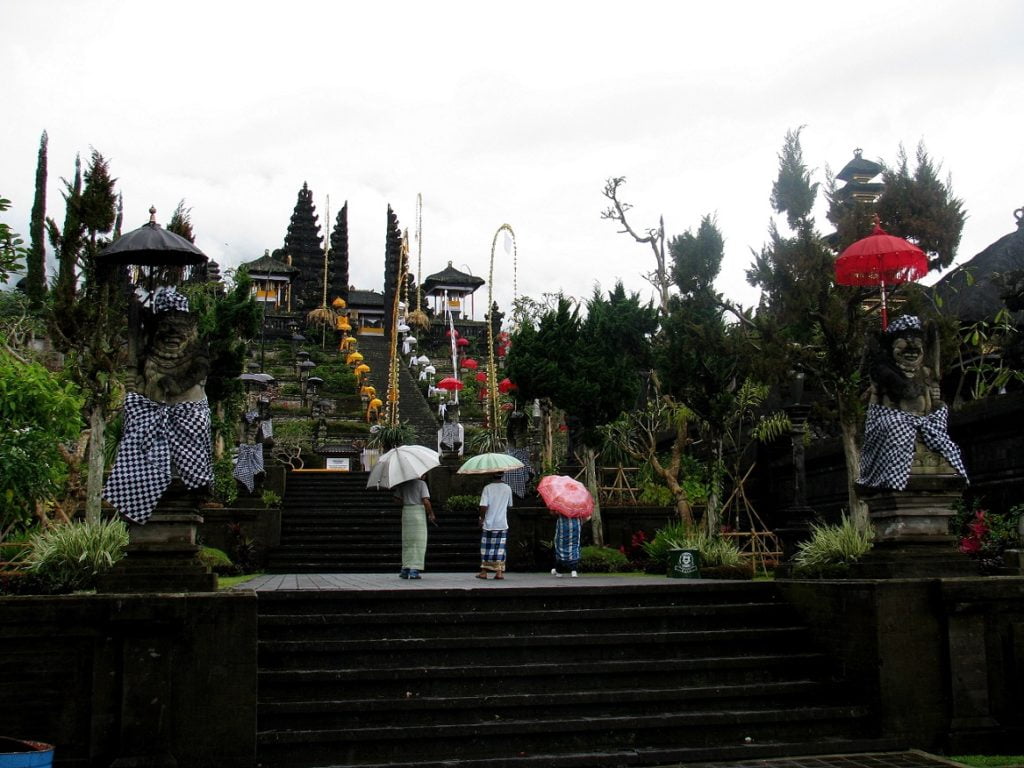 One of the landmarks I was eager to see in Bali was the so-called Mother Temple. It looked so surreal in all the photos I have seen thus far and I was so curious to climb up the ancient steps. 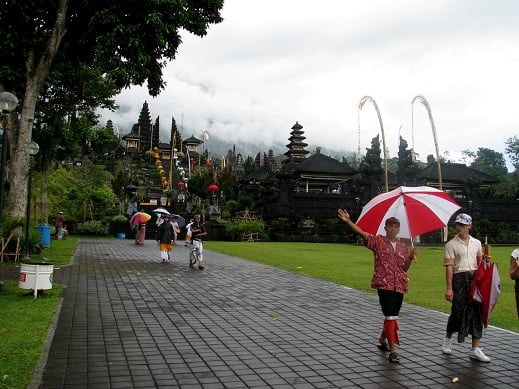 The path towards the stairs

The guide took me to one of the sarong workshops where women painted beautiful patterns onto textile. In order to enter any Hindu temple in Bali, you are supposed to be dressed appropriately, meaning you should wear a long-sleeve top, cover your knees with sarong with sash tied around your waist. It’s possible to rent sarongs and sashes, but I thought that the genuine sarong would actually make a lovely souvenir. 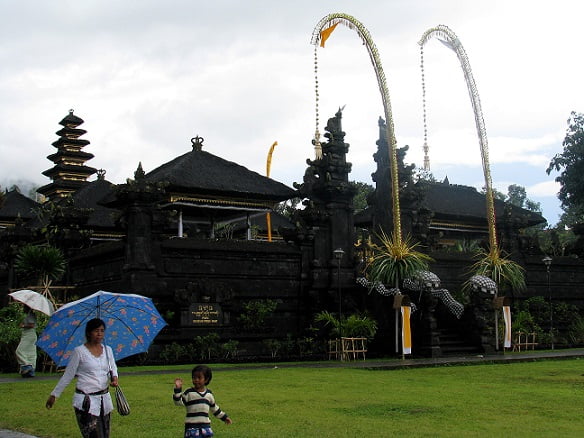 Sarong is a must

I was taken through the workshop and explained the technique of making those beautiful batiks, and I have chosen one with lovely large flowers. I was also told that there was a difference between these and the ones you can find on every corner of the island, poorly painted and quite cheap. (So true, be careful how you wash both. More about it in Glimpses to come.)

Anyway, I was ready for the Mother Temple! 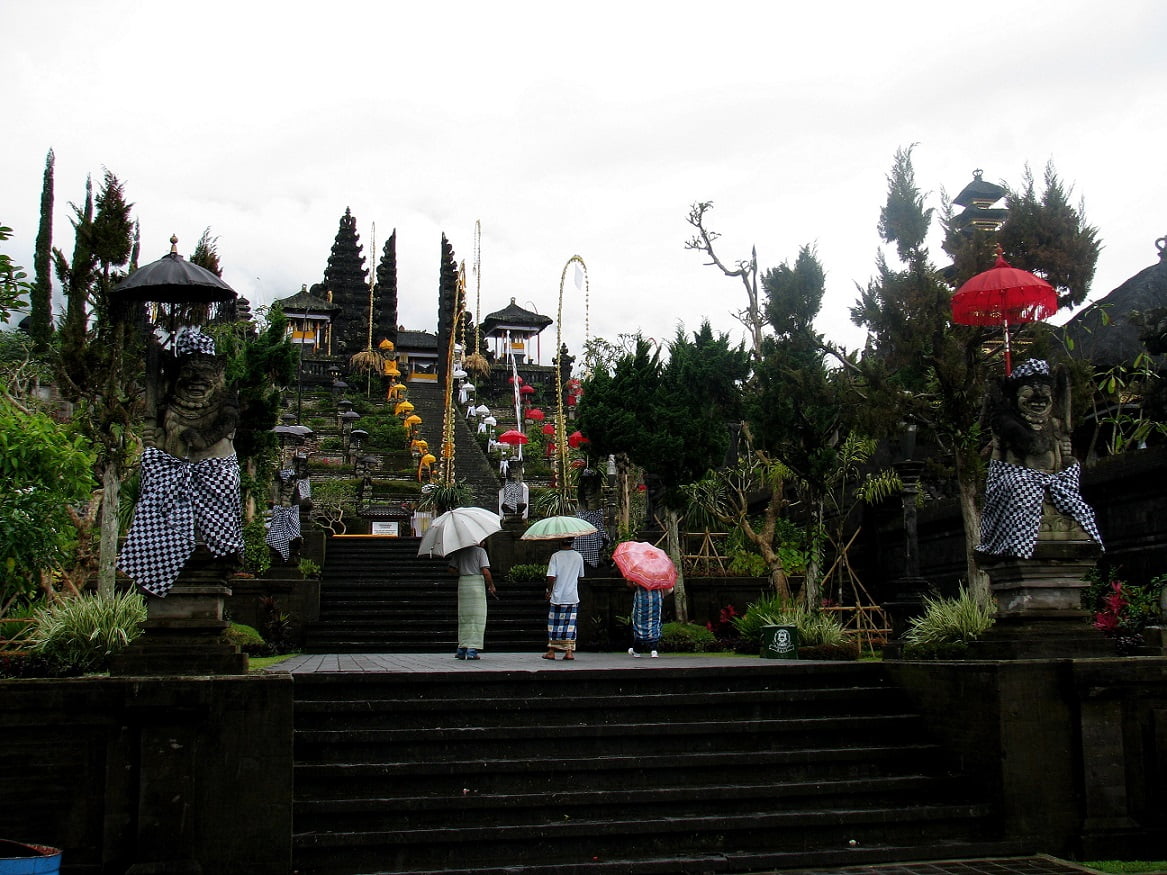 Going up between the statues

It was raining again, as it often does in March. (See the previous Glimpse for more about the Bali weather.) The sky was pretty clear in the morning, I even had my morning swim. But by the time we took off, bought the sarong and visited the workshop, dark clouds have thickened up above, announcing another one of the usual rainstorms. Still, you don’t mind getting wet when temperatures are pleasant and when you know that the sky is going to clear up in another hour or so. 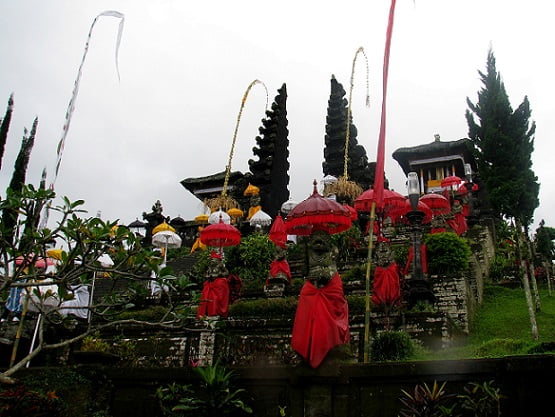 Every color has its meaning

Up the Mount Agung

We were driving up, reaching the Mount Agung where the Temple was located. (More about the Agung is still to come!) You can’t but admire the scenery along the way. People were walking in the rain, barefoot and with the huge banana leaf above their heads instead of umbrellas. It makes you wonder – how much does a man actually need? This seemed so simple, but sufficient, people were acting according to their surroundings. And we, the tourists, we were the foreign object here, the one that bounces off the scene, worrying about our “brand new sneakers”, plastic umbrellas, expensive bags and backpacks that shouldn’t get wet, because we have all sorts of tablets, batteries, chargers and cables inside. Oh, how complicated! 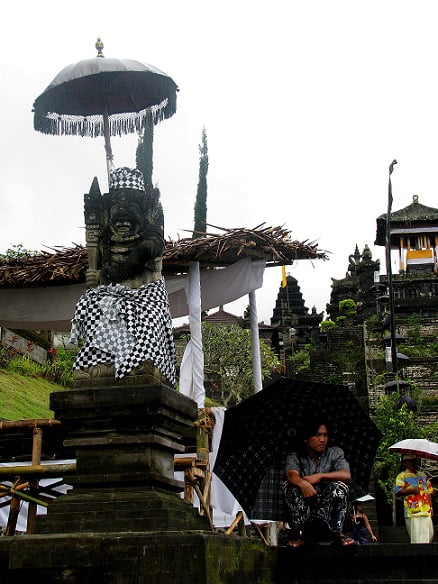 One of the nice scenes along the way

It shows even more when you get to the Temple. Let me tell you few things about the place. What makes it even more surreal is the fact that it is located in the mountains in the altitude of 1,000 meters, on the slopes of the Mount Agung. Do you know that this is the biggest temple in Bali? Yep, it’s one of the most holy, built in the 11th century. It’s also known as the Besakih Temple. 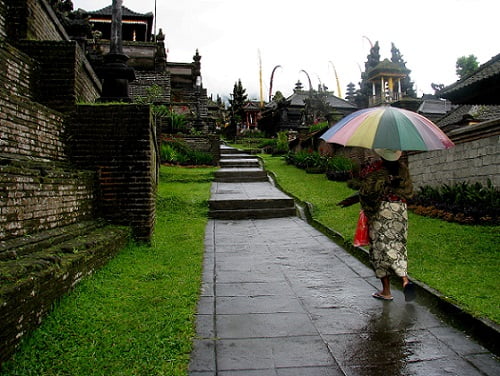 Numerous shrines on both sides

It is the unique complex that includes at least 86 temples. Just imagine those beautiful constructions made out of the black stone, placed on the hill overlooking the green rice paddies! The contrast of decoration colors is breathtaking. Along black walls and sculptures you will see huge parasols, white, gray, red and yellow, and sarongs and flags in different colors. Imagine the gray sky above all that and that was the scene before me! Such powerful mixture of man created structure amidst this beautiful landscape! 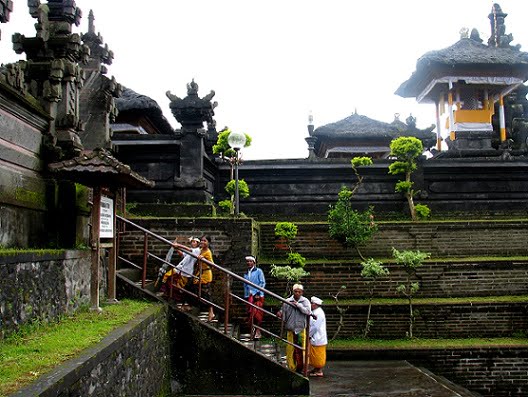 Pilgrims on the way to the shrines

(Well, just look at what I have chosen for the blog’s logo picture and you will get how impressed I was by the Temple! These parasols in different colors that now also represent my travel blog on all the social media, actually originate from the Bali’s Mother Temple.)

Be prepared to take many stairs here that go up and among the numerous temples of different types, status and functions. Pura Besakih features three temples dedicated to Hindu trinity. The one in the center with white banners is dedicated to Shiva, the destroyer, the one on the right side has red banners for Brahma, the creator, and the third one represents Vishnu, the preserver, with its black banners. Many of other temples’ inner courtyards are closed to public and reserved for pilgrims. 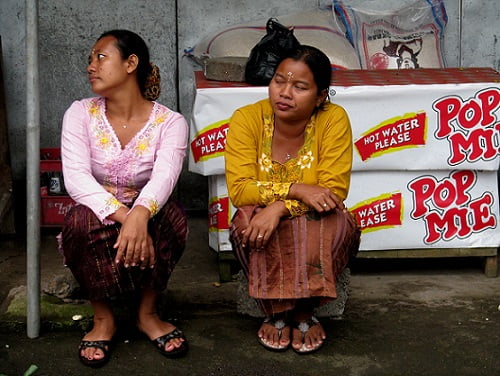 Resting after the ceremony

Dedicated to the dragon deity

Pura Besakih area was regarded a holy place since ancient times. A part of it is built by the 8th-century monk who called it Basuki, referring to the dragon deity Naga Besukian, believed to inhabit the Mount Agung. The name in time turned into Besakih. Other shrines were added in time. 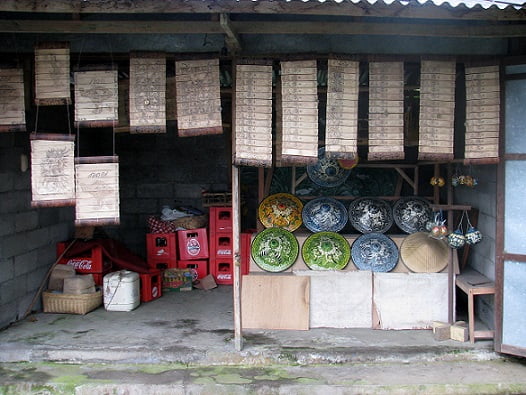 Even though the place had several restorations due to earthquakes damage in 1917 and series of Agung’s eruptions in 1963, the complex still stands in all its beauty. They say that the lava flow passed by Pura Besakih and it’s believed to be a miraculous message from the deities who actually demonstrated their power this way. 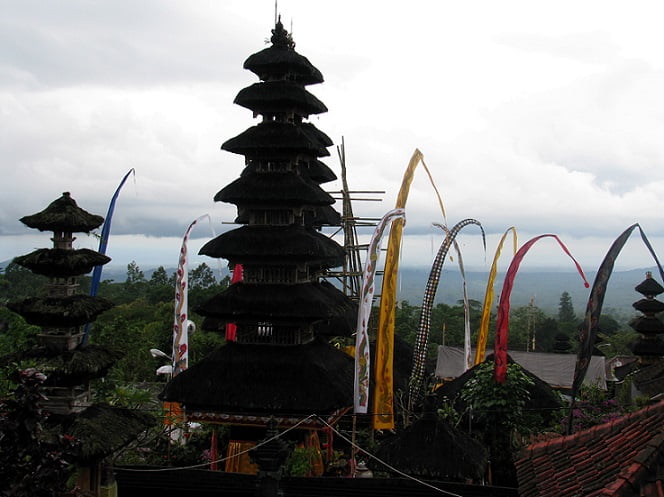 Fascinating structures in the complex

Different areas of the complex represent the seven layers of the universe, each with their own shrines. It would take you about 30 minutes going up the stairs in order to reach the temple closest to the Mount Agung’s peak. The place is vibrant throughout the year, since there are at least 70 ceremonies or religious celebrations held here, as each shrine has its own anniversary. The best time to visit is in the mornings or in the evenings, even though it’s usually crowded all day long. 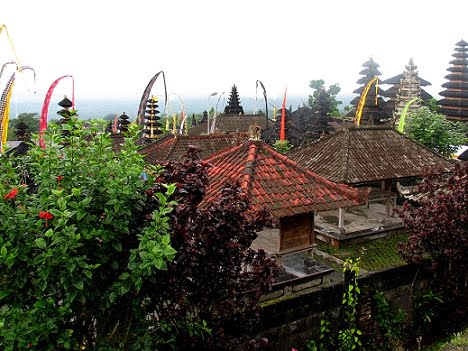 Different layers of the temple

As I said earlier, you can rent a sarong and a sash here, or you can even buy one in front of the Temple given that there are a lot of stalls near the entrance. Still, try to change the money in the city you are coming from. If you are not visiting with your own guide, you can hire one here, or you can just stroll around by yourself and admire this fascinating complex. Also, women are not allowed in during their menstrual period. All in all, you will have one memorable experience. 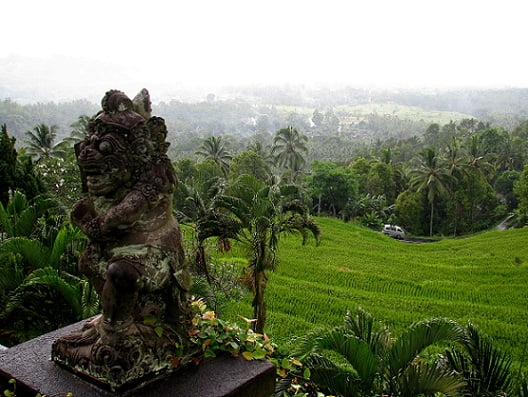 Misty view from the Agung

When I think of the Mother Temple now, I often evoke the scene of glancing down to my feet from time to time, trying not to slip climbing the stairs in the rain. Then I look up, holding the umbrella in one hand and sarong edges in the other, passing by beautiful statues, vibrant fabrics and parasols. And then I reach the top temple and the view from up there… Oh my! 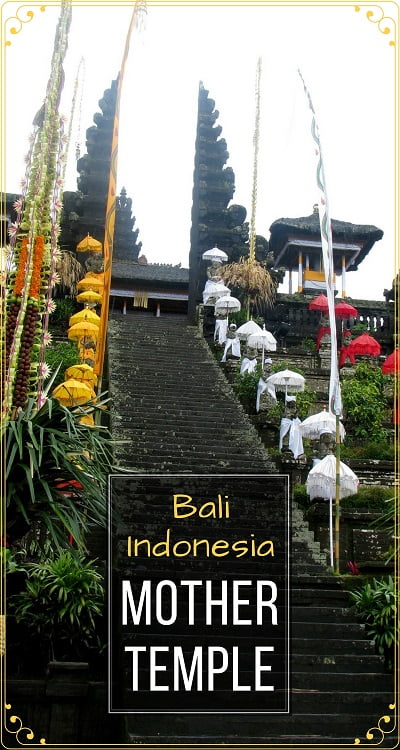