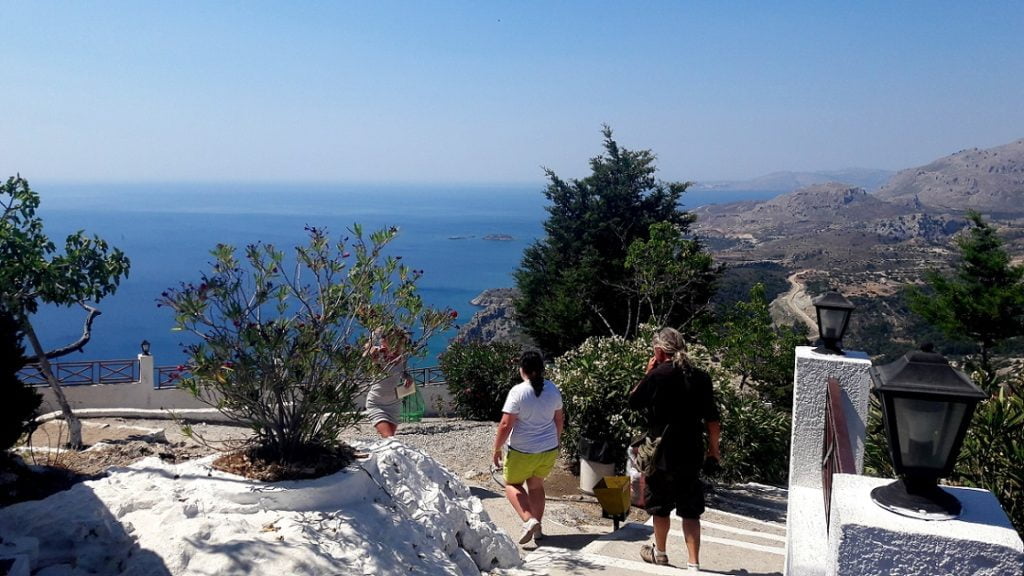 There is a lot to see on Rhodes and I was planning for days to take a car and just drive around the whole of this Greek island. There were couple of lovely trips and walking tours – through Rhodes city or to Lindos, and I have covered it with our Odeon World Travel guides here. I did have lovely time, but I haven’t seen it all yet. And my feet were itching! More and more each day! (Some of you will recognize the feeling!) 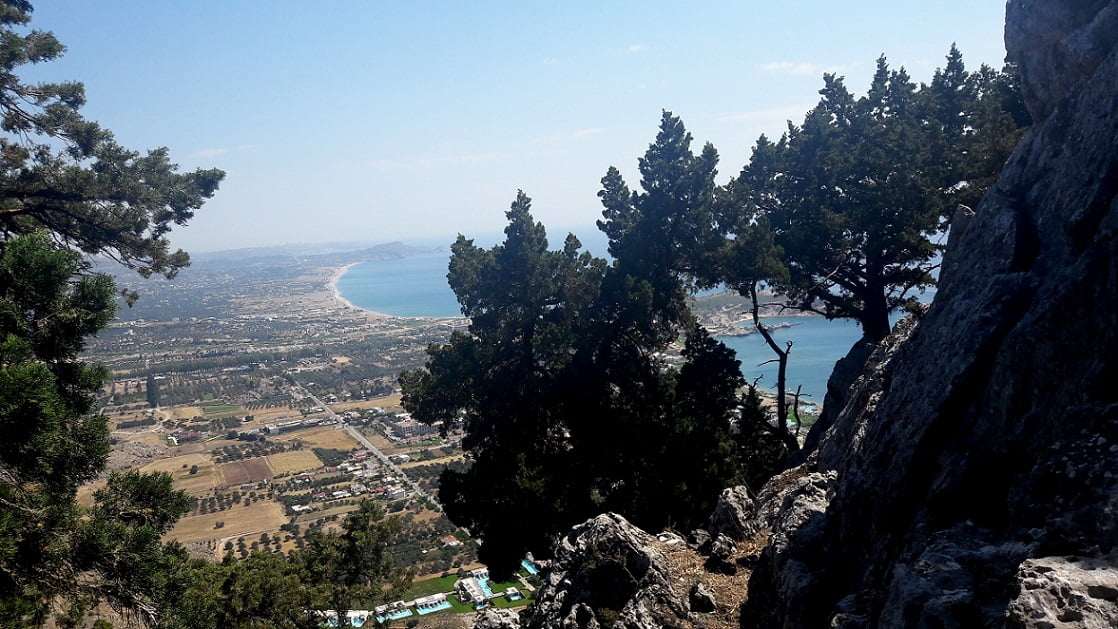 Anyway, it was when I have stumbled upon Nikos and his Ruote Car Rental that I knew that the time has come! Went early in the morning to pick up the car and was so excited that I will finally do the roadtrip. (Driving that cute, yellow one, remember!) Since I have seen most of the island, visited Faliraki, Lindos, Therme Kallithea etc, my plan was to go straight to Tsampika, then to drive back a bit and take a break for a swim at Afantou Beach, while the next stop would be the Prassonissi Beach at the other peak of the island, opposite to Rhodes town and about 109 kilometers away. Another break there and then to explore the west side of the Greek island, the one that is often overlooked because of wind and waves. 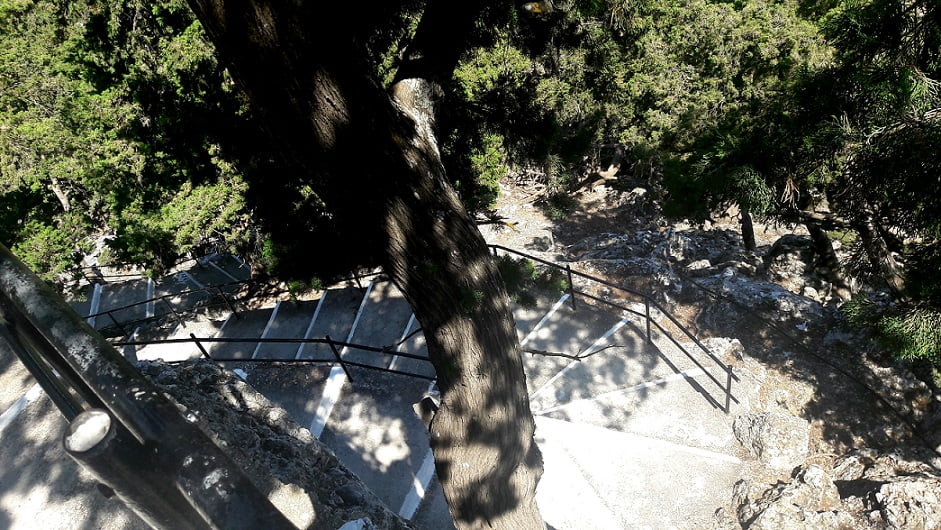 Steep steps towards the Monastery

Pilgrimage to the Monastery

So, while you enjoy the view from the hill above the Tsampika Beach (and it’s even more breathtaking in person, believe me!), let me tell you about the monastery that I have actually came here to see. It is the Monastery of Panayia its Tsampika e Kyra, the Virgin Mary of Tsampika or Our Blessed Lady, about 26 kilometers from Rhodes town and on the top of the hill that goes up to 300 meters in heights. (Greeks usually read letters “m” and “p” when combined as “b”, so I am not really sure if this is pronounced Tsambika or Tsabika.) 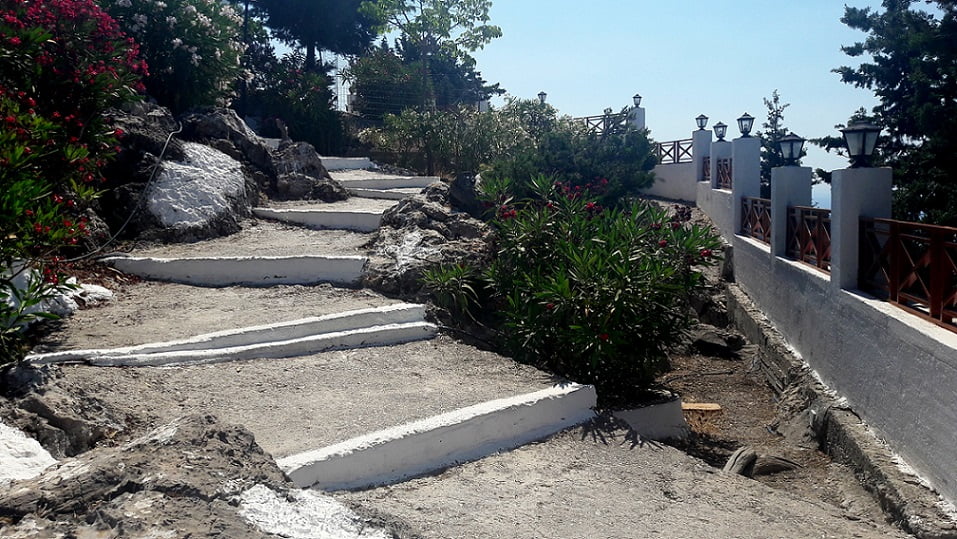 The last 50 steps to the top

There is a road to some point, after which you have to climb another 300 steps on foot to a small church. It was build in the 16th century and its feast-day is on September 8 with a traditional festival. But, the thing that made the Monastery widely popular is the icon of the Annunciation, the miracle-working object, they say. 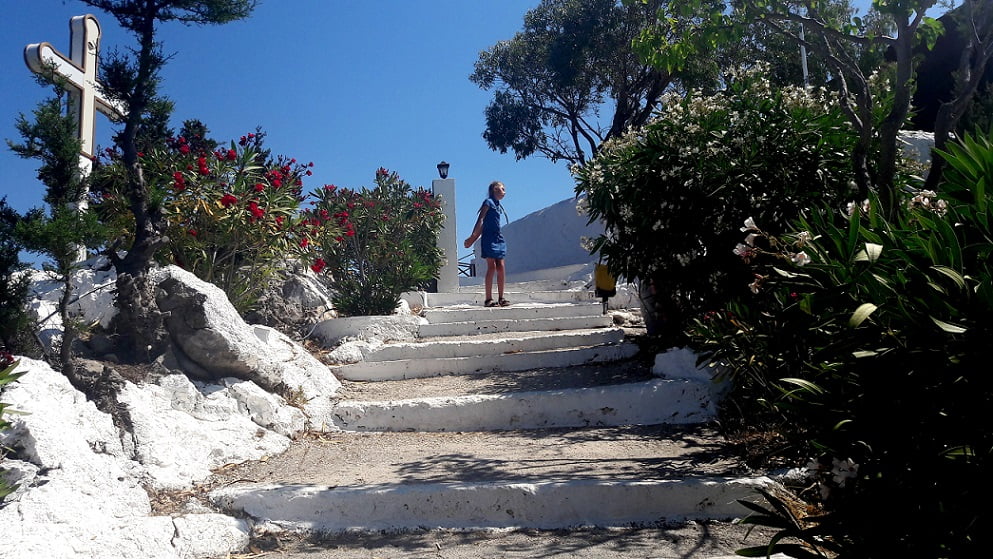 Large cross near the entrance

The story goes as such: women with conception issues come to pray to Our Blessed Lady here and they take a special pilgrimage routine. Among other things, they are supposed to climb these steps barefoot or on their knees. The pilgrimage consists of special fasting and other “rules”, but after paying their tribute to Virgin Mary and they have their newborns, they name them after the Virgin here. So, they say that when ever one meets Tsambikos or Tsambika in Rhodes or Greece in general, one can be sure that his or her mom went to the Rhodes pilgrimage!

The church with miracle-working icon

Such an amazing story! I was thinking about it while coming down those steep steps (after taking few dozens of photos from the panoramic terrace of the church!). Remember seeing the miracle-working icon inside and a couple sitting there in front of it… “Best of luck”, I thought, “I wonder if it’s going to be a boy or a girl!” 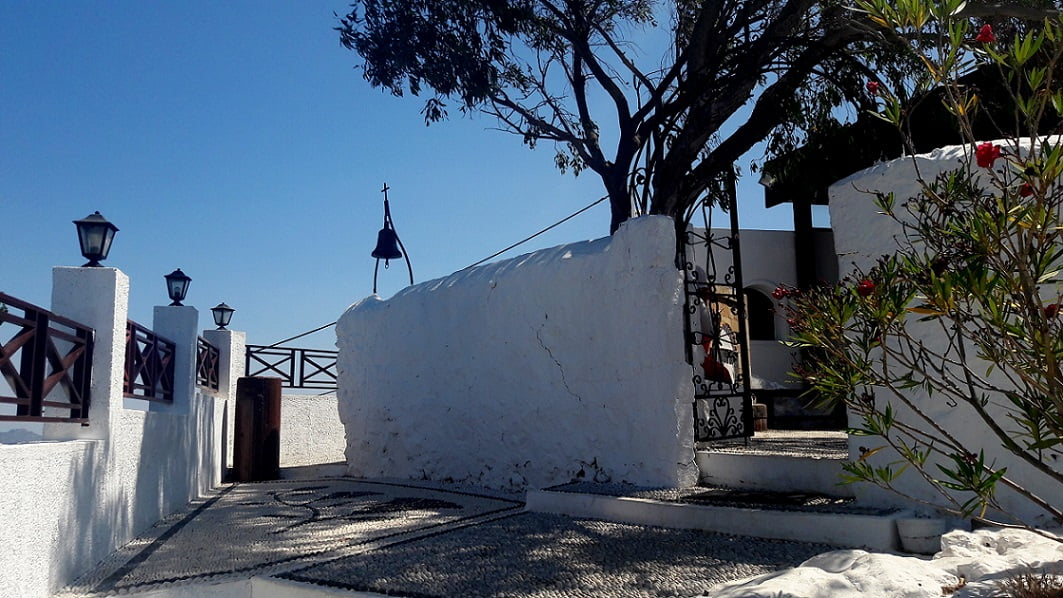 Chochlaki floor in the courtyard

When you come down, you can turn to Tsambika bay with lovely white sands and turquoise waters. They say that money from renting sunbeds here goes into the Monastery contribution box, so people tend to joke that “sunbeds are rented by priests”. Cute little story (not intended to hurt or insult anyone, of course). 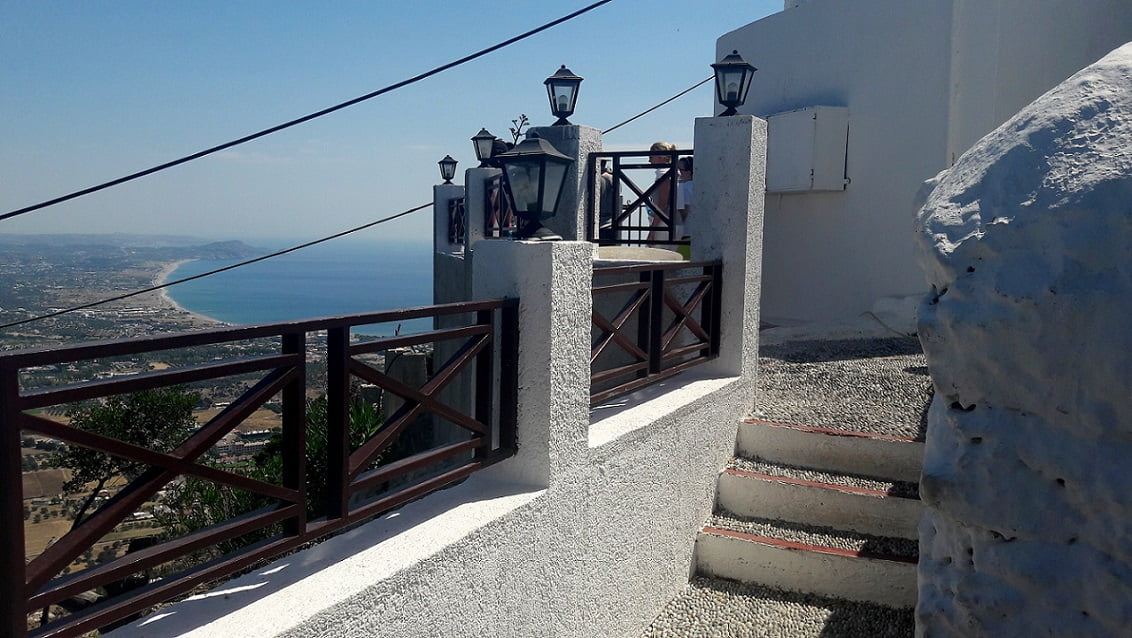 Lovely white terraces around the church

Short break for a plunge or two

Okay, so this was the first stop. It took a while to climb up, stroll around the hill, I even got me a Greek coffee at the restaurant below, next to the parking space. The view was amazing! I could see the long Afantou bay, the beach I was going to next… And I am not going to tell you about the beach, since one of the last Glimpses was dedicated solely to sand, pebbles and rocks, so you can find out more about Afantou there. The important thing for our today’s story is that a plunge or two was just what I needed, since it was already too hot. Stood there in the sun a bit, enjoyed the scenery (and it was possible to see the Tsambika hill from here as well) and took off in my yellow car. 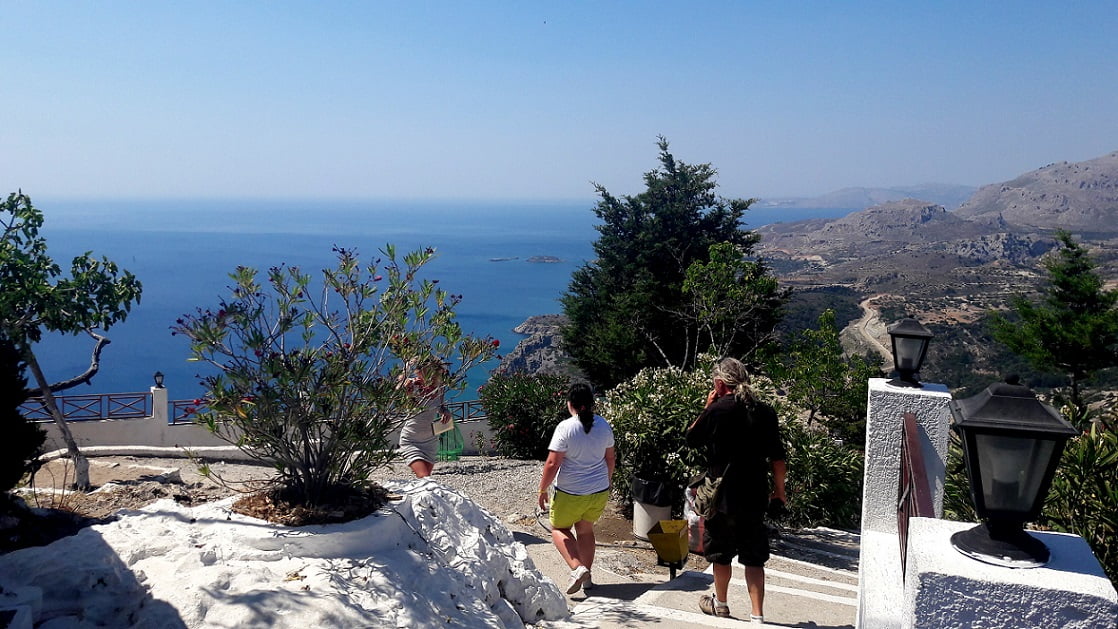 It will take me another 85 kilometers or so to reach Prassonissi, my next stop. Didn’t know if there was anything there except for a sand strip with a small rock island at its end, and a lot of surfers, but I was hoping there would be a restaurant or two, or at least a super market. Was a bit hungry already… 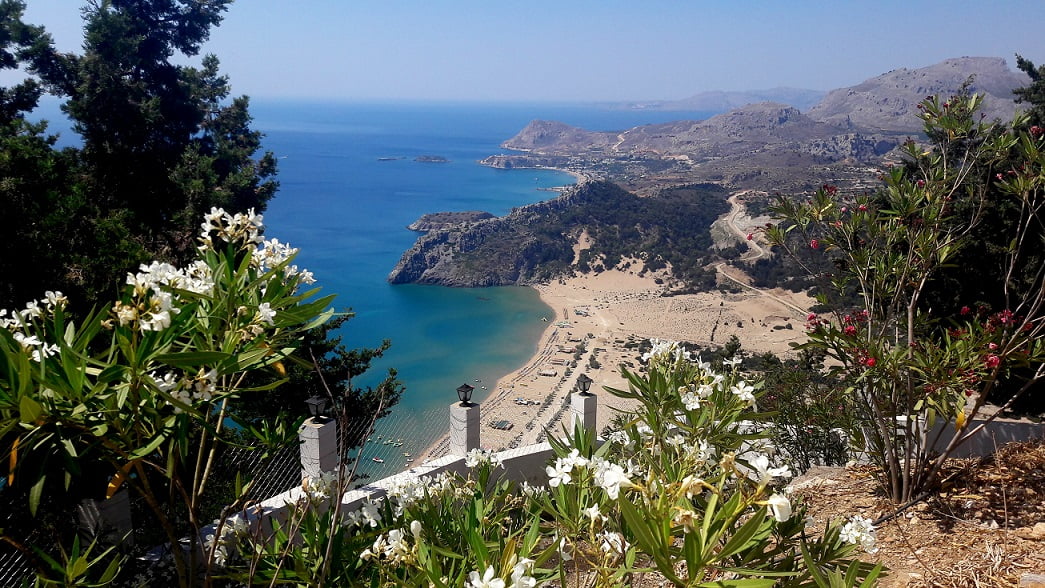 The east coast, the beach below and the view towards Lindos

But for now, I was trying to concentrate on the road, since I didn’t want to turn to Lindos that I have already visited, but to take a shortcut that passes by this peninsula. Passed by Kalathos and waited for another sign, since here the road goes left to Lindos and right to Pylonas. Held the map Nikos gave me right next to me… 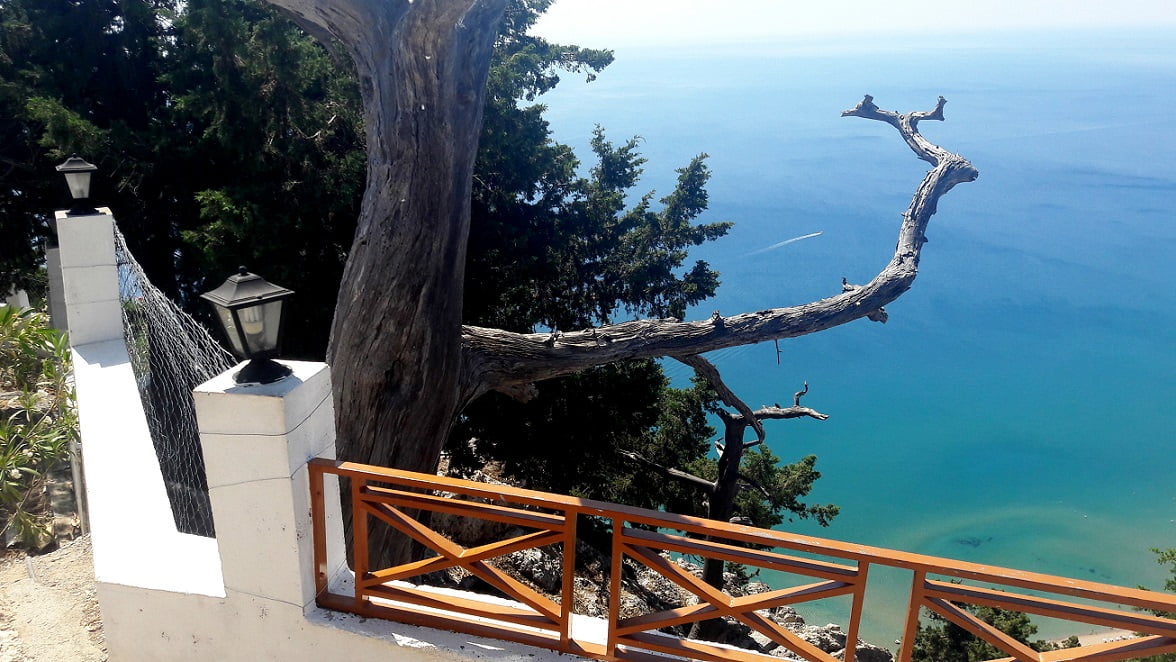 View of the horizon over the Mediterranean Sea

Don’t know if you have noticed when driving around Greece, but here is the reminder – Greek roads are well marked, and so they are in Rhodes accordingly, but you will rarely find a road sign much ahead of a small crossroad. Try not to rush when approaching, since the signs are right there, at the very spot where you are supposed to go left or right. Hence, it’s very easy to miss your turn… 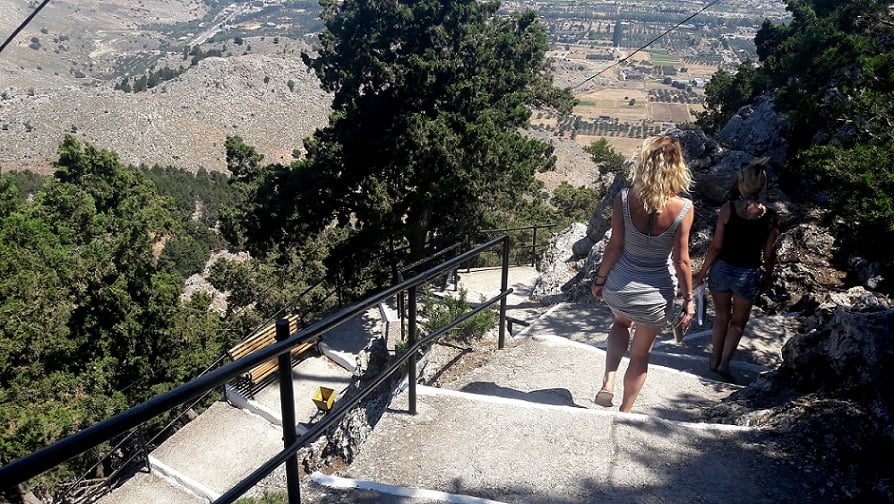 Going down from the Monastery

And look, it says “Pylonas”, it’s the right way to go! I even stopped to see the small church of Saint Gerasimos there, cute architecture. Love to travel like this, to be able to stop when ever I find something worthy, enjoyed this trip immensely! 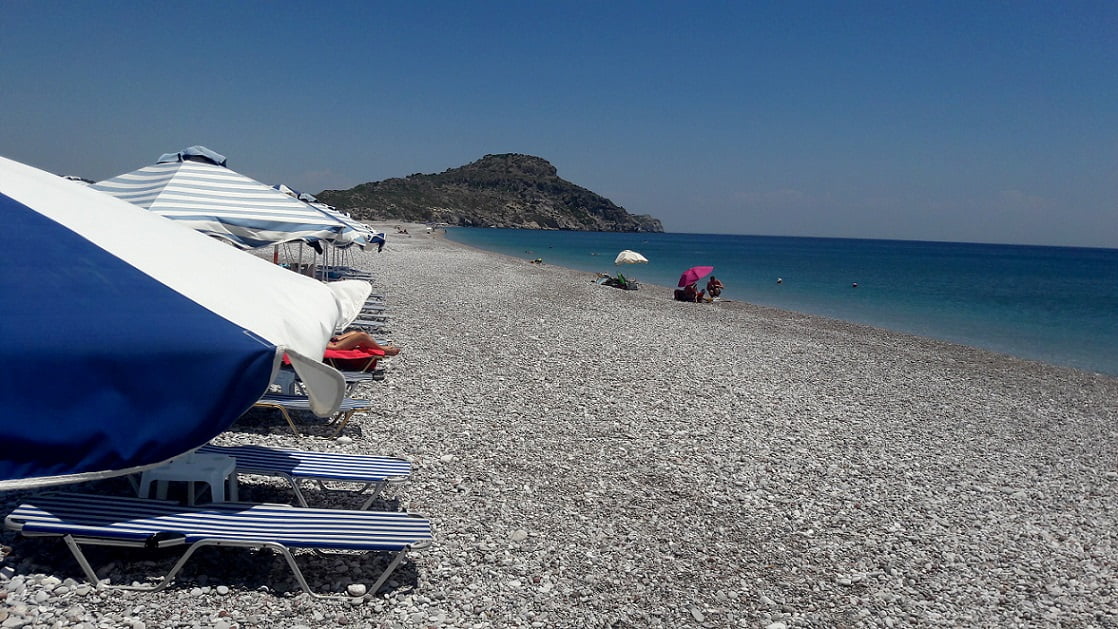 I have passed Lardos and Gennadi, two villages along the way. And had to stop to take a photo or two, since the scenery has changed from another beach area – the Lardos Bay, to rocky shoreline on the way to Gennadi. There was one more long beach, and it seemed that this would be the last settlement with shops and such, at least until Prassonissi. And when I get there, who knows! 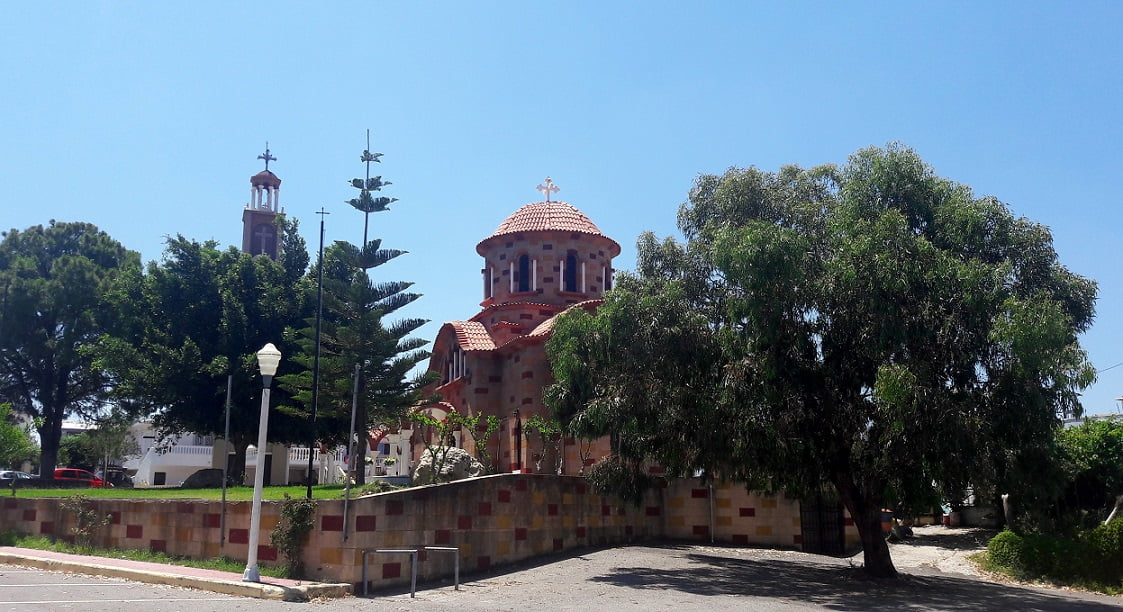 Church of Saint Gerasimos in Pylonas

And that is actually how it was, looking through the car window at least. All the way from Gennadi to the southernmost place of the island the road goes along the coast. You can see villas scattered on both sides, some greenery, narrow ways turning left towards beach areas. (This would probably be too far to go on a scooter, since it’s just too hot to be out there in the sun all the time. My little air conditioned car was just the right choice!) 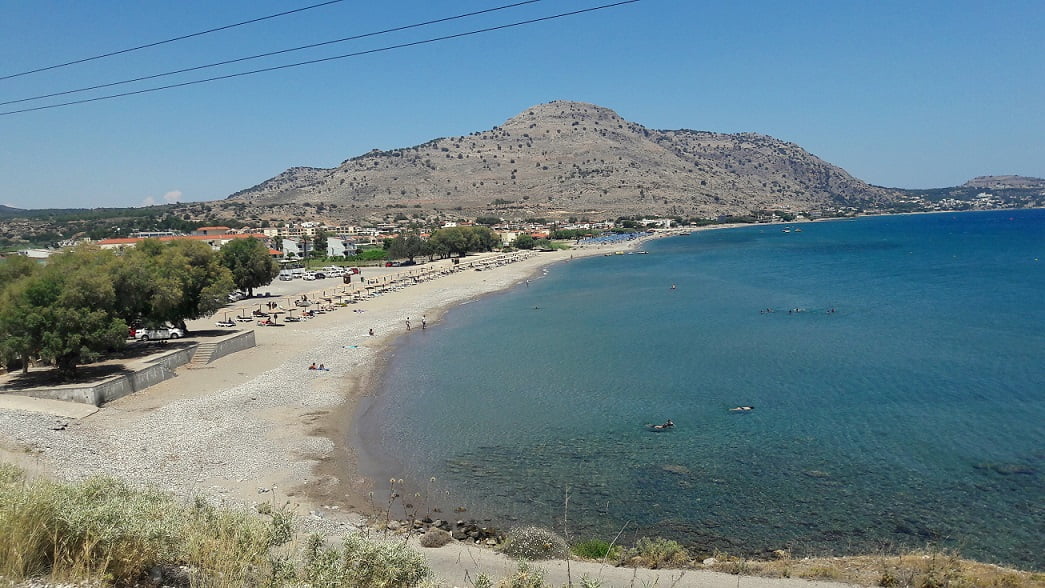 Lardos Bay next to the road

Enjoy the ride, there’s no way to get lost. Follow the main road and you will get to Kattania. Another road sign there (at the very spot where you should turn left!), and you are on your way to Prassonissi. (More about it in the post about Rhodes’ beaches!) 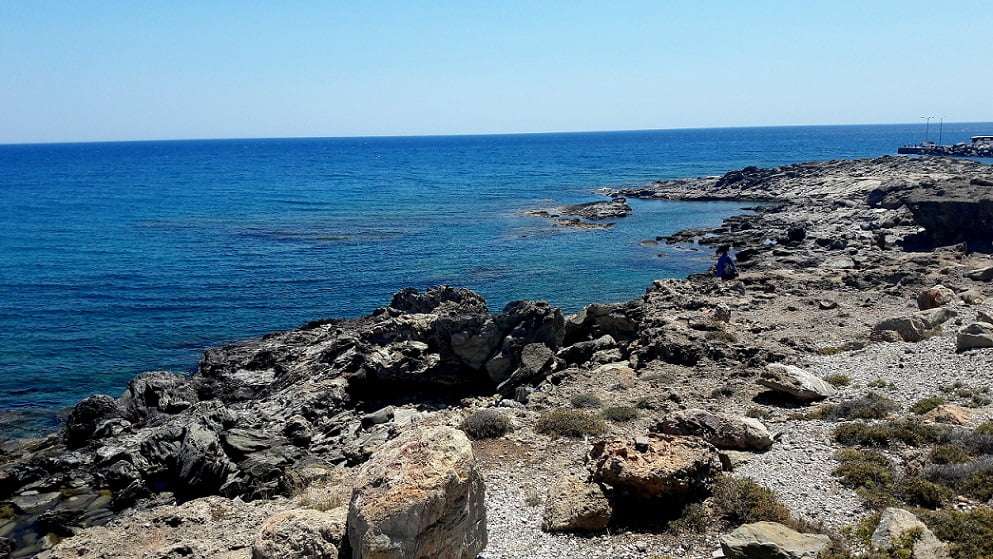 Reached the other peak of the island! And there was everything I needed! I took a long swim at the calm Mediterranean side of the beach, walked around the sandy strip in my bathing suit, went to buy more water and to have something to eat, and glanced over to the windy Aegean side towards restless surfers. While another red kite was ready to go up into the air, I was looking at my map. Half way there. I drove along the east side of the island all the way to Prassonissi. Now, I will be moving “up”, driving the west shore, often underestimated because beaches are “prettier” on the east side, they say. 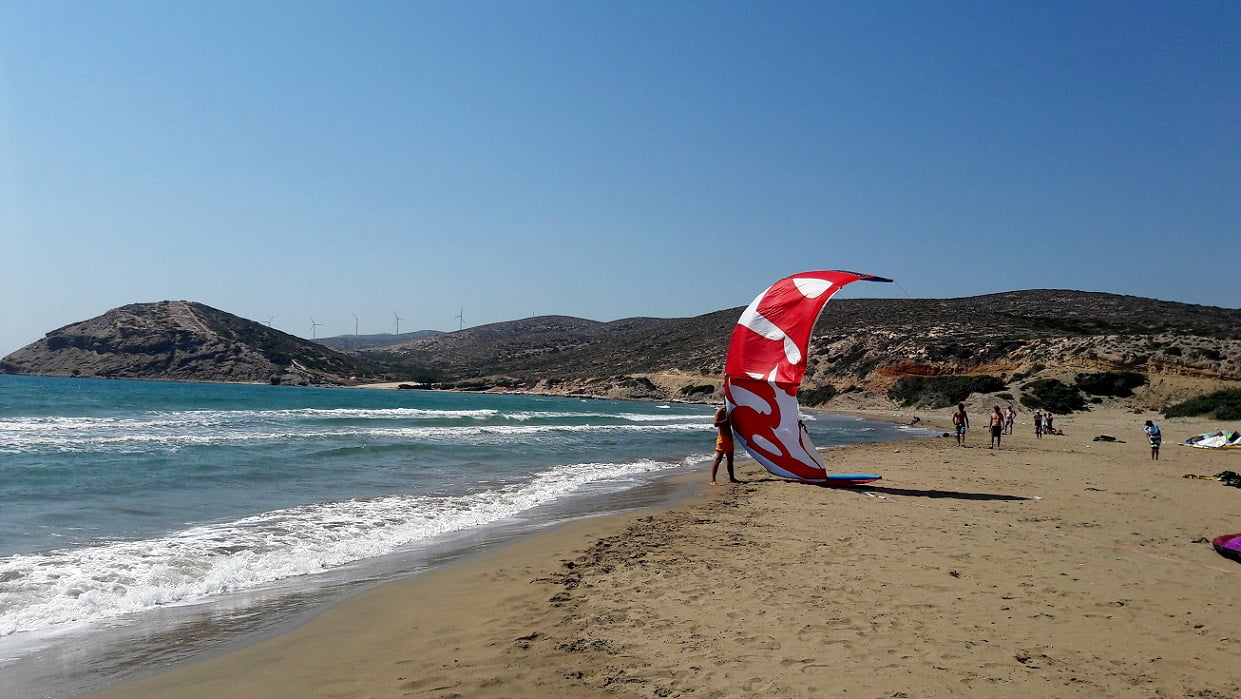 But, did you know that there is a small white village where you can easily get lost among narrow blind streets, or that there is the mountain peak of 1.215 meters, the highest point of the island, and the road goes all the way up! Well, stay tuned, since we are going up there next!

Next: DRIVING UP THE WEST COAST (8)