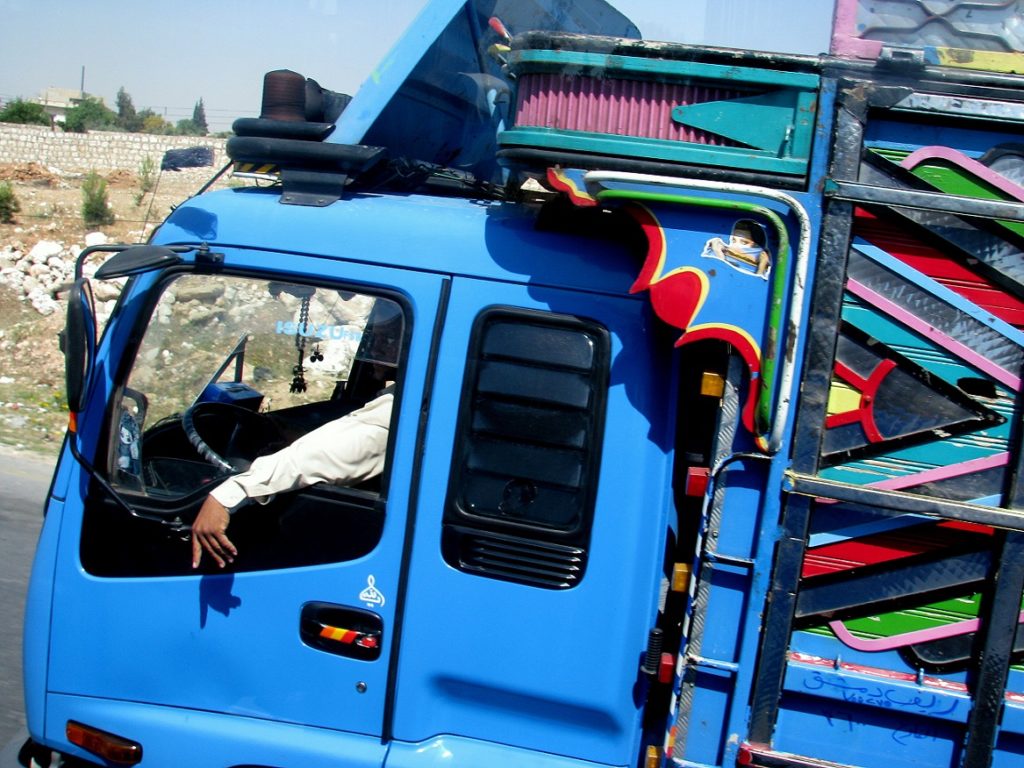 During the rule of the sultan Nur ad Din the great bazaar was reconstructed in Aleppo, the market this town was widely known for before the recent war. This was the covered Oriental souk where people came to trade, buy and sell goods in a manner they have kept live so many centuries.

Haggling along narrow passages of the souk

Spices, perfumes, textile, silk, carpets, jewelry, they all remain almost the same and while I was walking by those lined up stalls and shops in 2008, I began to feel as if I was coming out of the time-machine!

Every merchant tried to make me stop right by his stall, regardless to the goods he sells, being pistachios or gold. There were only few of them “not that interested“, who were relaxing on the top of the pile of sacks or were dozing behind their counters.

Typical scenes around the grand bazaar before the war

But one would have had to prepare himself to immerse into deafening noise, crowds of merchants who loudly advertised their goods, haggling all the way through. Only by the tone of the voice I have heard behind, I have actually suspected that someone was trying to warn me about some bike coming straight at me or a full cart man was trying to push through that narrow passage with goods „for a good price“, and always „just as made for you“.

Dozing behind the full stall

It was easy to spot Syrians there in the crowd because they knew what they came for, they were haggling, being all relaxed, buying things, while I was just wandering around, didn’t even recognize all the stuff I have seen, and the moment I stopped to take a second look, that was it, like caught up in the web!

Entrance to the Aleppo mosque

Well, it was kind of embarrassing not to buy anything after the guy has put such an effort into displaying all of his goods before me, even if it turned out that I have bought a traditional remedy “for male impotence“ while being – a female!

The deeper I went into the souk, the narrower those passages became and there was less day light coming through. Among further sections of the souk there was one that „specialized“ in meat. It was not that pleasant to see all those sheep heads hanging around, even the air became heavy here, it was a bit hard to breath in and out without feeling dizzy. Anyway, I just had to keep in mind that the exit was not that far where ever I was and that I would come out to the Citadel surroundings once again.

Aleppo was not just the town of the old souk and the ancient fortress, it actually had a modern district as well where you could come across flashy stores as anywhere else in the world. This was where Syrians came for a walk in the evenings. But, one just had to notice that there were parts of Aleppo which were just too neglected and ruined. One of the streets I went through was full of old charming buildings. There might have been some with the French influence and design there, but also with a lot of details typical for Arabic and Oriental style. But, these constructions were decrepit, looking like they will fall down right then and there in front of your eyes.

Friendly chats on the curb

That didn’t stop people who lived there to use what was left of the facilities. People just adapted to various circumstances, as they do anywhere else in the world. And so I was greeted by one cute, smiling boy who was sitting at his ruined terrace without any fence. It seemed he was cooling down up there.

Heavy traffic, vivid town, a lot of people were driving one of those small colorful trucks. For those who get thirsty, there were drinking fountains at every corner.

Well, they were actually somewhat improvised taps with tin pots chained to them. But if you were not that thirsty, bottled water was always an option and easy to find in any store on the way.

One more thing on had to notice in Aleppo – people were genuinely pleasant and they spent a lot of time outdoors. They used to bring out a chair or two, sit on the curb and chat. People from nearby stores were hanging out together, from huge courtyard of one of the local schools few girls came out, dressed in black abayas.

Beautiful Syrian woman in modern part of the town

A group of those pulled me into one of the courtyards to make a selfie or two, giggling all the time. I guess that my blond (not covered) hair was interesting to them as much as their abayas were to me. Still cherish those photos!

In various cafes (alcohol free) there were nicely dressed young men and women, chatting and having coffee and narghile. Guys selling coffee on the street was also to be seen, just like in Damascus. There was one beautiful mosque near the souk and a lot of things to buy along the way – from vine leaves, neatly packed, to donuts which the guy just kept „watering“ for some reason!

0 comments on “Homage to Syria: ALEPPO BEFORE THE WAR (5)”