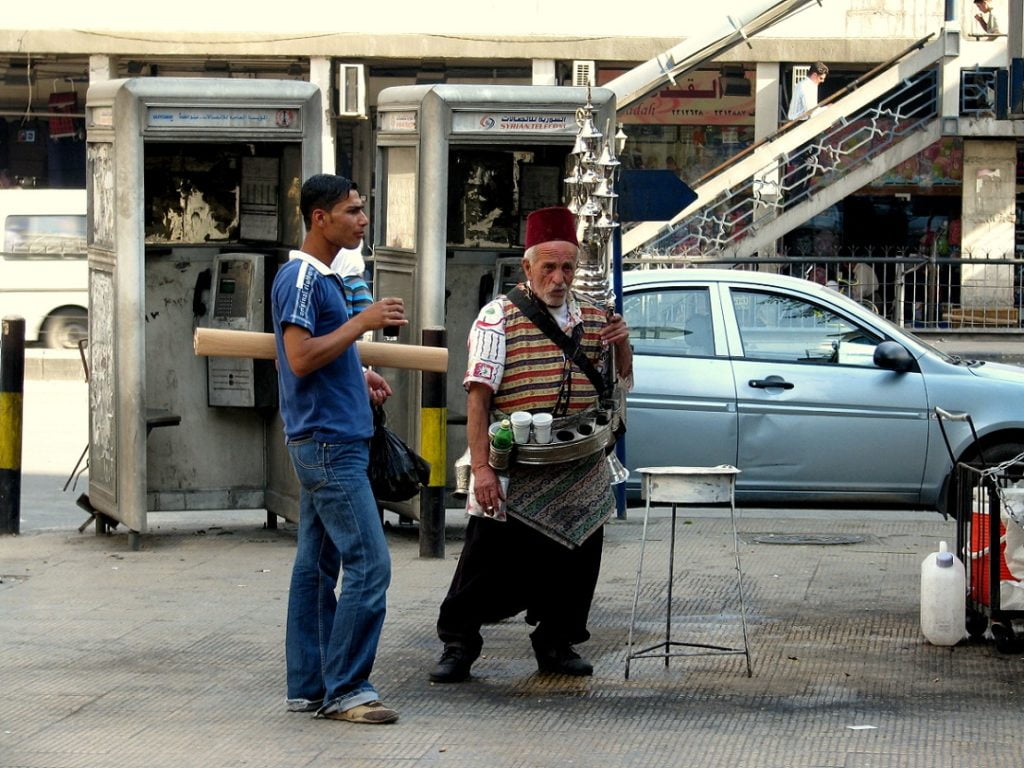 If you enjoy having your coffee outside (as we often do in Europe), in some cafe on the curb, you would have to put some effort in finding one in Damascus. At least that was the case before the war. I walked through numerous streets of the modern part of the city in 2008 only to come across restaurant signs hanging down from building walls.

Strolling around modern Damascus at dusk

Next to one large square, with huge fountain and an imposing sculpture, there was a name tag for a cafe with „all sorts of coffees to your own taste“. I followed the sign and ended up in one small courtyard deep into the area between surrounding buildings with concrete floor and few tables. Asked for Nescafe and got a small kettle with boiling water, small jar of sugar, the other one with the coffee and the empty cup – I was supposed to mix it, well – „to my own taste“.

I guess you can have a coffee in those small places where all the customers are local men, chatting, having tea, smoking narghila and looking at passers by. Well, I guess you can.

Meeting place for men only

I also didn’t know that I would have to pay attention when it comes to prices. It happened very often back then that a tourist asked for a tea price (being cautious after hearing about those Syrian „jokes“). He got answered with one price. But afterwards when he wanted to pay, waiter might have asked for the amount three times that.

Bustling boulevards of the Syrian capital

Protesting won’t make any difference since the guy would only shrug like saying „it’s your problem“. Even though Syrians are famous for being extremely nice and hospitable, one just had to keep in mind that they were poor and trying to earn any pocket change they could (since the average salary in 2008 was about 150 dollars).

Alcohol beverages could be found in hotels only. And one could not expect a variety of drinks. The most frequent one was the Barada local beer, named after the Damascus river, but I have heard some foreigners speaking also about a brand from Lebanon. In the authentic Arabic restaurants with live music one could only be served a non alcoholic beer that tasted like a bitter soda tea.

Colorful buses on the streets

Low economy standard was reflecting on the city itself, which ended up quite untidy. A lot of buildings in the modern part of Damascus were neglected, parks where people were resting in the shade were actually full of garbage.

Resting in one of the city’s parks

They are strict when it comes to dress code of their women, who are often completely covered, but if you are a female tourist it could easily happen that young Syrians would try to push through the crowd a bit more than they should, in order to come as near you as they can. The best advice is to avoid these „encounters“, since any reaction of yours will just be useless when those guys disappear and blend into the crowd, even though you have already started coursing out loud in your own language!

Still, tourists are not that polite as well sometimes. You can often hear European men protesting because their wives are looked at on the streets, but then again, they themselves jump right in front of every covered Syrian lady just to take another photo, without asking.

Pedestrian overpasses to the other side of the street

Syrian men are the ones who might react to this kind of behavior.

It was not that hard to go around the city. There were pedestrian overpasses above almost every larger boulevard, disposed just right so that one can easily go on foot. It was useless to even bother to look for a map of the city. I even confused few people on the street by asking them where to buy one. But, it was somewhat more interesting this way, you just have to go and explore – feeling lost all the time.

On the way, I have come across a lot of street vendors of mulberry juice and coffee, who poured it in a specific way and were dressed in a traditional clothes. There was one at almost every corner.

Strolling along thick walls of the Old City of Damascus I have discovered small districts selling only one type of goods. I have turned into one small street and there was a neighborhood full of tiny stores with pipes, screws and tools of all kinds. A bit further, after taking another of those „eenie, meenie, miney, mo“ turns, I found myself at the market – vegetables, fruits and meat. That was a hard crowd to squeeze through, bustling, haggling, pushing, jostling, and I had to watch my step.

In one of those small streets there was a market that was open for the whole day. Merchants came at seven in the morning, buyers appeared after, and it went on like that until late into the night. That day (it was Thursday if I remember it correctly, although I am not sure that the 24-hour market was reserved for Thursdays only), the bustle took place up until 1 am!

My hotel was in the same street and I have heard few tourists complaining the next morning that the market noise was to be heard even until 3 am.

This is actually not that bad idea if you have in mind that raw food cannot be preserved easily in such a heat (and I was there in May).

Posters of the president

Damascus and the whole country accordingly was covered in posters of the president Bashar al Assad, who took over the power from his father Hafez. The family is ruling the country since 1970’s. If you have had a chance to travel to other Arab countries, this will not come as such a surprise since you have probably seen pictures of a king or sheikh in the United Arab Emirates or Jordan, smiling from posters all around.

Haggling and buying groceries at night

It was similar here. In Damascus, for example, I have walked by one building with every one of the windows being closed and covered in portraits of the president-father and the president-sun. Their smiling faces appeared before me from every street pole I came across, every shop glass and even every car windows. The president was also greeting us from the posters at the border, saying „thanks for visiting“ and „have a good trip“.

0 comments on “Homage to Syria: DAMASCUS, THINGS TO KNOW (3)”