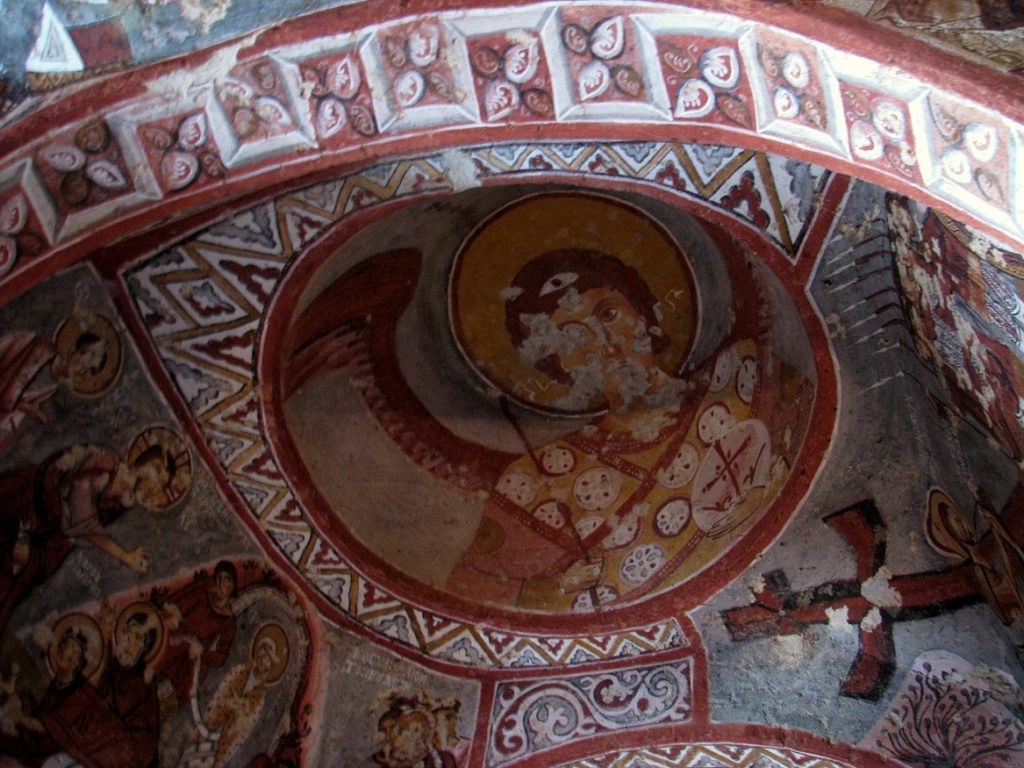 Coming towards Goreme signs of tourism are to be seen more often. Stalls with postcards, small souvenir statues, scarves, frippery of all kind and among all this – Turkish ice cream. We went up the hill from which the fairy chimneys peek out, full of holes as if they were invaded by ants. But here, behind these small holes, the churches are built in the caves. Some of them host greatly preserved frescoes while in others there are only traces of them.

You may have to wait for your turn to enter since these places are always chock full of tourists and originally were not supposed to host that many people. If you go in summer, keep in mind that there are only rocks around you, so do come with some water supplies and a hat.

The guide will take you from one church to another and it will surely make you a bit dizzy, not being able to remember all those names and frescoes. So, do get one of those Cappadocia guides that you can buy at any stall in the valley. They will come handy.

There is not enough room to list all the churches found in the valley, but here are some we have visited.

Elmali or Apple Church was built in stone and it is located on the top of this open air museum. There are four pillars in the central room. A lot of frescoes are well preserved, while others are lost. Christ is depicted on the dome and on the walls there are the scenes of Baptism, Entry into Jerusalem, Last Supper, Crucifixion and Betrayal of Judas.

In one of the frescoes Jesus is painted holding a round object in his hand that resembles an apple. Thus the name the Apple Church given by locals. Some researchers believe that the object represents the globe, the world itself.

One of the most interesting church because of its frescoes characteristics is the Church of Saint Barbara.

It dates back to the 11th century and is decorated by paintings of St Barbara, St Michael and St Theodore. But along those there are geometrical motifs, mythological animals and various symbols.

The paintings were directly applied to the rock in red ocher. Although the entire church was carved out of the rock, there are red lines on the walls to give the impression that it was built using cut stones.

The best view of Goreme valley is by far from the town of Uchisar and its castle on the hill. The town is located at 2 kilometers from the settlement of Avchilar, the area in between being covered in vineyards.

Tourists at the Uchisar Castle terrace

Cappadocia is well known for its wine as well and it is possible to go wine-tasting in one of its cellars. There you can buy their original wine, but also all sorts of wine-serving tools and souvenirs.

Next: SPINNING THE WHEEL OF POTTERY (13)