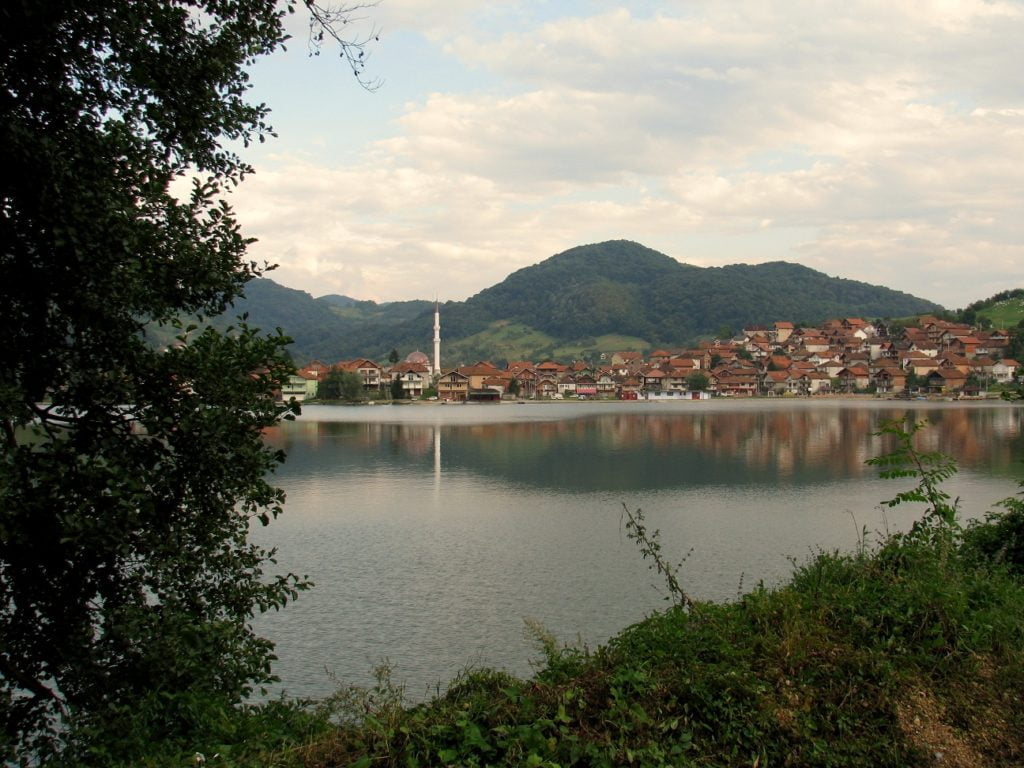 When you go further towards the town of Mali Zvornik, that is when the river Drina starts to appear here and there. The road was obviously patched numerous times, making my French “lion” jounce.

View of lovely Bosnian bank on the other side

When you enter Mali Zvornik you begin to enjoy the view on your right. It seems as if town’s buildings are going to tumble down into the river. On the other, Bosnian side, the same scene – houses leaning downwards.

The road curves along the flow of Drina and the shore is often covered with overgrowth. On those scarce spots where trees and bushes are not that high and thick, wide river is to be seen with white minarets ascending on the other side. Few fishermen in their boats and tall, green mountains above. Drina was really generous in this area!

„The Save is the largest tributary of the Danube, and the Drina is the largest tributary of the Save, but it is not navigable; no river scenery, however, can possibly be prettier than that of the Drina; as in the case of the Upper Danube from Linz to Vienna, the river winds between precipitous banks tufted with wood“, says Andrew Archibald Paton whose 19th century book we carry around with us.

River that curves on

He must have had even better impression. Just imagine trotting slowly on horse’s back through these forests and over green hills, while the view on such generous and lush nature on both sides of Drina takes your breath away on every kilometer!

Even though we were limited to the road, it didn’t spoil the experience. We stopped the car every now and then to enjoy the view of the river spreading and narrowing itself, cutting through the earth in a manner only nature can provide.

„At Liubovia the hills receded, and the valley was about half a mile wide, consisting of fine meadow land with thinly scattered oaks, athwart which the evening sun poured its golden floods, suggesting pleasing images of abundance without effort.

Fishermen in their boats

This part of Servia is a wilderness, if you will, so scant is it of inhabitants, so free from any thing like inclosures, or fields, farms, labourers, gardens, or gardeners; and yet it is, and looks a garden in one place, a trim English lawn and park in another“, Paton wrote.

We drove into Ljubovija over some bridge, and were explained that „the center is near, just a bit down the street“, but we have managed to miss it. Actually, we were there the whole time, the town was just small. Since it was late in the afternoon, we didn’t even bother trying to locate tourist information office – there was no way it would work at that hour. Asked around if there is a place to stay for the night. (More about it in the previous Glimpse.)

The story about the small town on river Ljubovidja (which it was named after, they say), begins in 1843 when the former settlement Azbukovica was liberated from Turks and became border area. The passageway was opened, people and goods were transferred by wooden rafts, there was a quarantine station, large stockroom was built, and soon people began to inhabit the region.

After it suffered serious damage by the flood in 1896, the town was moved few kilometers up the hill and a bit further from Drina’s bank, towards the hill of Jabuchje.

„Liubovia is the quarantine station on the high road from Belgrade to Seraievo. A line of buildings, parlatorio, magazines, and lodging-houses, faced the river. The director would fain have me pass the night, but the captain of Derlatcha had received notice of our advent, and we were obliged to push on, and rested only for coffee and pipes“, says Paton.

Closing the book, we have decided to spend the night at the small hotel. It took a certain undertaking to drag a suitcase up the narrow and steep staircase though, but it did have the parking lot right in front of it.

Time for a stroll around Ljubovija. Down the same street, as we were told, there is the only working restaurant where we could eat and next to the bus station there were few cafes. It wasn’t very appealing to sit on the balcony of one of those, looking at noisy buses coming and going, so we took a turn and walked up by the Church of the Holy Transfiguration.

Church of the Holy Transfiguration in Ljubovija

At first nobody but us sitting inside that small restaurant. And the waitress was talking.

„This was a crowded town once. Since all the factories were closed, everything stopped, young people went away. We were often going to the other side of Drina, which is now Bosnia, spending time with friends, having barbecues. Now, well, I don’t even remember the last time we were there. People have changed, some strange men came to the scene“, she was saying.

Our grilled meat was good, cheap, waitress was pleasant. The sky began to darken, they said it might rain tomorrow. Oh well, that means that we would not go to the old town of Soko, not this time anyway, even though our British companion was astonished by it. So, we will make a note for our next trip to Ljubovija – not to miss Soko, but Treshnjica Canyon and the Latin Bridge as well!

Such beautiful view of the mountains and rooftops through our window in the morning! It was worth spending a night here.

Didn’t mind being „a spectacle“ in the town where people scarcely come just to visit, for the mere reason of traveling. I mean, such play of clouds and mist from nearby mountains was wheeling down onto lined up houses at dawn, that we simply forgot about everything else!

Moving on from this small town, back on the road, it began to rain, changing thus our previous plans. Mr Paton went towards the town of Uzice, but we might go a bit more to the south, along Drina’s curves, to stop at Bajina Bashta town first.

Next: UNFAMILIAR FACE IN A SMALL TOWN (15) 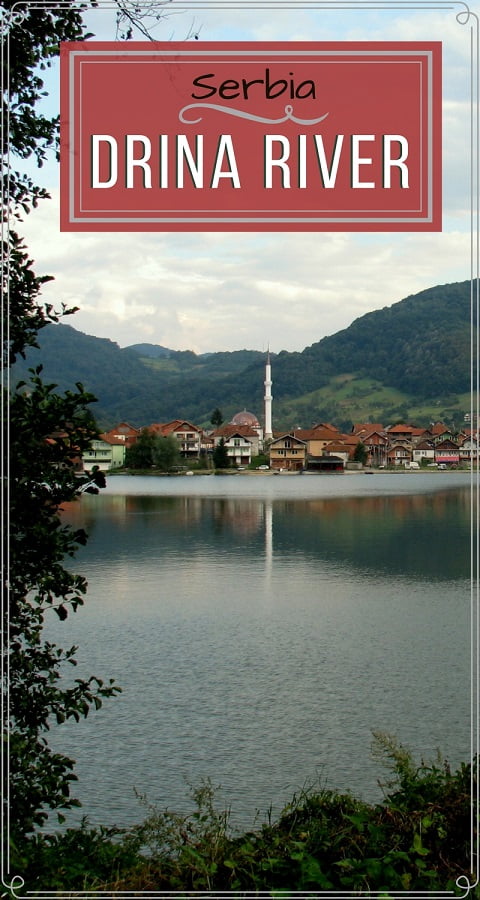 0 comments on “Serbia: LAVISH NATURE ALONG THE RIVER (14)”

This is a detail from the Abu Darwish Mosque in Am

We had a short chat about presents this year. Havi

One of the things I love about Lisbon is its disco

This isn't Andalusia but Barcelona! 🤗 The famou

Throwback to my Andalusia journey. This is Madinat

No wonder one can find Roman ruins in Old Damascus

This is the famous Bosphorus Bridge in Istanbul, a

Here is another one of those "Find Danijela" autum

They say that Avenida Campo del Sur in Cadiz Spain


Error: API requests are being delayed for this account. New posts will not be retrieved.