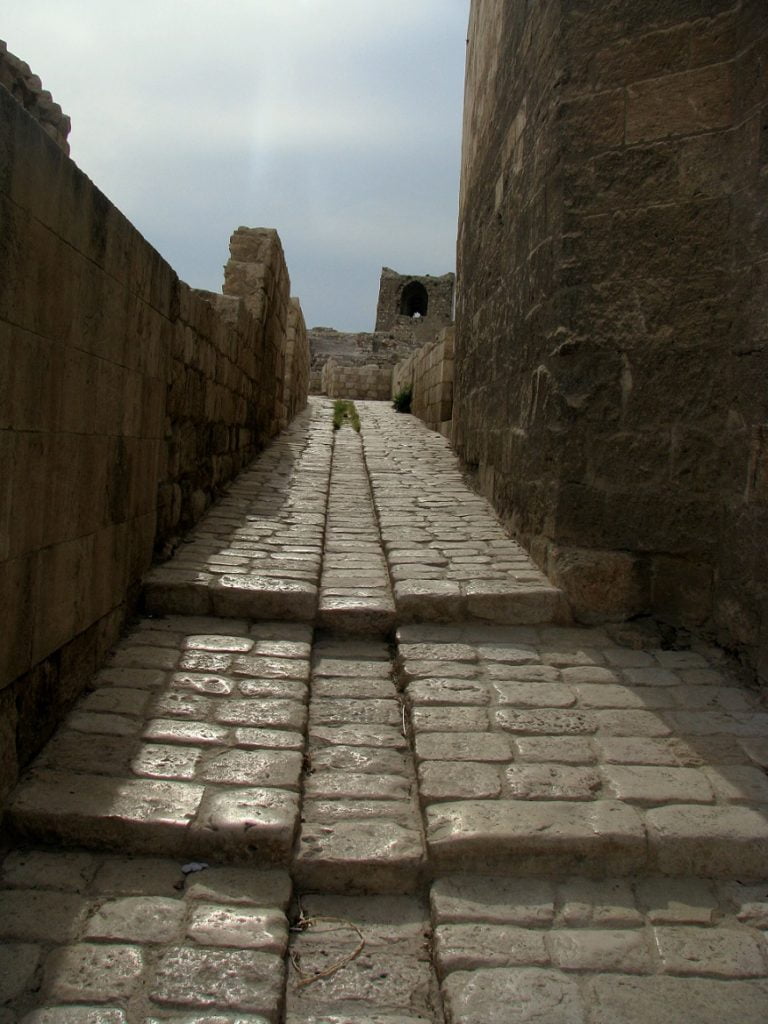 Aleppo is the city in the northern part of Syria, and besides Damascus it is one of the oldest settlements in the world. Before the war, it was the town full of tradition and monuments that exuded history. This city was the capital of the mighty Yamkhad kingdom until the 1780 BC when it fell under Hittites’ control. And it continued to be the target for various other conquerors throughout history.

Surroundings of the Citadel

In the 4th century BC the town was called Beroia. The first city plan was made back then, the one that could be recognized before the war east of the Antioch Gate. This town was extremely important for Greeks and Romans, followed later by Arab and Muslim invaders. Meanwhile, Aleppo developed into one huge trading center and the town where pilgrims on the way to Mecca usually took a break.

The main entrance into the fort

Thus, it is deservedly referred to as – the Gate of Asia!

When the town flourished in the 10th century AD, the original plan of the famous Citadel came into being, the structure Aleppo was known for worldwide. This fortress was described as „the most spectacular medieval structure in the Middle East“ and it was still proudly standing before the recent war, defying ravages of time.

Passing through into the courtyard

The Citadel is located on the 55-meter hill, dominating its surroundings, imposing in size. Because of the specific position, it was considered to be a threat to town authorities since it was separated, enough to have its own government, and yet, it was still in the center of the town. Hence, it was under constant supervision. At one point the fortress even had its own governor who answered to the authorities of the city.

This is where the Mosque and the Royal Palace once stood

There were numerous traces of religious and civil monuments in the Citadel which were unfortunately vastly destroyed by the earthquake in 1822. (Nowadays, they are seriously damaged.)

But the remains of the old public bathroom from the 11th century could still be found before the war, along with traces of the Grand Mosque founded by the Umayyads, and the Royal Palace.

Ancient steps inside the fortress

The first thing that struck me when approaching the fortress was by far the deep trench that surrounded it, separating it from the rest of the city. There was the long medieval bridge which was once the only way to get into the fort, followed by the huge iron gates.

The trench was dug out during the Ayyubids rule and, even though the town got seriously damaged by the Mongols in 1260, it soon rose up again.

The fortress could receive about 10,000 people and it was fully supplied with all the things inhabitants might need on daily basis.

The construction that was visible before the war in Aleppo actually got its appearance at the beginning of the 13th century and it was built onto the ruins of the early Byzantine fort.

Passage towards the tower

In order for invaders to reach the premises of the fort’s governor they were supposed to go through the lateral gate where no tools could be used for breaking down the door because of its position. If by any chance they would succeed to go through the gate on the bridge and would try to break in, boiling oil and stones were thrown at them from fort’s walls. Even if they were to overcome this obstacle, they were still supposed to follow the narrow corridor one by one where they would come across men with sabers.

Tower of the Citadel

Besides these rich and unconquerable premises, the fortress has housed bathrooms, the mosque, markets etc. Once I found myself here, I have just tried to imagine what the town was like back then – on the hill, heavily fortified, completely safe, fully supplied.

I touched its walls and could feel that I was standing on the very spot where the capital of the mighty kingdom stood 4,000 years ago!

Great view of the city before the war

When I climbed up to the Citadel, I took a walk around the fort and gazed at the town below. That is when I felt the power of the place, being aware of the strategic importance of the fort’s position, since down there, look – there was the whole of Aleppo, the whole town on the palm of my hand!

Next: ALEPPO BEFORE THE WAR (5) 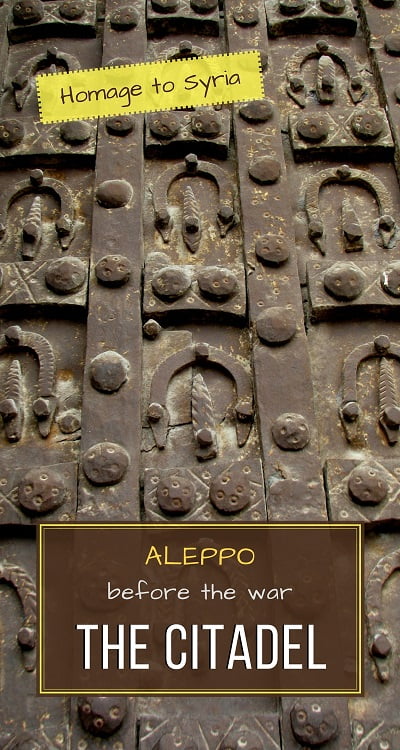