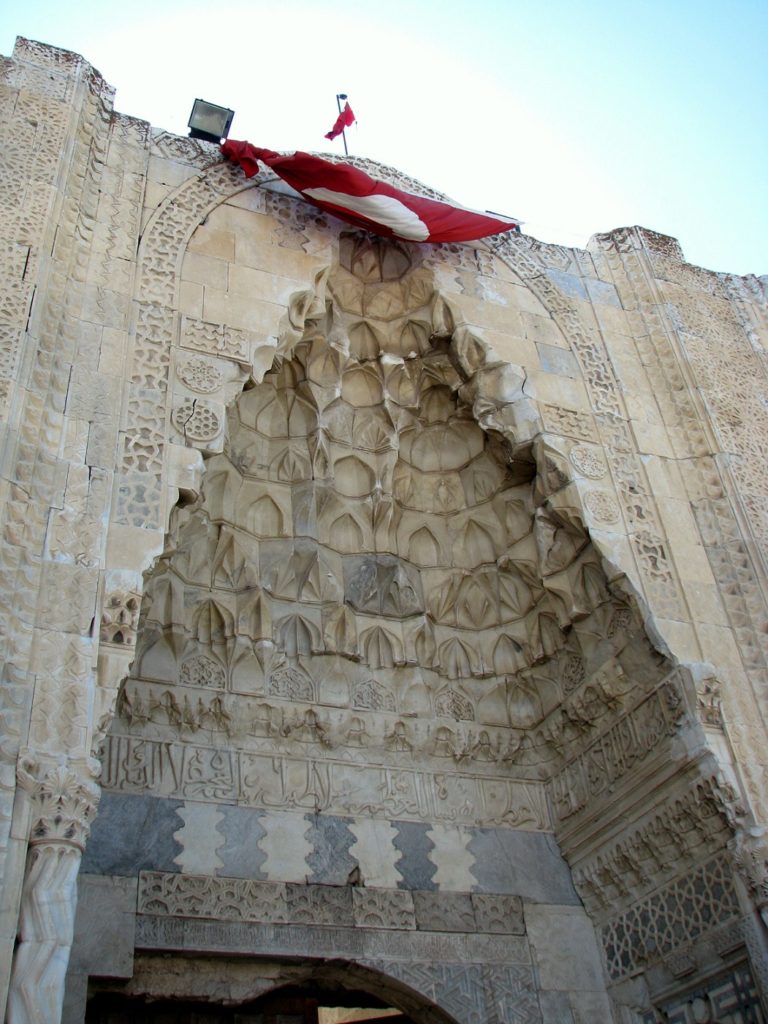 We went for another 110 kilometers from Konya and there is still a lot of bus-jouncing to do before we reach those chimneys in Cappadocia. There is no way to remember how far it is, since all of our focus went down towards tired feet and a bit of a back pain. Never the less, Turkey is one vast land and the best way to see it is by a car or a bus. So, let’s enjoy the ride, the road signs were already showing that we were entering the Cappadocia Region after all.

And then – another coffee break, just in time! Stopped in front of a huge building with marble relief above its gates. A cafe next to it with the real Turkish coffee (and you should emphasize if you don’t want any sugar in it, since “the real Turkish coffee” is just that – a lot of sugar in a cup!). Benches covered with traditional colorful rugs. Great way to take a break after all that jouncing and shaking.

But first, entering that imposing massive structure is a must!

Breath of hope in a bleak valley

Let’s just say that we are at this lonely post on the road from Konya to Aksaray, which used to be a place for much needed break in the middle of vast and bleak valley, and on the famous Silk Road root. Seljuk Sultan Alaattin keykubat I built this caravan post during the years of 1229 to 1236. Thus the name of Sultanhan, where han actually refers to the caravanserai or a post for camels and merchants to rest.

When being damaged by fire 40 years after it was built, this caravanserai was renovated keeping the original appearance up to this day. Sultanhan is the biggest one of its kind in Turkey!

This tourist attraction motivated people to settle nearby and so today, there is a small village surrounding it. It is called Sultanhani and it’s filled with all the supplies – stores and goods from local craftsmen, restaurants, cafes, gas station. All you need to stop for when travelling. Just like those caravans used to, right!

Sultanhan is a typical example of Seljuk caravanserai with decorated gates, simple and massive marble walls. While going through the corridor towards the courtyard one has to feel the chill breeze from within that deep shade of massive walls. The courtyard is paved with stone blocks. Surrounding it, numerous premises that used to be “banks”, dinning rooms, bathrooms, equipment repairing stores. Small mosque in the center, higher above the commotion of men and animals, with simple stairs for worshipers.

The courtyard of caravanserai

On the right side of the gate there is a room for goods disposal were merchants used to sleep during summer. At the end of the courtyard there is a huge hall with numerous entrances with four lines of pillars and arches above. At the very center you can see a dome dotted with small windows to let the light in. Pleasant chill overwhelms you – much needed when traveling during Turkish heat.

Caravanserais were used since the 10th century. Trading from one part of Turkey to another in Seljuk medieval times depended upon those camel “trains” or caravans. They had to stop and rest for the night in these camel-posts or caravanserais. The buildings offered lodging for men and animals.

Wooden tools in the shade

Firstly they were called ribati, being small houses for military purposes, but they later grew into huge structures with sleep-overs. Although the relief motives mostly depicted dragons, lions or some floral details, those typical for the Cappadocia Region were geometrical shapes. Huge doors resemble some castle gate made of iron.

During the rule of Seljuk Sultan Kilikarslan II and Alaattin keykubat I these constructions rose in their magnificence while road safety was guaranteed by the state. It often compensated the value of eventual loss in merchants’ goods which is depicted as certain forerunner of insurance policies. And so, Seljuk Turks who were strong in economy gained great political influence this way…

What a nice coffee break! 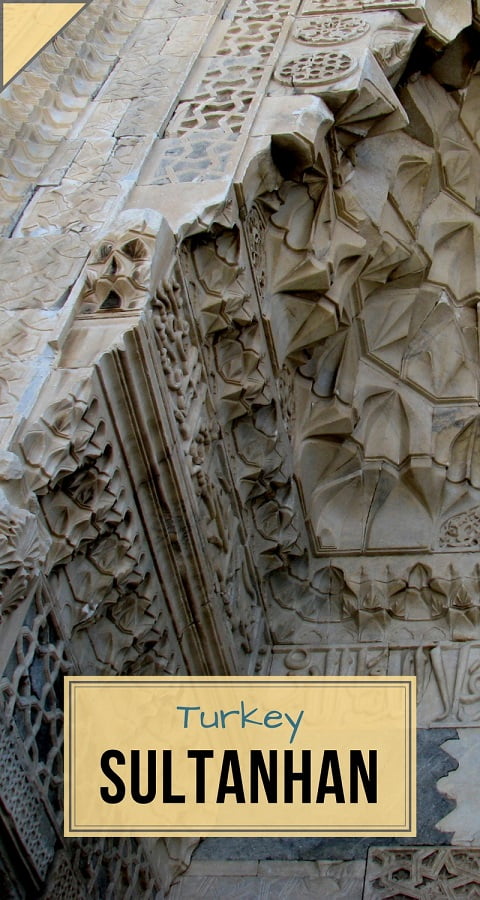 Cappadocia: IMAGINE A NIGHT IN CARAVANSERAI (5)

Cappadocia: WHO ARE WHIRLING DERVISHES (3)

Cappadocia: CARRYING RUG HALFWAY AROUND THE WORLD (15)
« Cappadocia: IMAGINE A NIGHT IN CARAVANSERAI (5)
Cappadocia: WHEN YOU GET TO „NOWHERE“ (7) »